“I’d become a little disappointed in a lot of big movies.” 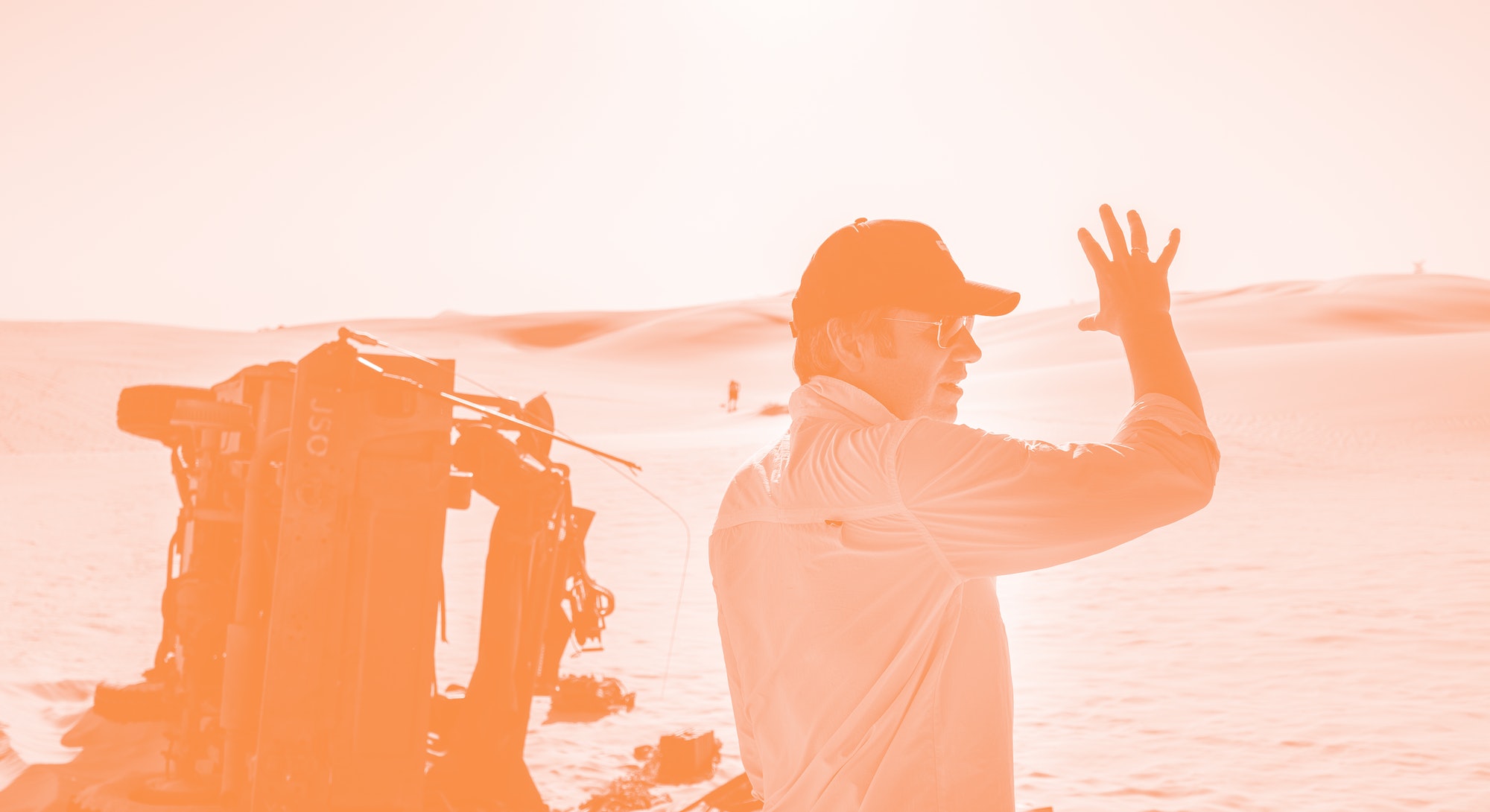 Paul W.S. Anderson is not messing around.

Like practically all the previous feature efforts by the noted action-pulp stylist, Monster Hunter (now in theaters) delivers upfront on the lean, unpretentious pleasures promised by its premise. In just the first 20 minutes of the filmmaker’s latest video-game-to-movie adaptation, we watch an elite military regiment led by Captain Natalie Artemis (Milla Jovovich) get...

“This film has an express-train feeling to it,” Anderson tells Inverse, speaking via Zoom alongside his wife and star actor Jovovich.

He’s describing Monster Hunter, but he might as well be talking about any of the movies that have made Anderson and Jovovich one of the most successful and most misunderstood duos in modern Hollywood.

An adaptation of Capcom’s other massively popular video-game series — the one that’s not Resident Evil, which Anderson previously architected into a six-film franchise, also starring Jovovich, to the tune of $1.2 billion — Monster Hunter finds Anderson again paired with his wife of 11 years for the kind of relentlessly maximalist yet economically directed spectacle that has led many to hail them as reigning sovereigns of the video-game adaptation.

It’s been 25 years since Anderson’s first such film, 1995’s Mortal Kombat, hit theaters and claimed the top spot at the summer box office, staying there for three weeks. And with Resident Evil unlikely to be dethroned anytime soon as the highest-grossing film series based on a video game, Anderson has cemented his status as the master of this typically disreputable subgenre.

What’s the secret to his success? In a field dominated by scathingly reviewed box-office bombs, Anderson’s video-game adaptations stand apart as consistent commercial hits that, though largely dismissed upon their initial release, have been enjoying a recent critical reappraisal.

Guided by his keen compositional eye, Anderson’s films – including those not based on video games, like space horror Event Horizon (1997) and disaster melodrama Pompeii (2014) – are filled with careful geometric framings and knock-out action sequences that feed into one another to create a sense of game-level progression.

Few action directors can craft movies that move quite like Anderson’s, whose gift for cleanly and inventively mapping out visual spaces, from booby-trapped corridors to underground pyramids, is complemented by the devil-may-care dynamism with which he then sends his characters running, jumping, and tumbling through them – often pursued by monstrous adversaries or unseen puppeteers.

Discussing the divide between video games and film across which his body of work is acrobatically perched, Anderson says that “at their heart, they’re very different experiences,” drawing a distinction between “investing 100 hours into a video-game, maybe playing by yourself” and “the communal experience of watching a movie over two hours.”

“They both have strengths and weaknesses you can take and combine,” he says. “Even in the shooting style of the films, we try to use a video-game narrative and camera. We’ve definitely taken a lot from video games in terms of the movies’ style, but we’re not just taking bits of the video game and grafting it onto a movie aesthetic. We’re trying to meld the aesthetic of the video game and of cinema.”

This giddy intermingling was on display in Mortal Kombat, where bodies were centered twisting and turning in Anderson’s slow-motion tableaux, mirroring the game’s easily recognizable aesthetic. Even before Resident Evil, Anderson was incorporating video-game aesthetics into films like Event Horizon, which constricts as it descends through its maze-like spacecraft, and 1998’s Soldier, in which Kurt Russell’s mute one-man army resembles the audience avatar in a side-scrolling shooter.

Though he approaches their execution seriously, there’s a refreshing lack of ostentation to Anderson’s action sequences; rarely does he linger on a sequence long enough to suggest he feels he’s done something properly artistic. In this way, Resident Evil and Jovovich are both perfect foils for the director’s style: unsentimental, laser-focused, and constantly mid-motion. Much like video games, Anderson’s films introduce elaborate game-boards his characters must maneuver; spatial and geographic considerations are prioritized over plot logic or emotional heft.

Across his career, Anderson has also taken industry advancements in stride, utilizing wide-screen aspect ratios from 2004’s Alien vs. Predator onward and cleverly incorporating 3D into his filmmaking even as other Hollywood filmmakers dismissed the stereoscopic format as little more than a studio-imposed nuisance. (Look to Resident Evil: Afterlife‘s bathroom brawl between Alice, Ali Larter’s Claire Redfield, and a hulking Axeman for a particularly impeccable example of Anderson’s deep-focus staging and spatial construction working to position the viewer practically inside his frame.)

If the Resident Evil movies were all essentially chase films, albeit ones that grew increasingly subversive in their approach to the series’ main ideas of reincarnation, autonomy, and escape from corporate control, Monster Hunter is that as well, but also Anderson’s equivalent of a David Lean desert epic.

Shooting on location in South Africa and the harsh deserts of Namibia, hundreds of miles from the closest towns or villages, Anderson and his crew lived in tents. They braved high winds and scalding temperatures to complete the film’s principal photography.

“I’d become a little disappointed in a lot of big movies,” explains Anderson of his decision to shoot away from Hollywood’s cost-efficient green screens. “You get to the third act and, suddenly, what was a live-action movie seems to turn into an animated film, where you know you’re looking at something completely synthetic. That doesn’t stop it from entertaining, but it doesn’t really convince you, and it doesn’t feel real.”

“a return to old-fashioned filmmaking”

The last film Anderson shot on location was Mortal Kombat, when he traveled to Thailand and shot scenes in the country’s temples and beaches to achieve the film’s mythically exotic look. “I thought, ‘Ah, this is great! This is going to be my career, going to all these amazing places and shooting these amazing landscapes,’” he recalls. “And of course, it didn’t turn out quite like that. I ended up going to a bunch of derelict cement factories and shooting in there – which I thoroughly enjoyed! But this movie, for me, was a return to old-fashioned filmmaking.”

“Paul made it so realistic because of the incredible locations he took us to: so far from any human habitation, so untouched by man,” Jovovich tells Inverse. “They were unearthly; it felt like we were walking on another planet.”

With their sweeping vistas and marauding beasties, the external desert sequences of Monster Hunter recall Ray Harryhausen’s Jason and the Argonauts more than any film of Anderson’s since Mortal Kombat. In contrast, despairingly dark caverns populated by the Nerscylla are reminiscent of the elemental nightmare sequences evoked by German Expressionist director Fritz Lang (Anderson’s favorite filmmaker) in his silent Die Niebelungen: Siegfried.

Whether he’s gleefully upping the gore quotient to make his version of Alien’s infamous chest-burster kill or tearing through action set pieces in an effort to channel the terminal velocity of George Miller’s similarly sun-scorched Mad Max: Fury Road, Anderson’s influences run amok throughout Monster Hunter. But then again, why shouldn’t they? More than any past film he’s made, this one finds Anderson hard at play in a literal sandbox.

“Obviously, when you’re shooting in massive landscapes, you don’t have the same sense of claustrophobia,” he says. “But what I did try to do was put people within smaller boxes within those landscapes; it’s a classic Western thing to do, going back to John Ford and The Searchers where you have the epic landscapes but what’s really beautiful is seeing John Wayne walk out of a doorway.”

To achieve this effect early on, Anderson relied on the physical framing of the military unit’s Humvees, at first distancing characters from their surroundings through windshields and mounted guns, and later using contrasting angles to encase them within the vehicles, trapped like fish in a barrel. “I tried to alternate the really vast landscapes with a sense of claustrophobia,” he adds.

Though the film relied on CGI to create the towering beasts of Monster Hunter, relatively little footage was shot against a green screen, meaning Jovovich and the actors were thrust into physically strenuous situations almost daily.

“Paul had created these sand cannons they’d shoot at us,” Jovovich says. “To simulate the monster running or stomping next to us, we would get blown by this sand cannon with tonnes of sand and get literally thrown back by it.”

Anderson first encountered Monster Hunter more than a decade ago, at which point the Capcom action RPG was relatively unknown outside of its native Japan, where it was already a smash hit. Playing the game for himself while traveling through the country, the filmmaker was struck by Monster Hunter’s detailed imagery and epic scale.

The filmmaker was particularly floored by the creativity with which every creature in the Monster Hunter universe had been conceived, from their distinctive physical appearances to the striking habitats they populate. Hundreds of species stomp, soar, and skitter across the Monster Hunter franchise’s sprawling environs, which themselves range from lush jungles to parched deserts. “I felt immediately that there was a lot of cinematic potential,” Anderson says.

“I had a genuine sense of wonder when I immersed myself in that world for the first time. If someone had been shooting me at the time, I would have looked like Sam Neill from the first Jurassic Park: all slack-jawed and excited.”

Many of Monster Hunter’s characters were lifted directly out of the games, including Tony Jaa’s Hunter (who forges a close allegiance with Artemis throughout the film), Ron Perlman’s gloriously maned Admiral, and a faithfully replicated version of The Handler (played by Hirona Yamazaki). Franchise fans will be particularly gratified to see Meowscular Chef, a flirtatious feline-humanoid fighter and one of the games’ more beloved figures.

The biggest original creation is Artemis herself, whose military background as a U.S. Army Ranger lend the proceedings a gritty, gun-metal realism. Anderson wrote the role with Jovovich in mind. Though she was skeptical about transitioning from fending off zombies in Resident Evil to taking on monsters in Monster Hunter, his insistence that Artemis be a real, flesh-and-blood soldier was what ultimately convinced her.

“Both sides of my family have very deep military backgrounds; my mom grew up as an army brat in Russia, and on my father’s side there were generations of war stories,” Jovovich says. “I always joked with my family that, if I hadn’t become an actress, I would have joined the military.”

Playing an array of death-dealing action heroines on screen, from Leeloo in The Fifth Element to Alice in Resident Evil, Jovovich has essentially split the difference. Particularly through collaborating with Anderson, the actress has been elevated into a globally identifiable symbol of charismatic kick-ass, her sharp features and intense glare a natural match for characters whose balletic grace and hard-wired physicality are more character-defining than any glimmers of backstory.

If the Resident Evil series can be read as an extended metaphor for one woman’s liberation through continual resistance and self-discovery, as some have suggested, much of the credit for that is due to Jovovich’s performance: highly athletic, yes, but also wearily determined, in defiance of her shifting, often surreally engineered reality.

Jovovich hadn’t played a human-sized character like Artemis, a warrior by choice who trained extensively to earn the distinction. To research the role, Jovovich ran combat simulations with soldiers at Fort Irwin, outside of Los Angeles, and became connected with Captain Natalie Mallue, one of the few women to pass the US Army’s Ranger school and consequently earn its elite tab. Mallue, who served as Monster Hunter’s military advisor, discussed with the actress not only the physical and tactical training she’d need to portray a Ranger, but the reserves of psychological strength required by the rank.

“There are women like her who can do these extraordinary things, that are strong but also real and relatable,” says Jovovich. “There’s nothing supernatural about them; they weren’t made in a laboratory. They created themselves.”

Monster Hunter is in theaters now.