'The Mitchells vs. the Machines' almost had a Spider-Man cameo, director says

"This is harder than Spider-Verse.” 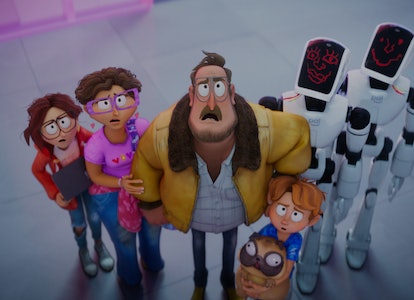 To make Spider-Man: Into the Spider-Verse, Sony had to invent new types of animation technology. The result was a stunning, Oscar-winning film that blurred the line between cartoon and comic book. But at the same time, Sony was making another animated film that took the same tech from Spider-Verse and used it to do something very... weird.

The result is The Mitchells vs. The Machines (out now on Netflix), the story of a dysfunctional family that comes together to save the world from a robot apocalypse. Director Mike Rianda tells Inverse that to make his movie, Sony Pictures Imageworks had to completely rethink its approach to Spider-Verse to create a film full of “wrinkly and lumpy” humans.

“They took all those tools on Spider-Verse, and they kind of just like, bent them,” Rianda says.

For example, in Spider-Verse, the shadows are made up of dots, which gives the film a comic book look. But in The Mitchells vs. the Machines, those dots are replaced by digital paintbrush strokes.

“It’s really subtle,” Rianda says. “You don't notice it ever, but hopefully when you just look at the movie as a whole, you're like, this is wild, what's different about this?”

Another big different between the two films? The character design. Spider-Man into the Spider-Verse is full of sleek superheroes. The Mitchells are about as far away from that as you can get. Despite being animated, they look like a real family full of real, weird-look people. That posed a unique challenge to the team at Sony.

“It's hard for a computer to do wrinkly and lumpy,” Rianda says.

The biggest challenge, however, may have been the creation of Rick Mitchell, the family’s inept but well-meaning patriarch voiced by Danny McBride. With a top-heavy design and a mess of hair, Rick might just be the most ambitious Sony Animation character to date.

“For Rick Mitchell, they were like, This is Sony's most expensive character we've ever had,” Rianda says. “We were like, His beard hair needs to be more uneven, and they're like Jesus. But I'm really glad we did it because when you see the movie, the people come off as as almost made by hand and it emphasizes their humanity, hopefully.”

According to Rianda, visual effects supervisor Mike Lasker (who worked on both films) even admitted that The Mitchells vs. the Machines was the more difficult of the two.

“I don't know if he would still cop to this,” Rianda says, “but at the time, he was like, ‘This is harder than Spider-Verse.’"

So given the close proximity of the two films, will we ever get a crossover? Could Rick Mitchell show up in Spider-Verse 2? Rianda’s not ruling anything out. In fact, he almost managed to sneak his movie into the Spider-Man animated universe during production

“I remember trying to get like a kind of disheveled lumpy Spider-Man in the background of a shot,” Rianda says, but people were like, Look, we got to finish the movie. But I definitely think that's possible. Maybe there's The Mitchell's Into the Spider-Verse or The Mitchells vs Spider-Man.”

The Mitchells vs. the Machines is streaming now on Netflix.