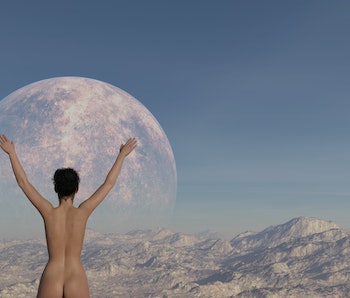 Hello to you! Before you kick off your holiday by catching up with old friends or ditching a former flame, take a look at the latest.

We’re here to spice up your Thanksgiving dinner convo with weird findings about a dust storm on Mars, news about the Tesla Cybertruck, and a frankly shocking way to sunbathe that you’re welcome to try explaining to your extended family.

Plus, please don’t feed these “people foods” to your pets. ↓ They’ll thank you later (not really).

I’m Nina Pullano, Earth and climate science writer at Inverse, and this is Inverse Daily. Here we go.

“When a person smokes, they will only feel disgust, and they would hopefully be helped to quit forever.”

— Taryn Greider, a scientist at the University of Toronto.

Born in the USA

Between the ages of 25 and 64, many people are chasing career goals, creating families, traveling, and volunteering. Mid-life is often the most productive time of our lives, but new research shows working-age Americans are dying prematurely, especially in economically unstable regions around the country.

“Working-age Americans are more likely to die in the prime of their lives,” says Stephen Woolf, author of the study and researcher at Virginia Commonwealth University. This affects the personal and the practical, Woolf says. The American workforce is dying prematurely, jeopardizing economic growth. In turn, children are losing their parents, and he says, “our children are destined to live shorter lives than us.”

Woolf and his team write that the rising death rates can be traced back to increasing rates of suicide, alcoholism, obesity, and the opioid crisis. In economically depressed regions, people can suffer from “deaths of despair” caused by these behavioral health risks. People drink themselves to death, suffer fatal drug overdoses and mental disorders, or take their own life to cope with mounting stress, economic pressures, and lack of opportunity. Deaths of despair are threatening young and middle-aged people of all races in these regions.

Here’s what the research says →

More reports from the heartland:

Here’s something to talk about this Thanksgiving: perineum sunning, also known as “charging up,” or “butt-chugging sunlight.”

Let’s back up. Earlier this week, a tweet containing pictures of the practice went viral. The tweeter was in disbelief, while the butthole-exposer was seemingly sincere. She claimed that “30 seconds of sunlight on your butthole is the equivalent of a full day of sunlight with your clothes on!” and the internet collectively scratched its head.

Naturally, Inverse investigated, and while that 30-second claim is unfounded, it’s not so crazy to think that exposing more of your skin would lead to more vitamin D synthesis per minute. That’s according to Dr. Joshua Miller, professor and chair of nutritional sciences at Rutgers. So, if you want to indulge, we won’t judge. Just be careful you don’t get sunburned, and try it out in practice.

When you’re ready, here’s the science behind perineum sunning →

Unleash the power of the sun:

In May 2018, NASA’s Opportunity rover lost its life in a haze of a massive dust storm that covered the entire surface of Mars. Scientists have been analyzing the data collected from a squad of Martian orbiters, and two recent papers shed light on the massive dust towers that emerge from the storm.

The findings suggest that the towers, which go up to 35 miles above Mars’ surface, carry water molecules along with them which could provide answers to why water disappeared from the Martian surface billions of years ago.

The 2018 dust storm was among the worst the planet has ever witnessed, sending up a fury of dust towers that lasted close to four weeks. Understanding the composition of the dust towers could provide better clues as to how water molecules escaped Mars, possibly shooting up close enough to solar radiation that caused them to evaporate.

The latest on Opportunity’s postmortem →

Hey, we’re starting something new and you should be the first the know.

You’re a few clicks away from getting the best tech reporting on the internet – delivered directly to your inbox.

There’s nothing more guilt-provoking than puppy eyes staring up at you while you’re just trying to finish your plate. But while you might feel like a monster not sharing with your pet, caving to the insistent demands for treats could be far worse.

A surprising number of Thanksgiving staples could make your dog or cat sick; some are even toxic in tiny doses. Some of our most beloved holiday spices and ingredients are super harmful to pets, so take a look at this guide before you start handing out table scraps.

Read what NOT to feed your fur babies →

Tesla is entering a new phase in its short 16-year history, and that means there probably won’t be any new product launches like we’ve seen over the last five years.

The polygon Cybertruck rolling onto the stage last week was the high water mark for Tesla’s product debut cadence.

It had everything: a characteristically awkward Elon Musk rolling through the key bullet points, surprise high-tech features, details about sustainable energy and autonomous driving, objects smashing into materials (hello, Solar Roof), and even an unexpected reveal for the end. (ATV, anyone?)

More on the Cybertruck saga:

Water scarcity is a pervasive problem around the world, with more than 2 billion people lacking access to clean drinking water. New technology in Kenya, created by the NGO GivePower, could help address that issue for 35,000 people per day.

The organization installed a solar-powered desalination plant in Kiunga, on the eastern coast of Kenya. Turning saltwater into fresh drinking water takes a lot of energy, which can trip up new systems. Solar panels can help solve that problem.

That’s all for today — thanks for reading, and Happy Thanksgiving! If you’re going out tonight, be safe out there, and don’t be afraid to bring up that weird thing from high school that feels like it needs closure.

Thoughts? Send me a note at nina.pullano@inverse.com. We’re off for the rest of the week. See you back here on Monday!