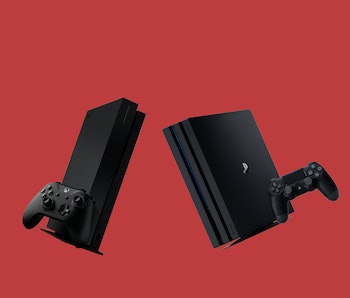 The PlayStation 5 and Xbox Project Scarlett will soon duke it out in yet another generation of the console wars. Sony and Microsoft have already revealed some of the secret sauce that both of their upcoming consoles will ship with. Now, Microsoft has just confirmed a feature its new Xbox won’t include.

We already know cloud gaming will be a big priority for the next-gen Xbox. But on Tuesday, Xbox chief Phil Spencer told Stevivor the Project Scarlett won’t support virtual reality hardware, just like the company’s current-gen consoles. That’s in stark contrast to the PS5, which is anticipated to eventually receive new PSVR hardware after its late 2020 launch.

Spencer explained he believes VR technology doesn’t yet provide the types of shared experiences he wants to create with Xbox Scarlett.

“I have some issues with VR — it’s isolating and I think of games as a communal, kind of together experience. We’re responding to what our customers are asking for and… nobody’s asking for VR,” he said. “The vast majority of our customers know if they want a VR experience, there’s places to go get those. We see the volumes of those on PC and other places.”

He also chocked up Xbox’s decision to skip on VR because the hardware isn’t “selling millions and millions” of units yet. But that might change if games and technology companies make the technology more accessible.

While most VR equipment still has high financial barriers to entry, a 2018 study by Orbis Research predicts the global VR market will be worth almost $50 billion by 2023. Sony sees an opportunity to win over gamers that want to experience VR but don’t want to buy a $1,000 PC to support already costly headsets and controllers.

The PlayStation maker first released PSVR in 2016 and has confirmed all of that hardware will be compatible with the PS5. Multiple patents and leaks have suggested Sony is also cooking up a vastly improved PSVR headset that could be wireless and come with robust specs that rival many PC-only headsets.

How will Xbox Scarlett fight back?

On the other hand, Microsoft will seemingly make cloud gaming the Xbox Scarlett’s special feature. The company is slowly readying its streaming service, xCloud, for an unannounced launch date.

While the company hasn’t revealed details just yet, it’s likely Xbox Scarlett owners could get a deal on the cloud service. It potentially might let Xbox fans play the games they own on their account on their smartphone or tablet when they aren’t at home.

Microsoft Corporate VP Kareem Choudhry also told Stevivor that Scarlett and xCloud are being developed in tandem. That means that xCloud will eventually be updated to run on Scarlett’s superior hardware and that the console will also benefit from the service.

“We designed [Project] Scarlett with the cloud in mind as well, and just as you’re going to see our console product family evolve with that next generation, the cloud is going to evolve along with it,” he said.

Sony and Microsoft have already outlined what the secret sauce will be in each of their consoles, and it’ll be up to gamers to decide which they prefer more: VR or cloud gaming.

The Xbox Scarlett and PS5 are expected to launch in late 2020.