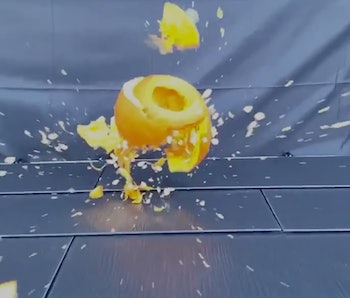 The 13-second clip, shared with Musk’s 29.1 million followers on Friday, shows the company’s solar-harvesting tiles taking a battering from a pumpkin dropped from around three storeys high. The pumpkin appears to bear a carving of Tesla’s logo, but Musk and the team neglected to share a photo of their handiwork before dropping the fruit onto the company’s latest product.

It’s one of the first demonstrations of the product’s durability, ever since its unveiling last week. Tesla first announced a solar roof back in November 2016, as part of a house of the future that included a Tesla Model 3 electric car and a Powerwall battery storing the solar energy. But installations were sporadic, following a smattering of installs in spring 2018. Early reactions were positive, but the roof was notoriously hard to order.

The third-generation of tiles should solve this issue. Tesla has redesigned the internals to offer more energy density. Each tile is larger, and they’re easier to shape down to the correct size. The company is aiming for speedy installs, with new fittings on the edges that should mean Tesla can install a roof within eight hours.

That means we may see more videos like this in the coming months.

Whether the videos will include a Tesla-emblazoned pumpkin is perhaps another question.

Chances are, the roof will be able to withstand other pumpkins in more real-world tests.

Tesla Solar Roof: how the third-generation tiles stack up

Tesla, Musk explained in March 2019, was starved for battery cells in 2018 as it scaled up production for the Model 3 mass market vehicle. Now the company has successfully started producing the cars at speed it’s now free to turn its attention back to energy products, leading Musk to declare 2019 the “year of the solar roof.”

Over the summer, it emerged that the company was taking measures to improve the panels. Building permits showed the company developing a new test structure for its Fremont facility. Musk explained that one of the difficulties with products like these is they’re expected to last for decades, necessitating an intensive six-month testing process. Leaked documents also revealed how newer versions would improve the fit.

Musk and other members of the team outlined the new panels in a conference call last week. They’re bigger, measuring 15 inches by 45 inches. They’re harder to spot, thanks to a redesigned solar cell system. The company will also work with third parties to install the roof, setting up replica factories near the Fremont facility to time their construction. The roof should be more widely available, expected to ship everywhere supported by Tesla’s solar efforts in the United States.

Perhaps crucially, the new roof will cost less. Musk estimated that the roof should cost less than buying a roof and solar panels individually. Independent analysis showed that a house in California could expect to save 40 percent. Musk has also proposed a further $1,000 off for people hit by the California wildfires.

Beyond the pumpkin test, Tesla has been keen to demonstrate the resilience of the solar panels. The company released video footage of the earlier panels under a stress test.

The roof will not be for everyone, and Musk has been keen to tout the benefits of renting retrofit solar panels for people that don’t need a new roof. But for those that do, the product could offer more than just clean energy: a survey from Zillow earlier this year showed that adding solar to a house could increase its value by 4.1 percent on average.