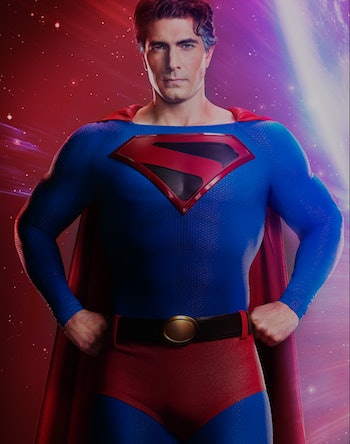 It is fitting that the television crossover started with Superman. In 1957, George Reeves played his Man of Steel from the hit series Adventures of Superman in a Season 6 episode of the sitcom I Love Lucy. In it, no one ever recognizes him as George Reeves, the actor. Everyone, including himself, called him Superman.

Now, over six decades later, there will be a crossover with more dire stakes and consequences than Lucy hanging off a New York apartment. Starting December 8 on The CW and running until January 14, 2020, DC will try to outdo Marvel’s Avengers: Endgame with a five-part crossover event, “Crisis on Infinite Earths” that not only spans several different shows, but several generations of fans. From the 1966 Batman to Xennial touchstone Smallville, “Crisis on Infinite Earths” will celebrate the long history of DC Comics shows and movies for its devoted fans that’s watched most, if not all of it.

But where does one even begin to wrap their head around a crossover as big as this one? And just what the actual frick is “Crisis on Infinite Earths” actually about? Below, we answer the most burning questions even the most casual observer may have about the year’s biggest TV event.

But the family of DC shows, dubbed the “Arrowverse,” was tailored made for the era of the shared universe. And its ambitions will culminate this year in the five-part special “Crisis on Infinite Earths.”

Here are all the most important questions you might have, answered.

Read our latest and greatest “Crisis on Infinite Earths” coverage!

How can I watch the “Crisis on Infinite Earths” crossover?

The episode breakdown and premiere dates are as follows:

After The Flash, the shows begin winter hiatus to accommodate the holiday season. Don’t worry, there’s a little movie called Star Wars: The Rise of Skywalker coming out that will keep you entertained until 2020.

What is “Crisis on Infinite Earths”?

“Crisis on Infinite Earths” is this year’s crossover for the “Arrowverse” — a shared universe of shows based on DC Comics that air on The CW. It all started with Arrow, which premiered in 2012, and later expanded with The Flash (2014), Supergirl (2015), Legends of Tomorrow (2016), and Batwoman (2019). Constantine, another DC TV show that aired for one season on NBC in 2014, was retroactively made part of the continuity, via the episode “Haunted” in Arrow’s fourth season.

The title “Crisis on Infinite Earths” comes from the 1985 DC Comics miniseries of the same name. Written by Marv Wolfman and illustrated by George Pérez, Crisis on Infinite Earths staged the biggest crossover comics had seen, where thousands of superheroes team up with a being called the Monitor to stop reality from being wiped out by the Monitor’s evil twin, the Anti-Monitor.

The story is nothing like Avengers: Endgame, but its sense of scale is similar: A lot of superheroes working together to defeat a single, powerful alien entity. The difference is that instead of Infinity Stones, the DC heroes have to stop the Anti-Monitor from decimating the multiverse, of “infinite Earths.”

Wait, what is the multiverse?

Besides our newsletter, the multiverse is a union of co-existing alternate realities. The concept is purely an idea in theoretical physics but it has influenced a ton of art. Books like Stephen King’s The Dark Tower and Phillip Pullman’s His Dark Materials, shows like Stargate, Stranger Things, Ricky and Morty, and films Spider-Man: Into the Spider-Verse all explore different multiverses.

In the Arrowverse, special technology is required to travel between the different Earths. Every Earth is said to “vibrate” at different frequencies, which means the same people can live totally different lives across different Earths. Certain events in history aren’t always the same.

Earth-1 is the reality in which most of the Arrowverse takes place (Arrow, The Flash, Legends of Tomorrow, Batwoman) and is unofficially the “main” Earth. Supergirl is the one outlier, taking place on Earth-38. (A “real world” reason was that Supergirl first premiered on CBS before transferring to The CW for its second season, where its ties to the other shows became more pronounced.)

In a handful of episodes, fans have had peeks into other Earths, like the retro-futuristic Earth-2 and the apocalyptic Earth-X. “Crisis on Infinite Earths” will see more Earths, many of them never before revealed, all united under threat of annihilation. In the name of fan service, the producers have turned these Earths into where classic DC TV and movies exist.

What are the major plot points to know?

Crisis on Infinite Earths is an unwieldy comic, but to summarize: The Monitor (played by LaMonica Garrett on TV) is an alien wants to stop his evil brother, Anti-Monitor, from destroying the multiverse.

Spoilers for a 34-year-old comic, but not everyone survives. Some of the biggest casualties are Barry Allen/The Flash and Kara Zor-El/Supergirl. Superman holding the body of his deceased cousin (Crisis on Infinite Earths #7) is considered one of the most iconic comic book covers of all time.

For the Arrowverse, “Crisis on Infinite Earths” has been teased since the very beginning of The Flash. In a secret room at S.T.A.R. Labs, Harrison Wells (actually Flash villain Eobard Thawne in disguise) checks in on a newspaper from the future, dated 2024. “FLASH MISSING, VANISHES IN CRISIS,” reads the headline.

The newspaper has loomed over Barry ever since, with his actions in the present changing the future — and some actions ensuring the future will happen as it is foretold. In the Season 5 finale, Barry’s actions in defeating the villain Cicada bring the biggest change yet, altering in the the date printed on the newspaper from 2024 to 2019.

There are two more characters who epitomize Crisis on Infinite Earths and will appear on TV: Lyla Michaels, a.k.a. Harbinger (played by Audrey Marie Anderson), and Pariah (Tom Cavanaugh).

Lyla is an Earth orphan adopted by the Monitor as his assistant. In the TV series Arrow, she was retooled into an agent of A.R.G.U.S. and the wife of John Diggle (David Ramsey), but the crossover will transform her into Harbinger.

Pariah is a scientist from another Earth whose experiments awoke the Anti-Monitor. Pariah is saved by the Monitor, but he is forced to watch Earth after Earth perish as part of his penance. The character will be played by Tom Cavanaugh, who has spent several seasons of The Flash playing different versions of the genius scientist Harrison Wells.

What classic DC movies and shows ARE CONFIRMED for “Crisis on Infinite Earths”?

What DC shows/movies are NOT confirmed?

What should I watch to catch up?

Unfortunately, unless you’re willing to not sleep for weeks, it is impossible to watch all the shows in time. However, there is an efficient, expedited way of catching up: Watching all the previous crossovers!

A total of five specials took place prior to this one. Binge-watching them all is the quickest (if also messiest) way to catch up on the entire Arrowverse before “Crisis on Infinite Earths” starts airing soon:

A two-part episode that pitted the main characters of The Flash and Arrow in the ultimate showdown. Who wins? We all do.

Another two-part special, this one led directly into the launch of Legends of Tomorrow. The episodes, “Legends of Yesterday” and “Legends of Today,” again aired on The Flash and Arrow.

“Invasion!” was the first four series special, adding Supergirl and Legends of Tomorrow to the mix and telling its story across three episodes. A race of aliens called the Dominators come to Earth and seek to control the heroes in order to take the planet.

“Crisis on Earth-X,” the first four-part special for the franchise. During the wedding of Barry Allen and Iris West, an army of Nazis from Earth-X breach Earth-1 in an effort to take over the multiverse. The episode suffered some criticism due to its timing, airing just a few months after the Charlottesville riots.

“Elseworlds,” was a return to the three-part format that excluded Legends of Tomorrow due to logistics. Named after DC’s experimental imprint, “Elseworlds” saw Green Arrow, The Flash, and Supergirl deal with a massive reality distortion that sees (among other things) Flash and Green Arrow switch bodies. The special introduced Ruby Rose as Batwoman, LaMonica Garrett as the Monitor, and John Wesley Shipp reprise his Barry Allen from the 1990 The Flash on CBS. The end of “Elseworlds” officially revealed the 2019 special, “Crisis on Infinite Earths.”

For fun, also check out the two The Flash and Supergirl crossovers: “World’s Finest,” a Supergirl episode where Kara and Barry meet for the first time, and “Duet,” an episode of The Flash that uses the Arrowverse’s bizarre coincidence of Broadway and Glee alums for a musical episode.