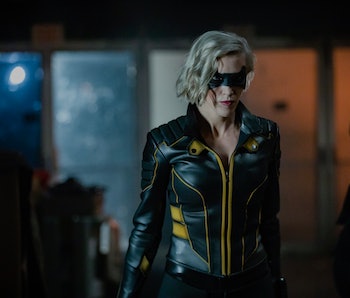 To paraphrase the great and wise Yoda, “Begun, the crisis has.” In the first episode of the final season of Arrow, the highly-anticipated “Crisis on Infinite Earths” crossover special gets an early start as a mysterious, blinding white light engulfs the alternate Earth that Oliver Queen temporarily finds himself visiting.

Who said you had to wait until December?

In the Season 8 premiere of Arrow, the final season of the influential DC TV series that kicked off the “Arrowverse,” Oliver Queen (Stephen Amell) temporarily finds himself on a different Earth — an Earth where he never returned from the prison island of Lian Yu. And now, Oliver is “back” home, on a mission from the Monitor (LaMonica Garrett) to retrieve a very special and rare particle that can help humanity in what the Monitor keeps calling “the coming crisis.”

As the final season of Arrow, the first episode of the season is a prime opportunity for the series to touch back to its roots and offer some twists along the way. While things look the same, right down to the impeccable recreation of the Queen Mansion, it truly is a different Earth.

Tommy Merlyn is still alive (Colin Donnell can’t resist guest appearances), while Malcolm Merlyn (John Barrowman) and Moira Queen (Susanna Thompson) are happily married and not secretly a pair of villainous billionaires. Which means someone else is the Dark Archer. And no, it’s not Thea Queen, who died years ago of a vertigo overdose.

But while the Dark Archer reigns terror, someone else has donned the mantle of “The Hood”: Adrian Chase (Josh Segarra), in a wild inversion of his Prometheus identity from Season 5. And Adrian’s got help in the form of Earth-2 Laurel Lance (Katie Cassidy Rogers) who has hopped Earths again in search of penance. Also for good measure, Oliver’s number one boy Diggle (David Ramsey) tailed him to this Earth, and it’s a good thing he did.

The premiere is basically Season 1 retold and condensed to twelve minutes (the other half of the episode is bizarrely devoted to the 2040 kids who will somehow tie back to the crisis). But it’s at the end of the episode where Arrow truly gets wild. Out of nowhere, a blinding white light engulfs all of reality. It’s not just a Thanos snap, it’s all of existence evaporating into dust.

While Oliver, Diggle, and Laurel hop to another Earth for safety, the rest of this parallel Earth (we never get a proper, numerical designation) vanishes into total, white nothingness.

The “white wall” in Arrow is the show’s first glimpse at antimatter, which destroys and absorbs everything that comes within contact. It’s the number one weapon of the cosmic villain, Anti-Monitor, who grows stronger with every absorption while his counterpart, the Monitor, grows weaker.

This is what “Crisis on Infinite Earths” is all about. All the different Earths in the multiverse are being obliterated into nothing. And if the heroes don’t unite to stop it, all of existence will be permanently wiped out.

The Antimatter wave is seen all throughout the original 1985 comic book miniseries Crisis on Infinite Earths. In that series, written by Marv Wolfman, Anti-Monitor lets loose his antimatter energy across all the Earths, which sends countless trillions into panic and all the heroes into a scramble to stop it before it’s too late. Many, many Earths aren’t so lucky.

Although the Arrowverse is adapting the comics, there’s still a lot of questions to be answered. Is it actually the Anti-Monitor behind the destruction of the multiverse, or is it someone else? Can the lost realities be restored? What’s Oliver’s purpose in the crisis, and why did the Monitor choose him?

With only a handful of episodes left to go until the end of Arrow, we hopefully won’t need to wait long. After all, the crisis is here.

Arrow airs Tuesdays at 9 p.m. Eastern on The CW.