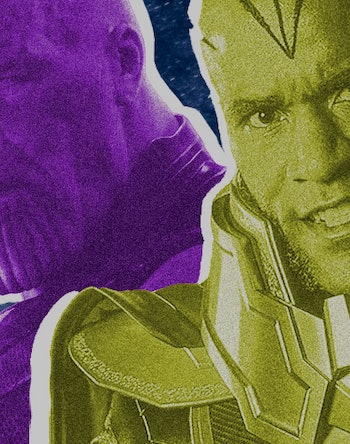 In the same year Marvel Studios ended the theatrical “Infinity Saga” with Avengers: Endgame, DC will strive for that same crossover ambition on The CW with the five-part special, “Crisis on Infinite Earths,” starting December 8. At the center of the crisis is the Monitor, a powerful being who, unlike Thanos, wants to save the universe than wipe half of it away.

But as the all-knowing embodiment of positive matter universes, the Monitor, played by 44-year-old LaMonica Garrett, doesn’t make it easy for the heroes of Arrow, The Flash, Supergirl, Legends of Tomorrow, and Batwoman.

“He’s a cosmic being who feels a responsibility to right what has been wronged,” Garret tells Inverse. “He will do whatever he needs to defeat his brother. It’ll rub audiences the wrong way. But it’ll culminate into something amazing. By the end of ‘Crisis,’ you might have empathy with him.”

Named after the 1985 DC miniseries, “Crisis on Infinite Earths” will see superheroes from the shared universe of DC shows, called the Arrowverse, unite with the Monitor against his evil brother, Anti-Monitor (also played by Garrett), who wants to absorb all the Earths in existence to feed his power.

But while the Monitor looms over different realities, in our universe, Garrett didn’t know he was the Monitor until after his audition. He also didn’t know the crossover would be “Crisis on Infinite Earths” until he saw last year’s special, “Elseworlds.” “I was like, Are you kidding? This is gonna be huge.”

Casual observers may find the Monitor serve a similar role to Thanos in the Marvel films, which Garrett doesn’t dispute. “Whenever the Monitor shows up, there’s reason for it. He’s not in every episode. Just when you’ve forgotten about him, he shows up and the stakes are high.” That, Garrett says, is like Thanos. “Whenever Thanos shows up, he’s not there to do taxes.”

“He’s driving something that’s coming. It reminds our favorite characters the crisis is looming. The Monitor is doing bad things for a better cause. Thanos, in his head, was [for] a good cause even if that means killing half the population.”

Meanwhile, the Anti-Monitor is “just evil.” “He wants annihilation,” Garrett says. “It’s night and day playing the Anti-Monitor. I think that energy is fun to explore, especially from being the Monitor for close to two seasons now.”

One thing that separates the Monitor from Thanos: He doesn’t crack wise like the Mad Titan. “The way he speaks is almost Shakespearean pentameter,” he says. “It’s very clear. Slow, measured, methodical. You have to be clear and say it once. There’s no mincing words. He has a calmness where you hear every word because this could be the difference between you or a billion people.”

A former Slamball player who balled for the L.A. Mob and was one of the league’s top ten scorers in 2009, Garrett is now an actor with a resume of hits like Sons of Anarchy, Designated Survivor, and now, the DC shows. No two days are the same when you’re the Monitor, who hops sets like they’re dimensions. “I’m a moving part of the puzzle,” he says. “My role is series regular for the universe. Whatever I appear on, I appear on the credits with the main cast. But I might not be on that show next week.”

Garrett didn’t know he was the Monitor until after he got the part. “They had it vague in case the audition material got out. When I auditioned, I didn’t know.” The casting directors informed him he was trying out for an “all-powerful Kryptonian.” Garrett lets his nerd side show when he tells Inverse, “I thought I was Val-Zod, Black Superman, the way they had it written.”

When Garrett got the part, he asked to finally know his role. “They said, ‘You’ll be the Monitor.’ Wait a minute, you mean Superjudge? They said, ‘No, Monitor from Crisis. Are you familiar?’ Yeah I’m familiar! That’s a big deal!”

A hardcore comic book fan who grew up in San Francisco reading Marvel and DC (he’s dressed up as Green Lantern on many Halloweens), Garrett says he knew right away the Monitor’s “magnitude.” “He’s obscure, but if you know who he is, you know how big an impact he had over one of the biggest comics in history. You introduce the Monitor, that’s a breadcrumb for a huge loaf.”

Garrett debuted as the Monitor in the 2018 “Elseworlds” crossover. He thought his time in the Arrowverse was done after that, until he saw his future sitting at home. “I thought my job was done. They didn’t tell me the grand plan. I didn’t learn about ‘Crisis’ until ‘Elseworlds.’ When they displayed it on screen, the actor in me was like, Great, I’m still employed. But the fan in me was going, This is insane. This is the biggest thing ever in network television.”

Playing two heavyweight aliens, the Monitor and Anti-Monitor, also means two heavyweight outfits. But as Garrett tells Inverse, it’s harder playing the Monitor than his evil twin. “They’re similar in that I had limited movement from the neck up. But the cape on the Monitor, that’s fifteen pounds pulling your back.” Try wearing that for eleven hours on set.

“The end of the day, your lower back is on fire. But it looks great. The pain is temporary. I told myself I can do this all day.”

As an actor, Garrett didn’t “find” his characters until he put on the costumes. “The final piece is walking in that skin,” he says. “I couldn’t find the Anti-Monitor until I put on the costume and contacts. Walking around, feeling the weight of who he is, each step as important as the last, he’s all powerful. Nothing has to be sudden. His time is all the time in the world.”

For an actor who came of age reading Batman and Green Lantern, Garrett felt he hit the jackpot when all the actors gathered for a photo that leaked on Instagram. You can see Garrett, cowl to cowl beside his fellow actors. “It wasn’t like we had a scene together. They were just there.”

Even the Monitor get starstruck. “As a fan, I’m looking around like, this is one of the biggest TV events ever, and I’m a part of it.”

“Crisis on Infinite Earths” begins airing December 8 on The CW.