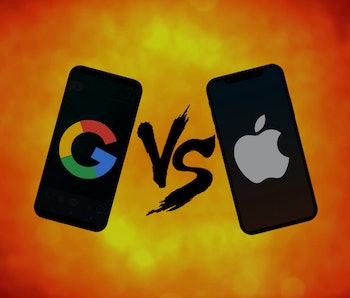 Summer is in full swing and for most that means swimming and tanning but for gadget geeks across the globe, it marks the countdown to smartphone season.

Both Google and Apple are expected to drop their new line of next-generation smartphones in the fall. Fans of the iPhone have been drooling over the rumors that a potential iPhone X Plus might be in the works. Google users, for their part, have caught a few sketchy glimpses at what could be the Pixel 3 XL.

Here’s a look at how the leaks and rumors of both of these future phones stack up against each other and when they could be coming to market.

Pixel 3 XL Display: Will It Have an iPhone X-Style Notch?

There have been at least two big conflicting leaks about how the Pixel 3 XL’s screen might look. The first came from an Android P beta menu, which contained a mockup of a notch-less phone with nothing but a thin bezel around the display.

The second was an image of alleged screen protectors for both the Pixel 3 and Pixel 3 XL that were leaked on the Chinese blogging platform, Weibo. This image predicted that the XL 3 will have a notch.

The notch or no notch debate will likely rage on until Google gives us a concrete answer. But since Android P has native notch support, it would make sense that one of Google’s next releases will include one.

Apple fans have been drooling over the potential drop of an iPhone X Plus. A Macotakara report cited an anonymous “reliable supplier” that revealed the rumored phone would have a 6.5-inch OLED display.

This claim was further supported by an article published by The Bell Tuesday, claiming that Apple has ordered 45 million, 6.5-inch OLED screens from Samsung Display.

This would be a major upgrade to the iPhone X’s 5.8-inch screen and provide an even more eye-popping screen that what the original iPhone brought to market.

Leaks of the Pixel 3 XL’s features have been hard to come by, but the Weibo leak unveiled a potentially game-changing feature. The screen protector had two holes at the top of the phone, which suggests they could be for dual front-facing cameras, front-facing speakers, or space sensors for Face ID like the iPhone X.

Dual cameras have been implemented to the back of many smartphones, but putting them up front could revolutionize your selfie game.

iPhone X Plus Features: Look to iOS 12 For New Tools

There haven’t been many leaks about iPhone X Plus-specific features either. But expect most of its new features to come with the release of iOS 12. The developer’s beta of the software update has been released with improvements to Siri, new augmented reality features, and much more.

Not a word has been muttered about how much Google’s new smartphones might cost. But since the previous Pixel 2 XL was priced at $850 upon release, it’s likely that its successor will come with a similar price tag.

iPhone X Plus Price: It Might Cost As Much As the iPhone X

The iPhone X’s $999 price tag raised eyebrows when it was first announced, so there has been a lot of talk about Apple taking a more budget-friendly approach this year. However, the price of the iPhone X Plus might still be lofty.

The Economic Daily News released a report citing Apple’s Asian Pacific supply chain that said this rumored phone might start at $999. This would mean you would be getting a larger iPhone X for the same price of the original, which could be seen as a slight cut in cost.

Google Pixel 3 XL and iPhone X Plus Release Dates: Look Out For Fall

Both Google and Apple have made it a habit to announce their new phone models in the fall. The Pixel and Pixel 2 were both launched in October and there’s have been no signs that this year will be any different.

Apple, on the other hand, has a September iPhone conference scheduled. Since no hardware was announced during WWDC 2018 it’s highly likely that September will be the moment of truth.

So if you’re currently looking to upgrade your phone, wait a few months, it’ll be worth it.

More like this
Innovation
5.7.2022 12:00 AM
The 5 best iPhone battery cases
By Masha Vapnitchnaia
Gaming
5.6.2022 3:53 PM
'Fortnite' Xbox Cloud Gaming: How to play the battle royale game on iOS
By Joseph Yaden
Gaming
13 hours ago
Look: The 8 most exciting games coming out in 2023
By Joseph Yaden
Related Tags
Share: