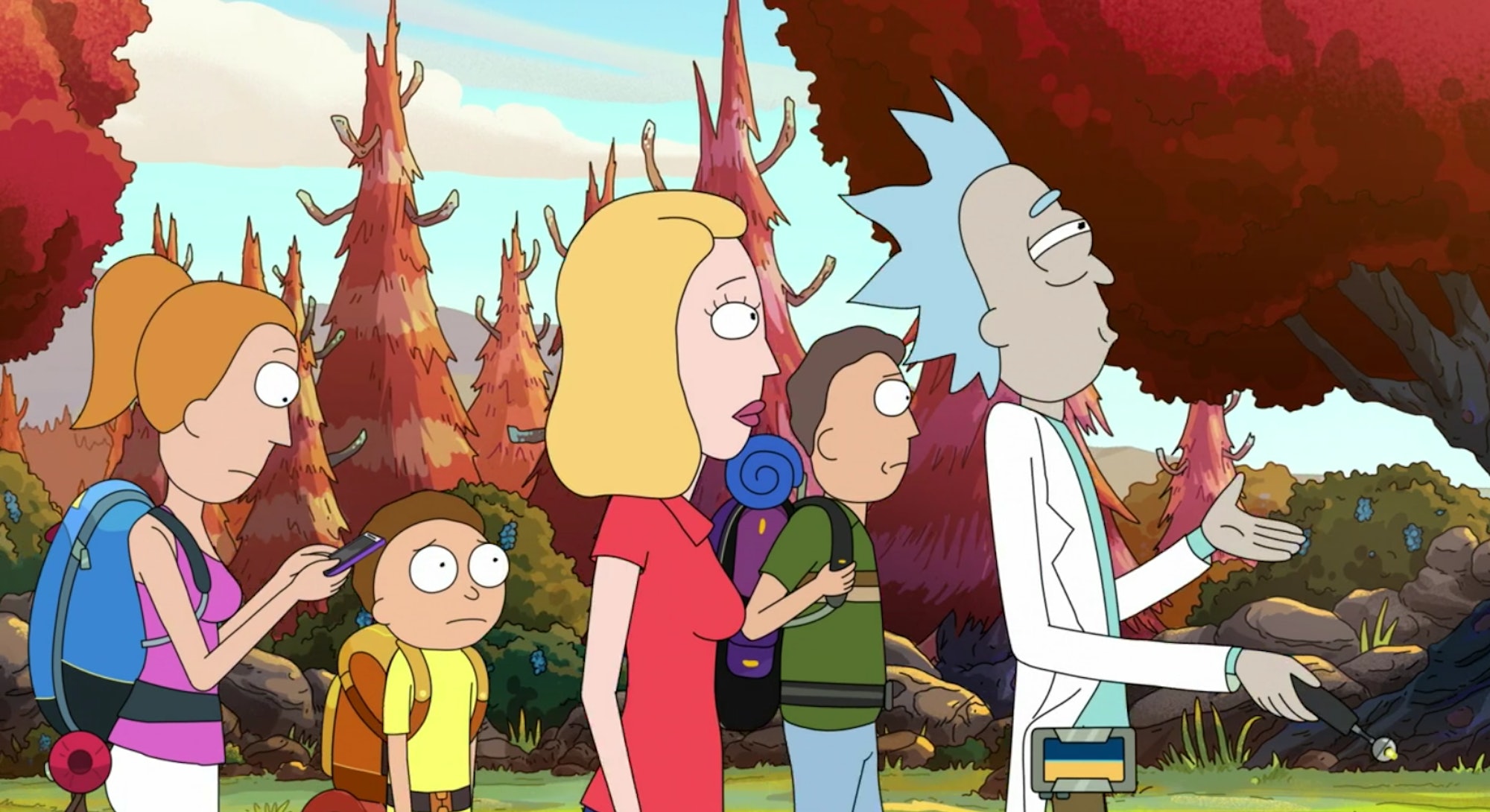 The entire Smith family seldom goes on adventures together in Rick and Morty, but when they do, it tends to be very hit or miss.

In an otherwise stellar season, the penultimate episode of Season 4, “Childrick of Mort,” is one of the show’s all-time weakest. It’s a mostly bleak and mean-spirited story full of conflict with no meaningful resolutions. Some lines of dialogue and violent spectacles are fun, but that’s about it. Den of Geek even called the episode “just whatever,” which feels like the biggest possible insult for a show like Rick and Morty.

In “Childrick of Mort,” Jerry is hellbent on the family experiencing a genuine “no sci-fi bullshit” camping trip. It feels a lot like that time he tried to force everyone to disconnect from their devices to enjoy a more wholesome Christmas together in the Season 1 classic “Anatomy Park.” Predictably, Summer wants to go to a friend’s “Drug Party” where they’re pre-gaming by watching HBO’s Euphoria (a funny, timely reference that will confuse people before the end of 2022). Morty just wants to play video games.

“What you need is to level-up with a bong rip of nature!” - Jerry

Beth doesn’t seem to want anything in particular until Rick gets a message that he may have gotten someone pregnant. She can’t bear witness to Rick abandoning another one of his children, so she forces him into visiting the “baby mama” — who is somehow an entire planet. It's hard to decide whether this is more or less shocking than that time Rick hooked up a hivemind entity. We never learn the nitty-gritty of how Rick made relations with a celestial body beyond an awkward hole at the center of a crater on the planet's surface, but the uncomfortable-looking clay children with spiky hair that “Gaia” births seem like evidence enough to prove that Rick is indeed the father.

What ensues doesn’t feel all that organic for any character. Everyone starts out the episode with a singular dogged goal: Beth wants to save her step-siblings, Jerry wants a camping trip, Morty wants to play games, Summer wants to do some drugs, and Rick wants to just do nothing. Rick’s the only one that pivots towards helping Beth because he feels obligated, but the rest of the Smiths go to ridiculous lengths to preserve their singular inane goal to the point where it’s barely believable.

Every character other than Rick is reduced to a ridiculous caricature version of themselves. Relationships don’t evolve. Nobody learns a lesson. It’s not even that fun.

Beth would rather stand under an erupting volcano of clay people while trying to catch some of them with a small trampoline than admit that her efforts are worth almost nothing in the grand scheme of things. Jerry attacks his family with a magical staff that could very easily kill them rather than admit he just needs attention. And the kids would rather mess around on an alien spaceship huffing brake fluid than spend some time with their father. On a show that often achieves brilliance in its storytelling, every character choice here feels painfully limited and oversimplified.

You’re telling me that Morty, who once defused a neutrino bomb that Rick built, would think that an alien spaceship functioned like a video game controller? Rick and Morty doesn’t get to give Morty an excellent long-form arc that transforms an anxious dork into a competent adventurer and then have him revert just because it feels convenient to the story. It’s a little bit too unbelievable, even for a show about a planet that can get pregnant.

At one point, Summer calls Jerry out for making a s'more and acting like it’s a big deal. “Oh you think this s’more makes you special?” she yells. “What, because someone said ‘good job’ to you once when you were 10?” Jerry cries and goes for a walk. As much as I love seeing him kick a rock that bounces back and hits him, causing him to fall in a river and nearly die, Summer just playing the bratty mean girl here feels like a reduction of her character — just like Morty.

When Jerry brings an appreciation of camping to Rick’s clay children, he’s worshipped as a god among morons. His petty feelings towards Beth and Rick come to a head when he leads his new followers in an all-out assault on the budding metropolis that Rick and Beth create around the birthing hole.

Rick develops a system with Beth through which he can artificially accelerate the cultural growth of the clay people. Athletes are programmed for introversion so they might bully mathematicians, therefore creating astronomers. DJs, foodies, and influencers are reduced to the “Unproductives” label (these are truly Jerry’s people.) It’s a glib and obvious indictment of human society. Rick and Morty often subtly owns its viewers, but it does so in such an entertaining way that we barely notice. In this case, nobody’s having fun: Not me, not you, not a single member of the Smith family.

Jerry’s pettiness is only gratifying to watch when it still makes him look like a fool and the stakes are low, not when it leads to a civil war in which sentient beings die and he almost kills his family. Whenever Jerry gets mean-spirited, it’s not all that fun. Watching Jerry get bruised and broken after falling into the river is good. Watching him tear down a house built by one of the tree people because it doesn’t count as camping, isn’t. It’s just mean.

Late in the episode, when we learn that the real father of this new species is a Zeus-like cloud god that Gaia calls, "Reggie," it feels like an unearned plot twist where the wool is pulled over our eyes.

Jerry is so desperate to feel needed that he leads these clay people in a war against the society started by Rick and Beth. Because he’s been neglected by his family, he's willing to let Reggie imbue him with godlike power that allows him to unleash literal plagues against his wife. None of this really feels right.

Meanwhile, Summer and Morty get so high that they’re scared straight after almost crashing a spaceship they find. “We think we know everything, but maybe we’re the ones who suck?” Morty gasps after nearly dying. This kind of heavy-handed finger-wagging isn’t even done seriously. Rick then praises them for crashing the ship through Reggie's brain accidentally: “Getting high and playing video games is the best!” The point of their arc gets muddled for the kids themselves and for the viewer. Drugs and video games are bad, but they’re also good.

What is Rick and Morty really trying to say? Why is this subplot even here?

If this were a more intimate adventure between Rick and Beth, like “The ABC’s of Beth,” where they can bond one-on-one and process their conflicted feelings about parenthood in this chaotic sci-fi multiverse, that could have worked as a smarter story. Instead, we’re left with a story that isn’t all that fun. And it’s super-mean. So maybe the multiverse really is meaningless?

Rick and Morty Ricktrospective series takes a critical look at every episode of Rick and Morty ever, working backward from the worst to the best. Join us as we search for finite meaning in an inherently meaningless infinite universe.