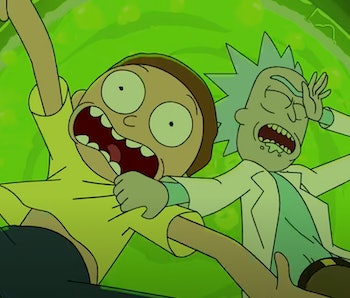 If Rick and Morty Season 4, Episode 6, "Never Ricking Morty" is any indication, then the rest of this season won't actually feature a major conflict against Evil Morty, the return of Phoenix Person, or have a Game of Thrones-inspired story.

We either have absolutely no clues to go on to make predictions about what's coming next, or the answer is staring us in the face. Will fans of the show be happy when this season concludes at the end of May? Either way, Rick and Morty's writers and creators continuously challenge fan expectations at every turn.

Rick and Morty's most hardcore fans have been clamoring for more canon-expanding stories for years. In Season 4 Episode 6, the show gave fans what they wanted, but it came with a devious catch.

Outside of Rick's "unnecessarily badass suit-up" where he and Rick wind up looking like mini-Gundams, and another storyline featuring a facehugger alien species, every single sequence from the March 31 trailer has already been shown on Rick and Morty. In other words, every clip that may have inspired a new fan theory or hinted at the return of characters like Snuffles, Tammy, or Evil Morty seemingly turned out to be a total fakeout. So there's no grand finale planned for Season 4 ... or is there?

Taking a closer look at the finer details of "Never Ricking Morty," however, might indicate the total opposite.

"I'll fuel my anthology with your limitless potential, propelling it to its final stop: Beyond the Fifth Wall!" the Storylord says of his grand plan. (Breaking the fourth wall refers to when characters directly reference the audience, the fifth wall is an even more meta concept that involves characters referencing other work created by the people involved in the thing you're watching.)

The Storylord is tapping into this meta barrier. So everything we see in those clips near the end of the episode are potential stories that the actual writers of the show considered.

"Is any of this canon?" Morty asks. Rick's reply: "It could have been."

That's when Storylord cranks up the "Marketability" and "Broad Appeal" meters on the machine, which explains why what comes next is everything that fans could possibly want: A traditional, epic confrontation full of callbacks, Easter eggs, and characters we want to return. In other words, the kind of bland but predictable finale that made Star Wars: The Rise of Skywalker such a critical letdown. Is that why we see Summer and Tammy fighting with lightsabers? To really hammer that point of comparison home?

Back aboard the Story Train, Rick tells Morty to "resist." Storylord replies, "What's wrong, Rick? Don't you want to see how your story ends!?" That's when we get what everyone's been dying to see, which is some kind of closure regarding Evil Morty teaming up with an evil Mr. Poopy Butthole and an entire army.

Rick knows that he's going to lose, so he prays to his lord and savior Jesus Christ. When the son of God shows up within this potential narrative, he provides the distraction Rick needs to grab Morty and escape back to the Story train, trapping the Storylord within this biblical narrative.

It's unclear whether or not the Morty who bought the Story Train and his Rick actually experience anything that's happened throughout the episode, so we really don't know if they escaped the train or if the show, metaphorically, is still on these tracks.

The cyclical Story Train is a very obvious metaphor for how Rick and Morty recycles story gimmicks and structures, hurtling through the cosmos on a predictable track that leads directly to Evil Morty. Is "Never Ricking Morty" the show breaking free from those tracks? Or is it the show confirming that those tracks still exist?

In the end, the mere possibility is enough to prove Rick and Morty's point.

With Season 4 Episode 6, the show is clobbering us over the head with the philosophical observation that story potential — the kind of stuff that fuels our imagination and creativity, inspiring fan theories and fan fiction — is always going to be more enjoyable and powerful than whatever story we eventually get.

The great irony is that the greater the story potential, the greater our expectations, and therefore, the more likely it is that we'll all be disappointed by the end. The longer this kind of narrative tension goes on, the more likely it's possible. Could Rick and Morty ever possibly fulfill our expectations? No. That's why the show's creators probably won't even try overtly to do so.

Game of Thrones and the Skywalker Saga are two of the greatest genre stories that defined the 2010s, and they both ended in disaster. The conclusion to both drew viewers in the millions, and while many of them enjoyed these stories as pop culture entertainment, any measure of critical analysis proves they were pretty bad in the end.

If Rick and Morty wants to be better, it has to be different. It'll do that by being Rick and Morty, a subversive and deeply strange sci-fi series full of wacky gimmicks that only seldom follows through on its overarching plot threads. The show's creators and writers want us to remain suspended in a permanent state of disbelief — just like that poor Storytrain conductor that got ripped in half.

Once we all learn to accept that fate, Rick and Morty will become that much more fun to watch.