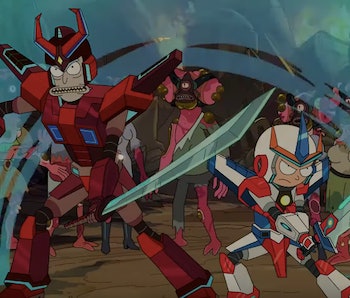 There's no such thing as a good April Fools prank online, with one small exception: Rick and Morty. The third season of the Adult Swim cartoon famously premiered on April 1 without any warning, and now, we're getting our first look at Rick and Morty Season 4 Part 2 on April 1 — plus an official release date for Episode 6.

Rick and Morty Season 4 returns on May 3 for another five episodes, but that's just the beginning. A new trailer reveals the shocking return of multiple series villains, suggesting we could finally get some resolution to the biggest questions in Rick and Morty history.

Much of the Rick and Morty Season 4 Episode 6 trailer focuses on a specific episode where Rick and Morty suit up in Voltron-style armor to fight against what appears to be a bug-like alien that's race possessing another race of humanoid pink aliens. Also, Summer is there and she's somehow in charge of the evil aliens.

But what's more interesting is the return of some very familiar faces we haven't seen for a very long time. Here's a quick rundown of all the most important details.

Back in the Season 1 episode Lawnmower Dog, Rick gave the family dog, Snuffles/Snowball, an intelligence boost to placate the family while he took Morty on an adventure. Ultimately, Snuffles ended up leading a canine revolution that rose up and dominated humanity.

Of course, Rick managed to outsmart Snuffles, and in the end, the super-intelligent dogs set out to find their own world. That was pretty much the last we saw of Snuffles, but it seems Rick and Morty Season 4 Part 2 will take us to his new home and reveal what appears to be a war between superintelligent cats and dogs.

The revenge of Tammy

Rick and Morty Season 2 ended on an epic cliffhanger when it was revealed that Summer's classmate Tammy was actually a secret agent for the Galactic Federation investigating Rick and his rebel associates. She even married Bird Person before revealing herself and the wedding and attempting to kill the entire group of intergalactic lawbreakers, Rick included.

We haven't seen Tammy since, but in the Rick and Morty Season 4 Part 2 trailer we see Summer and Tammy fighting with what's pretty clearly a pair of lightsabers. It's totally epic, and it likely means one other character isn't far behind...

The rise of Bird/Phoenix Person?

Bird Person was shot multiple times at his own wedding in the Season 2 finale, but in a post-credits scene after Season 3 Episode 1, we learned he was resurrected as a cyborg known as Phoenix Person (he's basically Darth Vader with wings). For years, Rick and Morty fans have wondered what would happen next: Will Phoenix Person stay evil and fight against Rick? Will he eventually see the light and turn against Tammy?

The trailer for Rick and Morty Season 4 Part 2 doesn't actually show us Bird/Phoenix Person, but Tammy's presence suggests he'll definitely show up. The only question is: What happens then?

Rick and Morty Season 4 Part 2 premieres May 3 on Adult Swim.