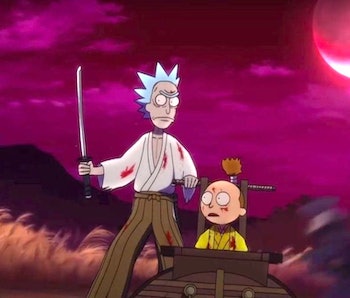 The coronavirus pandemic may have pushed back the release of Rick and Morty’s remaining Season 4 episodes, which were supposed to debut at some point in 2020. With so much uncertainty in the air, it's anyone's guess when the remainder of Season 4 could debut. But there's new reason for hope: Adult Swim recently released a Rick and Morty short that may tease an April Fools' return for Season 4, episode 6.

Update— We were right! (Sort of.) Adult Swim released a new trailer for Rick and Morty Season 4 Part 2 on April 1. Check it out here. (Original article continues below).

In a surprise move, Adult Swim released the five-minute Rick and Morty clip called “Samurai & Shogun.” It reimagines the characters in anime form, with the characters voiced by the actors who do the show’s Japanese dub. The clip follows Rick and Morty as they’re transported to feudal Japan, where Rick faces off with a group of highly-skilled samurai, butchering each and every one of them in bloody fashion to protect his grandson Morty. It's pretty amazing and brutal to watch.

The clip was produced by the Japanese anime studio Studio DEEN, and it’s close to the show's traditional animated style, with a few obvious differences. The anime-styled short left fans wondering when Season 4 will resume. The midseason finale aired back in December 2019, and Season 4 still has five more episodes to go before it wraps its ten-episode run.

Adult Swim is no stranger to releasing surprise Rick and Morty videos or episodes around this time every year. In 2018, Rick and Morty’s “Bushworld Adventures,” an 11-minute video depicting an Australian version of the titular characters, aired unannounced on April 1. The year before that, Season 3’s "The Rickshank Rickdemption" unexpectedly premiered on the same day. At first, fans thought it was a joke.

April Fools' Day releases have become something of a tradition for Rick and Morty, so it’s possible that the clip was meant as a prelude for the second half of Season 4. Of course, the release of “Samurai & Shogun” isn’t necessarily an indication that the rest of Season 4 is set to follow. After all, the anime clip seems wholly separate from the show, following the characters on an adventure that has nothing to do with the rest of the series’ storyline. However, considering that there has been radio silence on when the next batch of episodes will debut, the surprise anime short may be the appetizer ahead of the main course.

Rick and Morty Season 4 is currently streaming on Hulu.