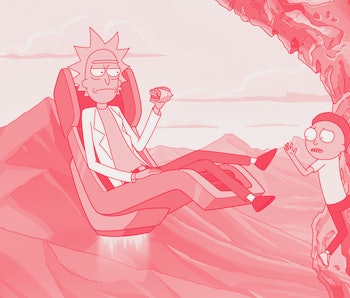 Rick and Morty may not be getting an April Fools’ Day special this year, but fans won’t have to wait much longer to watch and dissect the remaining five episodes of Season 4, which will begin airing on May 3. A wild new trailer revealed that Rick and Morty’s adventures are just getting started and their inter-dimensional travels will be sending them to well-known fantasy setting. Yes, it looks like the Adult Swim series may be giving fans a Game of Thrones crossover episode.

Set to the song “The Boys are Back in Town,” the trailer for the rest of Season 4’s episodes showcases plenty more adventures in store for mad scientist Dr. Rick Sanchez and his not-so-smart grandson, Morty. The pair are no strangers to using portals to travel to an infinite number of realities, dimensions, and a variety of planets.

Earlier in Season 4, Rick and Morty included an episode where the titular characters were dropped into a Dungeons & Dragons crossover, which saw the animated world of the show interact with the playable game world of D&D. Now, it seems Rick and Morty may be dropping in on the world of HBO’s Game of Thrones.

A brief moment from the Season 4 trailer sees Rick fighting a giant wolf. However, upon closer inspection, it looks like Rick is tackling a direwolf, an extinct prehistoric canine that was far larger and stronger than the wolves we know today.

Game of Thrones fans know direwolves were the beloved companions of the Stark children. Jon Snow’s direwolf, Ghost, survived all eight seasons of the show (minus part of an ear), accompanying the character to his new home beyond the Wall in the series finale.

Rick could be fighting a regular wolf in this trailer, but the setting also hints at a Game of Thrones-themed episode. The ground is covered in snow and imposing statues of armored knights guard the outer walls of what looks to be a castle. This suggests that the titular characters are in Winterfell, the northern capital of the Seven Kingdoms and the ancestral home of House Stark. Take a closer look below.

And, if that wasn’t enough evidence, the direwolf’s eyes are a pale blue, a trait primarily associated with that of the Night King and his army of White Walkers. We know that Rick and Morty can go anywhere on the show, so it’s possible that they’re on another planet, one where the world of Game of Thrones actually exists.

It’s also possible that Rick and Morty have simply crossed over into another dimension in another multiversal trip. It would admittedly be fun to watch Rick take on the undead army or even fight one of Daenerys Targaryen’s three dragons. Whether or not Rick and Morty actually visit Westeros, we won’t have to wait long to find out.

Rick and Morty Season 4 will continue on May 3 on Adult Swim.