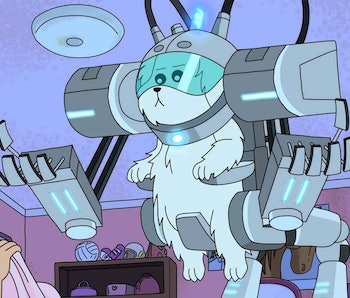 There are only five episodes of Rick and Morty left in Season 4, but we finally know when we're getting them. As an April Fools treat, Adult Swim released a trailer to tide us over until the show's return in May. A single shot from that action-packed teaser has fueled a wild fan theory about a war against natural rivals from different dimensions.

In the second-ever episode of the show, "Lawnmower Dog," Rick gives Jerry a device that vastly increases the intelligence of the the Smiths' dog Snuffles, but naturally this backfires, as Snuffles goes on to invent a translator, a robot gundam suit, and assembles a robot dog army. While he seems dead set on colonizing the Earth for the dogs, he changes his mind and leaves to find his own planet.

Typical early Rick and Morty shenanigans, right? Here's where Reddit comes in: in the new Season 4 trailer, we see Snuffles on what seems to be his planet, fighting a cat. In what appears to be the same location, Summer fights Tammy, her former best friend, now a Galactic Federation agent. How could both these returning characters coexist? Reddit user Rynderend has a theory that is fittingly complicated.

It's most likely the same planet, judging by the comets streaking across the sky and what seems to be a statue of a dog behind Summer. This theory proposes the entire war from the cats and dogs was a set up by Tammy to lure the Smiths — and most importantly, Rick — to fight her.

Rynderend goes into a lot more detail about the respective dimensions: the cat fighting Snuffles could be Morty's pet from another dimension, and therefore followed the same path of Snuffles, robot suit and all. So which dimension is Snuffle's planet located in? Considering how early "Lawnmower Dog" came in the series, the most likely answer is the original Pilot dimension. (Remember, Rick and Morty abandoned that dimension in Rick Potion #9.)

If this is true, it means Tammy has somehow developed the ability to travel between dimensions, as she was previously locked to the replacement dimension. This also explains how she could have spurred the war in the first place: If the cat is in fact Morty's pet from another dimension, Tammy could simply have taken it to the dog planet and let nature take its course. Just as dogs fight against cats, so will Rick and Morty fight against the ordinary.

Rick and Morty returns to Adult Swim May 3.