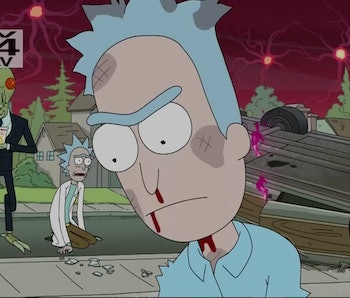 Since Rick and Morty’s beginning back in 2013, its growing fan base has longed to know Rick Sanchez’s origin story. Our yearning to know what happened to his wife and how he created interdimensional travel culminated in the Adult Swim show creators trolling fans with a fakeout story in the Season 3 premiere, but one Redditor may have landed on the best possible explanation in a new theory.

U/snakeravencat posted to the r/FanTheories subreddit Sunday with a theory dubbed “Rick: Creator of Worlds.” They reference an important line from the Season 2 finale “The Wedding Squanchers” where Rick turns himself in to the Galactic Federation to save his family. He’s put into prison, and when asked what crimes he’s in for, says in a sad voice, “Everything.”

“What if this isn’t the offhanded dismissal, but rather a summary?” the theorist writes. “What if he actually feels responsible for EVERYTHING because he started it?”

In other words: Rick may have created the multiverse he spends so much time traversing as a way to bring back his dead wife, but he only became a nihilist and alcoholic once he realizes his efforts were fruitless. In that sense, he’s responsible for pretty much everything that happens in the multiverse

Imagine a scene like the one presented in the Season 3 premiere, “The Rickshank Rickdemption,” where Rick fabricates a fake origin story to dupe the Galactic Federation. They want him to reveal the secret to interdimensional travel, so he creates a fake memory about someone planting a bomb that kills his wife Diane and Beth as a little girl. That enraged Rick then creates his first portal gun, and the Galactic Federation uploads a fake code from the memory that gives the real Rick full access to their computer systems.

On one hand, the scene felt like a cunning troll aimed at fans constantly drumming up theories about Rick’s real origins, but this subversive fakeout also feels like an obvious blueprint for what probably happened in Rick’s actual past.

Rather than interdimensional travel, the first thing most mad scientists in science fiction try to revive a dead loved one is time travel. In theory, Rick may have tried to harness the same technology he’d eventually use for his car’s microverse battery to distort time:

“He starts with modified temporal fields, hoping to change the direction of time on a local scale,” the theory continues. “No such luck, he can only slow or stop time’s flow. So, he wonders: ‘What if I could stack the fields inside each other?’ So, he posits that use of a spatially tesselated void would allow him to place multiple fields in a single place. That’s where it all went wrong/right.”

In Season 2’s “The Ricks Must Be Crazy,” Rick reveals that he created a unique multiverse inside his battery when he “put a spatially tessellated void inside a modified temporal field until a planet developed life.” In theory, if he applied the same technology to his current reality without containing it in any way, the redditor posits that “without any bounding, the effect grows, exaggerates, and shatters reality into an infinite number of possibilities.”

Therein lies the frightening possibility: Rick created the multiverse when he was messing around with time travel as a means to bring his dead wife back, but because Diane Sanchez’s death is what Doctor Who might refer to as a “fixed point in time,” there was no way to undo it. Instead, Rick wound up shattering reality into an infinite number of universes where her death was the one constant.

Among many things — like why Rick shelved all of his “Time Travel Stuff” for so long and how he knows about the time police before the Season 2 premiere — this would explain Rick’s depression and alcoholism. We’re led to believe he thinks existence is meaningless because the universe is infinite, but perhaps he’s so nihilistic because he knows the one true limit of the multiverse.

Rick often talks about how everyone in his family is expendable because there’s an infinite number of alternatives out there. If it’s so easy to replace family members (like he’s said time and again), then why wouldn’t he just find another version of his wife out there in the multiverse?

Mathematically speaking, she has to exist … unless there’s some hard rule establishing that she can’t. Maybe she only exists at a point in time before Rick accidentally created the multiverse? And Rick knows that messing with time too much would attract the attention of the time police, meaning so all he can do is move forward with a flask in his pocket and a lust for dangerous adventures.

We may never know for sure what hurt Rick so badly in his past or what happened to his wife, but this explanation feels like the best we’ve seen yet.

Rick and Morty Season 4 is expected to continue sometime in the first half of 2020.

Here’s the theory in its entirety: