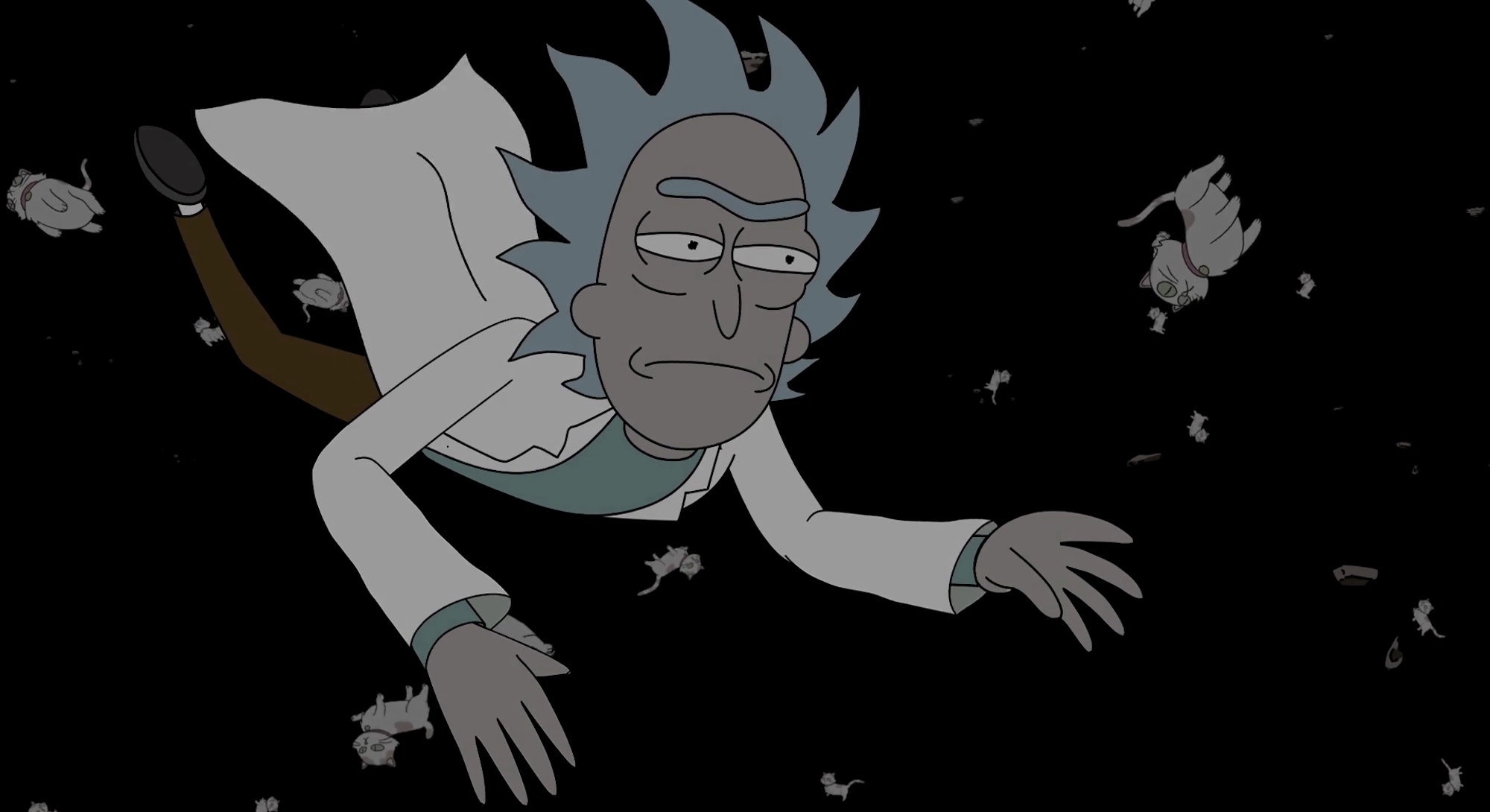 The only thing that could possibly cause perennial atheist Rick Sanchez to question the existence of God on Rick and Morty is for time itself to break, forcing Rick to (temporarily) reckon with his own mortality.

Most Rick and Morty fans will remember the Season 2 opener, “A Rickle in Time,” as the only episode to ever mess with science fiction related to time, but rather than come even close to time travel, the episode uses frozen time as a means to fracture time.

After Rick, Morty, and Summer trashed the family’s home in the Season 1 finale’s crazy house party, Rick froze time so the trio could spend six months repairing the house and bonding. But because they spent so long existing outside of time, their respective timelines were out of sync with reality upon reactivating time resulting in a barely comprehensible mechanic: When any one of them demonstrates uncertainty, time fractures. Rick describes the phenomenon as “a feedback loop of uncertainty that’s split our reality into two equally possible impossibilities!”

So the episode’s best visual joke just has to be Schrödinger’s Cats drifting through the void, right?

Like some of Rick and Morty’s other gimmicky episodes, “A Rickle in Time” relies perhaps too heavily on this core idea. As Morty, Summer, and even Rick demonstrate more uncertainty, time fractures again and again until we eventually reach a staggering 64 panels of slightly different dialogue and action simultaneouslysimultaneously displayed onscreen. It’s an epic production feat considering it probably meant syncing up 64 versions of the same drawn scene with 64 independently recorded audio takes. But the flashy gimmick sacrifices coherency as a result, and the whole bit sort of devolves into utter chaos and cacophony.

Maybe that’s the point? That uncertainty fundamentally yields disorder in a chaotic universe? Even if it’s not, the visuals eat up so much screentime that there isn’t much space in the episode for jokes, even when Shleemypants, a Fourth Dimensional being with “a giant testicle for a head” voiced by the always-hilarious Keegan-Michael Key, shows up, shows up.

The episode’s best joke has to come even before the opening credits, but it still resonates really well with the overarching theme of uncertainty. Rick makes up a totally fake reference on the fly and cracks a joke at Jerry’s expense. Both Summer and Morty, each jockeying to be grandpa’s favorite, pretend to catch the reference and laugh along. Rick then then uses this as a gloriously mean teaching moment and disses them both.

The ironic thing about uncertainty as the throughline of “A Rickle in Time” is that despite chastising his grandchildren for being so wishy-washy that they break time, Rick is the one who presents the most problematic uncertainty. At the very least, his is the most dangerous. In one scene midway through the episode, various Ricks try to kill each other from across the temporal divide. More than once, right when they’re about to fix things, one or more Rick’s will react harshly to a situation, forcing them further and further out of sync.

Perhaps the most dangerous — and definitely most interesting — piece of uncertainty comes from Rick’s wavering faith when confronted with the prospect of death. Rick spent most of Season 1 pretty miserable, and at this point we had only just learned in the Season 1 finale that “wubba lubba dub dub” meant Rick was in “great pain.” After spending lots of quality time with Summer and Morty, Season 1 ended with Rick in a happier place. So it’s interesting that after Rick’s atheism wavers in the face of death only after he’s achieved contentment.

After Rick, Morty, and Summer defeat the Fourth Dimension Being, they try to use time-stabilizing collars to fix their time. But in one of the possibilities, Morty can’t get his collar on and falls off the crumbling garage floor. Rick dives through the abyss to save Morty and does so successfully, but at that point, Morty’s already lost his broken collar. “I’m okay with this,” Rick says, resigning himself to death. “Be good Morty. Be better than me.” Then when he sees the last collar, he changes his tune: “The other collar! I’m not okay with this! I am not okay with this! Oh, sweet Jesus please let me live. Oh, my God I — I’ve gotta fix this thing. Please God in Heaven — please, God, oh Lord, hear my prayers.”

please be merciful to me.”

After Rick inevitably figures out how to fix the collar and saves himself, his triumphant outcry is, “Yes! Fuck you God! Not today, bitch.” Back to the atheistic status quo, right? Maybe not.

Rick and Morty depicted the Devil only a few episodes prior in “Something Ricked This Way Comes.” So Rick totally knows that the Devil exists and yet he still denies the existence of God — even though God must exist in a universe of infinite variation, right? Could Rick’s existential crisis be wrapped up with him knowing they’re all on a TV show, and that “Devil, but no God” is a common TV trope?

Ultimately, “A Rickle in Time” is kind of a middling episode that gets bogged down by its convoluted premise, but it still offers this pivotal moment in Rick’s story.

“At some point I got it in my head we needed to blow minds,” Harmon told the Wall Street Journal in 2015 about their approach to the Season 2 premiere. “It’s a fine episode, but I don’t think the difficulty in writing and producing it translated into customer satisfaction.”

Might we see a deeper exploration of Rick’s faith, or lack thereof, in Season 4 and beyond? We sure hope so.

Related Video: “When Jerry Gets a Story Circle on ‘Rick and Morty’, It Destroys the Universe”