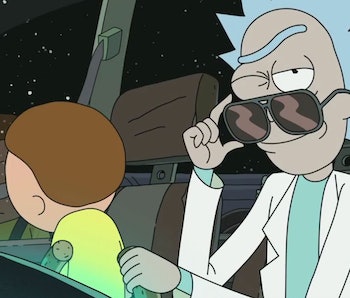 This article about Season 4 of Rick and Morty was originally published on November 26, 2019 and updated on August 8, 2021 following the release of the season on Adult Swim. Read on for the original article, with some new changes to reflect the latest updates on this topic.

The fourth season of Rick and Morty, true to the nature of the sci-fi cartoon, did something unconventional for the series. It divided its typical ten-episode season in half, airing across 2019 and 2020. Here’s everything you need to know about the fourth group of intergalactic outings for the Smith/Sanchez family.

When did Rick and Morty Season 4 air?

Is there a trailer for Rick and Morty Season 4?

The trailer for the first part of the season dropped in October 2019. You can check it out below.

And here’s the trailer for the second half of Season 4, dubbed “the Other Five”:

Did Mr. Meeseeks return for Rick and Morty Season 4?

When asked about recurring tropes or ideas for Season 4 during an interview with Entertainment Weekly published July 17, Dan Harmon confirmed that Mr. Meeseeks would return several times in the new season. They featured prominently in the Season 4 premiere as Death Crystal Morty used Meeseeks Boxes to fight armed military, but also in a fascist reality. Could there be even more?

“There’s going to be a couple of Meeseeks popping up here and there,” Harmon said, a confirmation he echoed later that week during the SDCC 2019 panel. We see several violent Meeseeks in the first official Season 4 trailer with an almost apocalyptic vibe. The second trailer also features an army of Meeseeks standing next to an army of Ricks, so it appears that Evil Morty has created an army of the blue creatures for some nefarious purpose.

The eager-to-please Mr. Meeseeks exists solely to complete a task assigned to it by a master before disappearing in a puff of smoke, and any number of them can exist. They emerge from a Meeseeks Box that functions almost like magic but is never explained. The Season 1 episode “Meeseeks and Destroy” introduced the concept in one of the series’ all-time greatest episodes. The character later returned in a brief cameo during Season 2’s “Mortynight Run.”

Did Rick and Morty Season 4 have an Interdimensional Cable episode?

In the Season 1 episode “Rixty Minutes,” Rick hacked into the family’s cable box so it would get channels from across the multiverse. The anthological episode structure is chaotic, random, and mostly improvisational. “Interdimensional Cable 2: Tempting Fate” in Season 2 also dabbled in this format. This happened in Episode 8 of each season. (Episode 8 of Season 3 instead went to “Morty’s Mind Blowers,” a similar but different episode style.)

Unfortunately, Season 4 did not include a return to Interdimensional Cable. Instead, the format-breaking episode came in the form of “Never Ricking Morty,” an installment that took place on the Story Train, a literal storytelling device for an anthology episode.

Who worked on Rick and Morty Season 4?

Here’s a look at some of the behind-the-scenes people working on Season 4:

Writers: Series creators Dan Harmon and Justin Roiland play significant roles in the Rick and Morty writers’ room, as does producer Mike McMahan. Dan Guterman, Ryan Ridley, Tom Kauffman, and Eric Acosta are all also longtime contributors to the show. Sarah Carbiener should also return as a writer/producer. Jessica Gao, who wrote the Emmy award-winning “Pickle Rick,” left the show to work on a currently untitled series for ABC.

Directors: Juan Meza-León, Dominic Polcino, Anthony Chun, and Bryan Newton are all expected to return in Season 4 as directors. Former storyboard artist Erica Hayes was promoted to director for Season 4 as well, and she's directed two more episodes in the back half.

What’s the plot of Rick and Morty Season 4?

“We have serialized stuff we check in on now, and then that’s sprinkled over the top of strong episodic episodes,” Roiland said in an interview with Entertainment Weekly. “To fans of the show, they’re going to want to watch them in order.”

During San Diego Comic-Con 2019, Harmon and Roiland also confirmed that Season 4 would address time travel in some fashion, namely how Rick’s portal gun allows him to travel forward (or potentially backward) in time. This came to fruition in Episode 5 when Rick used time travel to solve some snake-related problems.

Here’s a closer look at some of our reviews and analysis for some Season 4 episodes:

How many episodes were in Rick and Morty Season 4?

In the July 17 interview with Entertainment Weekly, Justin Roiland confirmed that Season 4 would be 10 episodes long. That was confirmed when the Season 4 trailer called the first five episodes “half the season.”

14 episodes were once the ambition for Season 3, but some kind of creative conflict between Dan Harmon and Justin Roiland caused production delays that eventually compelled them to shorten the season to 10 episodes. Now that Adult Swim has ordered 70 episodes, the series will likely never face extensive production delays again — but the even number probably means that the next seven seasons will each be only 10 episodes long.

Who are the Rick and Morty Season 4 guest stars?

Each season usually offers a handful of recognizable guest stars. Season 3 alone had 12 different guest stars such as Joel McHale, Gillian Jacobs, and Thomas Middleditch, to name a few.

In May 2019, Harmon and Roiland confirmed that Paul Giamatti had a role in a Season 4. This was confirmed again in a July 17 EW interview, but they also added that Sam Neill, Taika Waititi, and Kathleen Turner were in Season 4. During a separate SDCC interview, Roiland also confirmed actor Matthew Broderick for Season 4.

For a look at even more guest stars that have appeared, read this: “Here’s Who Every Confirmed Rick and Morty Season 4 Guest Star Could Play”

Was Rick and Morty renewed for Season 5?

Yes! Season 5 of Rick and Morty was confirmed by Adult Swim all the way back in May 2018, when it announced a renewal of 70 episodes over multiple seasons. The fifth season aired from June 20-August 22, 2021.

Catch up on the first four seasons of Rick and Morty on Hulu.