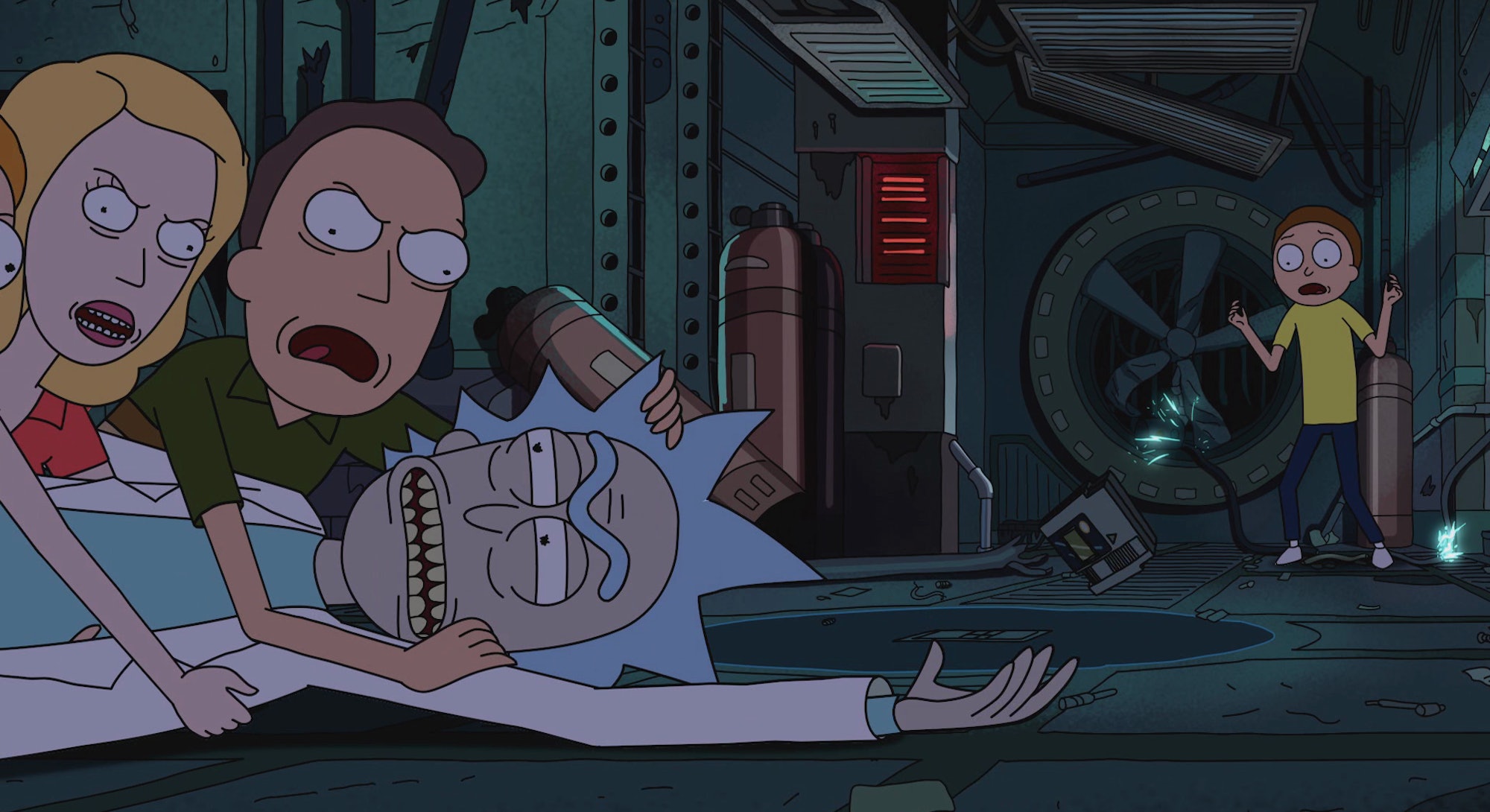 When we talk about Rick and Morty being “meta” or subversive, the most important example is Season 1’s “Meeseeks and Destroy,” one of the all-time greatest episodes that’s ostensibly a story about stories in its deconstruction of the Hero’s Journey and introduction of the Morty Adventure Card. More important, however, the episode introduced us to the bright blue Meeseeks, a creature that remains one of the most recognizable bits from all of Rick and Morty in its maddening desire to accomplish a single task before it is erased from existence.

You probably also forgot that “Meeseeks and Destroy” is where Rick Sanchez established “wubba lubba dub dub” as his new catchphrase.

“Meeseeks and Destroy” might be one of the most important episodes in Rick and Morty history for these reasons alone, but it also happens to be one of the most entertaining and well-constructed episodes in the show’s entire run. To top it all off: Dan Harmon confirmed in July that Mr. Meeseeks will appear several times n Season 4, and sure enough, they’re prominently featured in the Season 4 trailer. So is “Meeseeks and Destroy” the most essential episode to rewatch before Season 4? Probably.

As the episode opens, Morty and Rick are chased by demonic versions of Beth, Summer, and Jerry aboard an alien spaceship, forcing Morty to use a device that melts their bodies while Rick fends off the “clones from an alternate reality possessed by demonic alien spirits from another dimension’s future.” Similar to “Rest and Ricklaxation” two seasons later, this fraught adventure in the opening nearly drives Morty mad, and the situation demands that something change.

“Come on, Morty! D-D-Don’t be like that! The universe is a crazy and chaotic place!”

“Adventures are supposed to be simple and fun!” Morty yells at Rick as he tries quitting their adventures altogether. Is the universe “crazy and chaotic” or is Rick the one that makes it so? “Meeseeks and Destroy” grapples with this very question. A bet evolves: Morty gets to be in charge of a single adventure, and if it doesn’t suck, he gets to pick every tenth adventure moving forward.

Our A-Plot takes the duo on a heroic journey that feels inspired by old fables or Dungeons & Dragons, but like in “Lawnmower Dog” or “Rixty Minutes,”, Rick first has to present a scientific invention to the rest of the family as a necessary distraction. Enter the Meeseeks Box.

With the simple press of a button on the Meeseeks Box, a neon blue humanoid creature with a hilariously shrill voice erupts into existence with the sole purpose of accomplishing a task assigned to it by the person who summoned it.

Rick demonstrates this by having a Meeseeks open a jar of mayonnaise, urging everyone to keep their requests simple, but when they ignore his sage advice, this B-Plot leads to disaster.

The real culprit here is Jerry, who once again is presented as a chuckle-worthy moron you love to hate. Despite deliberating on his request the longest, he comes up with a task so frustrating that Mister Meeseeks keeps summoning copies of himself to help. Things only get worse.

Summer wants to be more popular at school, Beth wants to be a more complete woman, and Jerry wants to take two strokes off his golf game. Despite the abstract nature of their requests, Summer and Beth’s tasks are accomplished with relative ease. Summer’s Meeseeks makes a speech at school leading to the conclusion that “friendship with Summer Smith is the most valuable and enriching experience of your young lives.”

The best scene in the entire episode, however, goes to a brief scene at a swanky French restaurant where Beth sits on a patio sharing a bottle of wine with her Mr. Meeseeks. He listens intently to her talk about lack of fulfillment in a failing marriage, of losing “that wide-eyed girl from Muskegon,” and her eventual realization that she should leave Jerry. Rick and Morty has always been adept at exploring deeper human truths about existence and human psychology while presenting it within the framework of a weird sci-fi premise. The way “Pickle Rick” explores mental health comes to mind, but this much earlier episode is just as potent.

This scene is also way funnier in terms of sheer ridiculousness when it first gives us “friends having a heart-to-heart” vibe before it goes full-on romantic as Beth tries to kiss the Meeseeks at his moment of death.

“Beth, having a family doesn’t mean that you stop being an individual. You know the best thing you can do for people that depend on you? Be honest with them, even if it means setting them free.”

Jerry has neither the patience nor acumen to improve his golf game with predictable advice from his Mr. Meeseeks. (“Remember to square your shoulders, Jerry!”) The blue fella’s shrill voice only stresses Jerry out even more.

Like in Michael Keaton’s 1996 film Multiplicity, the Mr. Meeseeks creates more and more of himself to try accomplishing this impossible task. Each is forced to live for hours on end, “an eternity in Meeseeks times.” After an entertaining brawl, they corner Jerry in a restaurant when he’s on a date with Beth, and right when she’s about to dump him, the stress of the Meeseeks’ interruption pushes them back together.

This B-Plot, while comparatively simple and straightforward, is some of the most fun Rick and Morty has with a wacky sci-fi concept. The A-Plot, on the other hand, is some of the most meta storytelling the show has ever explored in what’s a deconstruction of story structure and an exploration of why stories do or don’t work.

Also Read: “Rick and Morty Story Circle: The Mr. Meeseeks Episode Is a Story About Stories”

Morty and Rick go to “a fantasy-type world with creatures and all sorts of fantasy things” for what Morty calls a “quest.” Posing as heroes, they venture up a beanstalk to steal treasure from a giant they can give to the commoners. This derivative adventure goes off the rails when the giant dies in an accident. They’re blamed for it and are about to go to giant prison for little people when a legal loophole exonerates them. Left to traipse down an impossibly large staircase, it’s in a tavern for tiny beings called the Thirsty Step that disaster strikes.

As a viewer, we want Morty to win this bet and for Rick to lose. He’s the underdog, often mistreated by his grandfather in rude ways, and we admire his idealism. But we also agree with Rick’s more realistic assessment of the inherent chaos in the universe. It makes for a fun Rick and Morty story for Morty’s do-gooder attitude to end in disaster and for Rick to say “I told you so.” (See “Mortynight Run” when Morty realizes he has to kill Fart.)

Perhaps the most difficult-to-watch Rick and Morty scene ever happens in the bathroom here when Morty is almost sexually assaulted by Mr. Jellybean. Morty fends off the assailant, but the experience takes a traumatic toll on the poor kid. For all his cruelty, Rick infers what happened and gently coaxes Morty’s adventure to its finish line, even letting Morty win the bet. He later kills Mr. Jellybean outright in revenge, culminating in a satisfying story that confirms that even though Rick constantly calls Morty a little piece of shit, he still loves his grandson enough to care about his feelings.

What could be more Rick and Morty than a story that negs Jerry, implies Rick’s love for Morty, and also delivers on hilariously weird sci-fi concepts?

It’s in the episode’s final moments that Rick finally says “wubba lubba dub dub.” As the tall tale goes, Rick and Morty writer Ryan Ridley wrote in the script that Rick spins on the floor like Curly from The Three Stooges and makes his weird, recognizable noise. While performing the lines from the script, series co-creator and voice actor Justin Roiland improvised the line as we hear it. So when you talk about Rick and Morty’s comedy being off-the-rails improvised comedic genius, Roiland transforming this moment into a cultural touchstone is a prime example, and enhanced with Dan Harmon’s firm grasp on storytelling structure, “Meeseeks and Destroy” becomes one of the greatest episodes in the show’s history.

Watch “Meeseeks and Destroy” on Hulu.