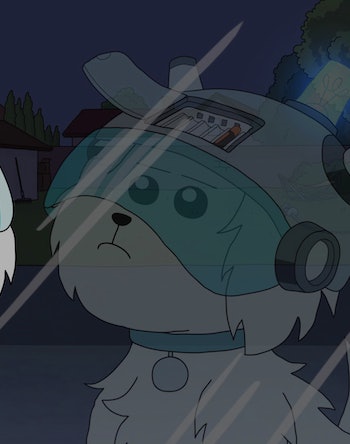 The uneven Rick and Morty pilot episode is one of the series’ weakest. But where the Season 1 debut stumbles, Episode 2 is a triumph, exploring the (many) reasons why dogs are better than humans — and reminding us that sometimes even our nightmares have feelings.

“Lawnmower Dog” originally aired December 9, 2013. From start to finish, it is pure chaos with a touch of nightmare fuel — and I mean that as a compliment — fusing together various pop culture references while satirizing various sci-fi and horror stories with reckless abandon. It introduced us to Snuffles the dog, a delightful character adored by the show’s co-creator Justin Roiland, who owns similar-looking dogs in real life. Roiland also said before the end of Season 3 that of all the characters he’d want to bring back in future seasons, Snuffles was at the top of that list. (Could we see more Snuffles in Rick and Morty Season 4?)

When reviewing “Rick Potion #9,” I discussed how that episode has equally strong A- and B-plots that are closely related, informing one another in a meticulously crafted script where a love potion mutates the flu virus and destroys the world, but the fires of this apocalypse rekindle Beth and Jerry’s marriage. “Lawnmower Dog” is not one of those balanced Rick and Morty episodes. Instead, it’s kind of an anomaly.

While a brilliant standalone episode in its own right, the A-Plot of the family dog gaining sentience and starting a robo-dog revolution on Earth is so far removed from the B-Plot of Rick helping Morty incept his math teacher for better grades, descending into literal nightmares along the way. This episode also introduces us to Scary Terry, the “sort of legally safe knock-off of an ‘80s horror character with miniature swords for fingers instead of knives.” He’s Freddy Krueger with a heart of gold, and he just so happens to say “bitch” in every sentence.

“Lawnmower Dog” could’ve been a total mess, lampooning Inception, Planet of the Apes, The Lawnmower Man, Eyes Wide Shut, Nightmare on Elm Street, and probably other movies I’m forgetting, but by leaning into the chaos and insanity, Rick and Morty shows its true colors as a show that thrives by celebrating the weird collision of pop culture references and satirical sci-fi.

As the episode begins, Jerry watches bland television and whines about Snuffles’ lack of intelligence after the adorable pooch pees on the carpet. (Jerry: “Rick, you wouldn’t by any chance have some sort of crazy science thing you could whip up that might help make this dog a little smarter, would you?”) Rick cobbles together a helmet to increase the dog’s intelligence, inventing a way to distract the rest of the family so he can take Morty on an adventure. (Rick and Morty takes this approach to stories almost too often: see “Rixty Minutes” and “Meeseeks and Destroy,” for instance.)

Rick takes Morty inside the dreams of Mr. Goldenfold, a math teacher at Morty’s school, so they can compel him to give Morty better grades via inception, therefore removing another obstacle that could prevent future adventures. Yes, it’s an obvious parody of Christopher Nolan’s Inception. The idea is that you have to subversively plant an idea in somebody’s subconscious via dreams so they think they made it up in the real world.

We learn later in Season 1, specifically “Close Rick-Counters of the Rick Kind,” that Morty’s “dumb brain waves” cancel out Rick’s genius waves, so when they’re together, Rick’s enemies can’t trace him. We always want to imagine that Rick just loves his grandson and wants to put in the quality time, but Rick and Morty added this clarification to troll our good-natured expectations. Rick has selfish reasons for this particular adventure.

This early in the series, however, we couldn’t be further from that silly piece of world-building. “Lawnmower Dog” is a lighthearted, enjoyable adventure, even if it crosses into borderline offensive territory — like when Morty and Rick pose as Islamic terrorists hijacking a plane in a dream reality. Morty wearing a turban feels problematic in 2019, and the whole thing feels a bit dated.

Later, when Snuffles tries to talk, Summer thinks he’s saying “I love Obama.” It’s bittersweet remembering a time when Barack Obama was still president, but just another example of how infusing a show like this with timely references only serves to make it feel dated on future viewings.

Taken out of context, so many tiny sections of this episode are absolutely bonkers, like when “Goldenfold has some predilections so shameful he buries them in the dreams of the people in his dreams.” This manifests as Summer wearing a kinky outfit trying to seduce Rick and Morty. (Yes, this is one of several episodes that make an incest jokes, but this one’s kind of funny.) When Morty and Rick freak out about a sexualized Summer, a centaur runs up to chastise them: “Sexual hang-ups in the pleasure chamber are punishable by death! Off with their heads!”

It’s also wild to think that Inception is now almost 10 years old, so for some younger audiences, a lot of the inside jokes about the story being incomprehensible, or about dream time dilation, pretty much require that you see Christopher Nolan’s movie first.

By combining Inception with Freddy Krueger tropes in clever ways, the first half of “Lawnmower Dog” is delightfully subversive. Scary Terry becomes one of the most endearing one-off characters in the history of the show despite having knife hands and a face that looks like seared ground sausage. He has relatable dreams about being late to class and forgetting his pants, so we love him for it. With his help, Morty and Rick are able to complete their mission.

Scary Terry: Aww, bitch. I don’t know what to say.

Morty: Hey, yo, Scary T., don’t even trip about your pants dawg. Here’s a pair on us, fool.

The back half of this episode about Snuffles is just plain good storytelling.

Dan Harmon uses a modified version of Joseph Campbell’s concept of the hero journey, dubbed “The Story Circle,” to develop stories for Rick and Morty. Through this lens, characters enter unfamiliar circumstances and are forced to overcome obstacles before returning to their comfort zones having changed. Rick is often never in a situation where he’s not in control, which is to say that he’s seldom challenged. Yet in “Lawnmower Dog,” he’s surprised when Mr. Goldenfold’s dreams turn deadly.

His panic and ingenuity in the face of challenges is fun to watch, and his strategy of delving deeper and deeper into the dreams of random characters is just bonkers.

Snuffles is, on some level, the main character of this particular episode, making “Lawnmower Dog” somewhat unique in Rick and Morty canon. By putting the focus on this dog and his growing intelligence, we get a snapshot into the inner life of dogs — or at least how Dan Harmon and Justin Roiland perceive them.

Snuffles takes over the world with his army of smart dogs in mecha suits, but Rick is able to incept him, manipulating his love for Morty to let humanity live. While within a dream, Rick forces Morty to get sick, prompting Snuffles to exhaust his financial resources trying to save Morty. (An interesting parallel to what so many pet owners do for their beloved friends.) Why should he bother helping a human, the species that subjugating the dog race for so long? “We are not them,” Snuffles says. Because dogs are better than people — or at least they are in the idealized vision we have for them.

That’s why Snuffles takes all of the dogs into a different reality for smart dogs, never to be seen again. Here’s to hoping he makes a surprise return in Season 4 or beyond.