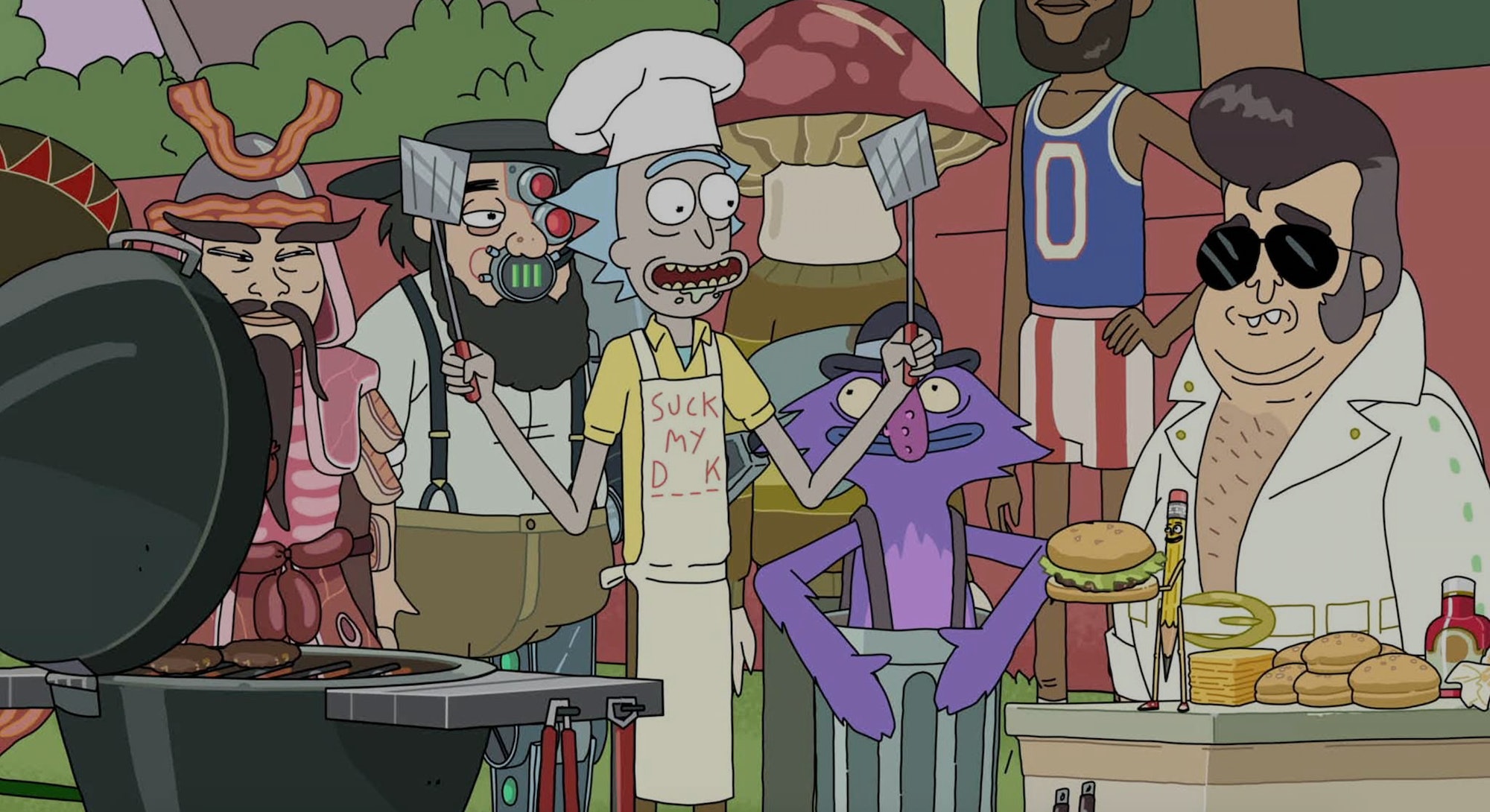 Unsurprisingly, Rick and Morty Season 3 had some of the highest-profile guest stars in the show’s storied history. Makes sense, given how much buzz the series had coming out of its sophomore season. While Morty and Rick travel across the universe and into alternate dimensions, they meet all sorts of different alien beings from across the multiverse, some of them weirder than others.

Season 3 saw them team up with intergalactic superheroes, visit a Mad Max-styled wasteland looking for treasure, and Rick even revisited a pocket reality he created to entertain Beth when she was still a little girl. It’s tough to gauge who the “best” celebrity guest stars are for the show especially when there have been so many, but here are consider the

9 greatest Rick and Morty guest stars of all time:

Thomas Middleditch is easily recognizable as the star of HBO’s Silicon Valley or that seemingly endless chain of Verizon commercials, but his stammering, nasal voice is instantly recognizable in Rick and Morty Season 3’s “The ABC’s of Beth” as the grown-up Tommy Lipkip. He was Beth’s childhood friend that she left to die in Froopyland, having been jealous of him having a loving father. Over the course of almost 30 years, he engaged in cannibalistic incest with the creatures of Froopyland. Yeah, it’s pretty messed up.

In this grotesquely perverted Candy Land that Rick created for Beth, Tommy went totally insane, and he survived by copulating with the creatures of the land and eating their offspring. Due to decades of incest, the many creatures have mutated into monstrous beasts on par with the Cronenbergs of yore.

Jemaine Clement’s velvety voice is most often heard as one-half of the comedic musical duo Flight of the Conchords with Bret McKenzie, but he’s also voiced roles in recent years on films like Moana and The Lego Batman Movie. He also has a recurring role on FX’s Legion X-Men series as Oliver Bird.

Clement voices a sentient collection of gas that assumes the name “Fart” after Rick insults in. This telepathic gaseous being appeared in the episode “Mortnight Run” and is actually quite powerful. Morty befriends Fart after he learns that Rick sold an antimatter gun to an assassin that was hired to kill Fart, going so far as to kill the assassin.

The crown jewel of Clement’s work on the show is a trippy musical number that Fart shares with Morty. Clement’s deadpan delivery of cosmic wisdom and that impromptu music number make this creature hugely memorable.

Ultimately, Fart reveals his intention to wipe out all carbon-based life so Morty has to kill him. Out of all the episodes, “Mortynight Run” is perhaps the single most important in terms of finally getting Morty to understand the nihilistic nature of the multiverse.

King of nerd genre media Nathan Fillion is perhaps most recognizable as the stare of cult favorite Firefly or his more recent crime drama Castle, but he’s also served as the voice of wisecracking robot Cayde-6 in the Destiny video game series for four years. He’s also been voicing Hal Jordan, aka Green Lantern, in many of the DC animated films, including the upcoming Death of Superman. (For what it’s worth, he also recently starred as Nathan Drake in an Uncharted fan film.)

In the Rick and Morty Season 3 premiere, “The Rickshank Redemption,” Nathan Fillion lends his voice to Cornvelious Daniel, the Gromflomite Galactic Federation Agent that invades Rick’s mind to get the formula for interdimensional travel via a brain-link. He’s a no-nonsense smooth talker that also reveals to the viewer exactly how Gromflomites experience arousal. (Spoiler: Their “flappy doodles twitch,” as seen in the above image.) Daniel is also fortunate enough to sample the Mulan Szechuan Sauce within Rick’s memories, and he totally loves the stuff.

Comedian Joel McHale is best recognized as the star of Community, the live-action TV show about adults attending community college that first established Rick and Morty co-creator as a comedy showrunner worth paying attention to.

McHale voices a macho-looking raider named Hemorrhage in a post-apocalyptic desert world that Rick goes to with both his grandchildren in Rick and Morty Season 3. While there, they encounter Hemorrhage, who leads the Deathstalkers. The episode begins as a Mad Max* parody but through artful writing transforms into a pointed indictment of toxic masculinity. Summer comes to appreciate the softer side of Hemorrhage and the two have a serious adult relationship, but Hemorrhage’s important arc serves a much greater purpose of demonstrating more depth to Summer’s character than we’d ever really gotten before. She emerges as a main character on the show, and Hemorrhage catalyzes that development.

Along the way, it helps that Hemorrhage is a woefully insecure macho man who speaks in bizarre, simplified phrases like “boomy holes,” “beforefore times,” and “raidy-rays.”

Andy Daly is perhaps one of the lesser-known guest stars to grace Rick and Morty, but his role as Krombopulos Michael remains one of the most charming and memorable in the show’s history. He’s a cheery, happy-go-lucky assassin that Rick sells weapons to on the side to earn a little bit of extra cash.

Daly brings an undeniable charm to this fan-favorite character, an ever-pleasant Gromflomite assassin that Morty accidentally kills in “Mortynight Run.” He’s oppressively positive and jolly despite killing people for a living, and he delights in delivering death, despite age or gender. He “just loves killin’!

There’s even a side comic from Oni Press that explores Krobopulos Michael’s background, which also clarifies that he left behind a widow that may or may not seek vengeance.

German filmmaker Werner Herzog is best known for his work in very serious filmmaking, in documentary and fiction feature. Despite a stern-seeming disposition, he also dabbles in some comedic cameos in series like Parks and Recreation and, yes, Rick and Morty.

In the Season 2 episode “Interdimensional Cable 2: Tempting Fate,” Herzog voices alien civil rights leader Shrimply Pibbles, who’s basically intergalactic space Gandhi. The comic irony of such a revered leader having such a silly name and being voiced by one of the most serious men in cinema is sublime.

The heart of the revered leader is failing, and doctors in a hospital discover that if Jerry Smith donates his penis, they can convert it into a functioning heart for the leader. Aside from Jerry and Beth’s problematic, but funny, reactions to the predicament, a standout moment from the episode is Shrimply Pibbles’s monologue about human society: “Their entire culture is built around their penises.” There’s nothing like hearing low-brow humor being delivered by the same voice that narrated Grizzly Man.

Keith David as the President of the United States

When Earth was beset by Cromulons in “Get Schwifty” — Season 2, Episode 5 — the President of the United States (as voiced by Keith David) sought the help of Rick to come up with a song that would satisfy the giant, weird heads. It helps that the always-excellent Keith David has such a deep, powerful voice, but the POTUS becomes a reliable source of comedy whenever he appears.

Keith David’s POTUS is one of the few actors and characters to return for a guest appearance in the Season 3 finale “The Rickchurian Mortydate.” In an otherwise middling episode for Rick and Morty, POTUS remains pretty funny even when the character inexplicably becomes a villain when he gets hostile towards Rick and Morty. Still, watching POTUS shrink and embiggen using primitive technology (compared to Rick’s anyway) is a delight, along with his epic final fight against Rick at the White House.

Danny Trejo has long been prototypical badass anti-hero and/or villain that everybody should be afraid of, especially in the Machete film series he stars in. Even on The Flash, he thrives while typecast as this type of character. His role on Rick and Morty was no different as the freakishly agile, grizzled Jaguar.

We don’t get much in the way of concrete details, but after Rick bursts out of the sewer in “Pickle Rick” — as a pickle, mind you — he emerges in some kind of generic paramilitary compound run by villainous Russians. Once Rick builds a laser capable of melting faces with a AA battery, they release Jaguar from captivity to combat the threat. But the two of them team up to take the entire compound down.

Nothing from the episode is more thrilling than when the two square off, satirizing every macho action movie trope imaginable all to produce some excellent comedy.

The Oscar-winning Susan Sarandon voices a crucial character in the Emmy-nominated Rick and Morty episode “Pickle Rick,” which is invaluable for its brutally honest analysis of therapy and its importance for maintaining mental health.

Sarandon’s character, Dr. Wong, specializes in treating coprophagia (obsession with poop-eating) but also does more traditional family therapy. Rick turns himself into a pickle to avoid going to a therapy session with Beth, Morty, and Summer conducted by Dr. Wong. But because Beth takes the syringe he needs to transform back into his human form, Rick has to go to therapy anyway and work through some things.

Sarandon doesn’t get all that many lines in the episode, but her exchange with Pickle Rick makes for one of the most potent — and important — bits of dialogue in all of Season 3, perhaps even the entire run of the show. Sarandon delivers the lines with effortless confidence and a feeling of ease that feels almost to stereotypical of therapists while also being utterly perfect, especially when her cutting analysis of Rick’s ego is so intellectually acute despite her barely knowing him.