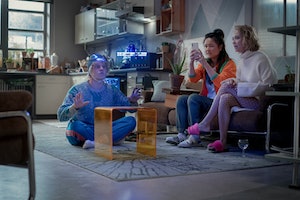 Independence Day might not be on Netflix this Fourth of July, but there’s plenty else on there to sate your appetite for science fiction this summer. (If you do want to see Will Smith and Jeff Goldblum blow up some aliens, you can do so on HBO Max!)

Since June ended, there’s been a major shuffle of TV shows and movies coming and going from Netflix. Though they’re barely science fiction in the traditional sense, all three Austin Powers movies landed on Netflix, so keep that in mind if you’re looking to Netflix and shag. There’s also Air Force One, in which Harrison Ford plays a president who must defend his beloved airplane from bad guys. And if you’re into vampires and tight leather, the Underworld movies are also back!

But if you’re hankering for a taste of tomorrow, consider these 11 science fiction shows and movies. We always pay special attention to what’s new, original, or leaving Netflix soon. For what might be the first time ever, every item on this list was either just added to Netflix or it’s leaving at the end of the month. So let’s get busy!

(PSA: We thought you should know that Jupiter Ascending is leaving on July 31, but that movie’s hot garbage, right?)

“I’ll be back,” Arnold Schwarzenegger said in his typical monotone delivery as the T-800 at the end of Terminator 2: Judgment Day. Sure enough, T2 is finally back on Netflix.

One of the greatest action movies of all time starring the best action film star of all time (go ahead and fight me on that!), this Terminator sequel is also one of the greatest movie sequels ever made. Period. 11 years after the events of The Terminator, John Connor (the future leader of the human resistance) is just a young, very annoying boy. A reprogrammed cyborg beefcake is sent back in time to protect him in the present from the T-1000, a Terminator made of liquid shapeshifting metal.

An already great franchise evolves in T2 while improving the stakes and quality of the grand action sequences. Everything from the writing to the special effects is impeccable (for its time), but the real quality shines in the strength of the performances and the character depth — even for Arnie’s deadpan robot.

A faithful adaptation of the novel, Mobile Suit Gundam Hathaway boasts gorgeous animation in a far-flung future with eerie similarities to our own. Sure, we don’t have much in the way of mecha (...yet), but we do have plenty of income inequality. The corrupt Federation has made it so the wealthy luxuriate on Earth while those living in poverty are shipped to off-world colonies. A terrorist organization called “Mafty” aims to disrupt the status quo. Amid it all is Hathaway Noa, son of a famed Federation captain who winds up piloting a cutting-edge new Gundam mecha.

How will his actions impact the fate of human civilization?

While a bit deep into the Gundam series and mythos to the extent that newcomers may be totally confused, Hathaway is a stunning and excellent entry that’s worth seeing if you like seeing big robots fight. And it’s already getting some rave reviews.

Mobile Suit Gundam Hathway rocketed into our atmosphere on July 1, 2021.

I don’t want to mislead you, but Netflix’s official documentation says that something called “Star Trek” is being added to the platform on July 1. Since the original series is already there and there’s nothing else called simply “Star Trek” across movies and TV, it should be safe to assume that it’s the excellent 2009 movie from J.J. Abrams. Could it be Star Trek: The Motion Picture mislabeled? Possibly! But we hope not.

Back when Abrams was still really good at making movies, Star Trek breathed fresh air into the aging franchise — and brought it into the mainstream — long before CBS began producing Discovery and Picard. A reboot featuring characters from the original series that ostensibly also functions as a sequel of sorts, Star Trek is a lot of fun for Trekkies and newcomers alike thanks to the excellent action, humor, visuals, and one of the most immediately gripping film openings of all time.

Star Trek warped back into the Netflix galaxy on July 1, 2021.

I don’t remember when it happened, but the sci-fi Jumanji knockoff called Zathura: A Space Adventure was removed from Netflix sometime after its arrival in February. Now, it’s back! After directing Elf (2003) but before Iron Man (2008), Jon Favreau did this bizarre little project.

Zathura is a hilarious and ridiculous romp with a premise just like Jumanji: A couple of kids find a magical board game that turns their life upside down, and the only way to make it stop is to finish the game. Except rather than bring the jungle to the real world, this board game transports an entire house into outer space. Perhaps the most fun part of Zathura is actors like Josh Hutcherson, Dax Shepard, and Kristen Stewart before they became household names.

Zathura: A Space Adventure returned to our solar system on July 1, 2021.

Chris Evans knows that “babies taste best.” (Yes, this is one of the most haunting lines in all of cinema.)

This 2013 dystopian film about a perpetually moving train hurtling through the icy wasteland of post-apocalyptic Earth is an edge-of-your-seat thrill ride full of violence and despair. Snowpiercer was made by Oscar-winning South Korean director Bong Joon-ho (The Host, Okja, Parasite). In the movie, a failed climate-change experiment has plunged the world into a new Ice Age, and the only survivors are those lucky — or unlucky — enough to have made it aboard this absurd train. And it ain't stoppin'.

Evans plays a grizzled survivor who rides in the caboose with the rest of the train’s lower class. He leads a violent uprising against the aristocrats in control, working his way up to the front in a gruesome fashion. But what he finds there may not be what he expected.

The Snowpiercer train pulls back into the Netflix station on July 2, 2021.

Speaking of dark dystopias, A Clockwork Orange leaves Netflix at the end of the month. This 1971 masterpiece from Stanley Kubrick — adapted from Anthony Burgess’ 1962 novel — is a satirical cine about a real baddiwad chelloveck named Alex and his droogs. After a crast goes wrong and a baboochka winds up dead, Alex gets a good punchipunching from some bruiseboys, winds up a plenny, and gets his mozg all sorts of messed up.

As you might’ve guessed, this English dystopian future involves a psychopathic young man who speaks an invented future slang (the book includes a helpful dictionary, the movie makes things slightly more difficult). Alex and his “droogs” (friends) terrorizing helpless people in a depressing near-future. But after being convicted of murder, he’s conscripted into a horrifying kind of mental conditioning. The outcome is weird, to say the least.

A Clockwork Orange is disturbing, violent, and not an easy watch. It’s also barely sci-fi, but it’s essential viewing for any film buff.

Alas, after Zombieland rejoined Netflix in May, it is now leaving once again.

From the director of Venom and the writers of Deadpool (long before they made mature but silly superhero movies), the original Zombieland is a delight. It satirizes the ridiculous, gratuitous violence and gore that entertains and frightens. Four strangers in a zombie apocalypse travel the wasteland of the United States in search of salvation, but what they find instead is an unlikely family.

Jesse Eisenberg, Woody Harrelson, Emma Stone, and Abigail Breslin all deliver solid performances as this ragtag group — and an extended Bill Murray cameo is a total delight. Zombie films in the early 2000s were at their best when they blended horror with black comedy, and while Shaun of the Dead might be the pinnacle of that, Zombieland is the best American entry in this delightful subgenre.

Mel Gibson became a star after this Australian cult classic from visionary director George Miller. Following the total collapse of society in this grim dystopia, Gibson's "Mad" Max Rockatansky is a highway patrolman who has to contend with violent gangs of scavengers in the apocalypse. To oversimplify, human society imploded after the world's oil supply dried up, which triggered a catastrophic world war leading to a nuclear apocalypse. What's left is a lawless wasteland of terrifyingly violent madmen. Then there's Mad Max.

Though misunderstood by most critics at the time, Mad Max endured as a cult classic for many years, proving that you don't need a huge budget to stage excellently choreographed stunts. Whether you consider it one of the best films of all time is a matter of taste, but there's no denying that this is one of the most important — and it's a must-see for sci-fi fans.

Resident Evil diehards will surely wait at their streaming device of choice with bated breath for these four animated episodes that take place after the events of the beloved Resident Evil 4 game. Series mainstays Leon Kennedy and Claire Redfield find themselves consumed by a dark conspiracy when a viral attack ravages the White House.

It’s tough to ignore the uncanny political weight of a brainless mob swarming Washington, D.C. — and yet the resonance is there. Rest assured, however, that Resident Evil: Infinite Darkness seems like it’s at least trying to be more than a mere “zombies in D.C.” story. Animation may look less-than-great, but it’s bound to be good schlocky zombie fun for anyone into this sort of thing.

Biohackers is a German sci-fi series that follows Mia Akerlund as she balances her first year at a prestigious medical school in Freiberg with her secret mission of trying to take down a medical conspiracy from the inside. You get your typical love triangles with sexual tension all over the place, except in addition to typical college parties, Mia and her friends are also doing self-surgery implants and smoking bioluminescent weed.

The super-serious approach to biochemistry is impressive, but as a piece of science fiction, it’s a bit muddled. Perhaps the most compelling reason to watch now, however, is that Season 1’s cliffhanger ending is about to get addressed when Season 2 is released rather early in July.

Perhaps the most consistently solid series in The CW's robust Arrowverse lineup based on DC Comics characters, The Flash also leans the heaviest on science fiction to tell its stories. The nerdy and likable Barry Allen is transformed into a meta-human with superspeed after he's struck by lightning when the local particle accelerator explodes. He then dedicates his life to fighting crimes perpetrated by other meta-humans.

The earlier seasons are so much fun as Barry goes through the typical superhero growing pains and suffers through some excellent will they, won’t they tension with future-wife Iris West. Later seasons have their stumbles. Seasons 4 and 5 are not so great, but 6 rebounds quite a bit.

By all accounts, Season 7 — which arrives on Netflix very soon — is one of the worst ever, but even it has some highlights. Longtime series mainstay Cisco Ramon departed Central City in an emotional farewell, as does the latest iteration of Harry Wells.

More like this
Culture
Jan. 16, 2023
Nearly 20 years later, a Will Smith sci-fi movie feels like a warning
By Eric Francisco
Science
Jan. 28, 2023
The best mystery thriller on Netflix ignores a basic fact about hydrogen energy
By Tara Yarlagadda
Entertainment
Jan. 20, 2023
Jung_E has little brain power and even less soul
By Eric Francisco
LEARN SOMETHING NEW EVERY DAY.
Related Tags
Share: