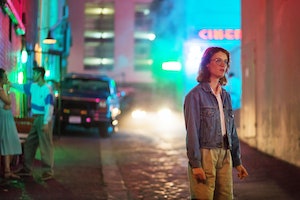 Dearest reader, a question: Have you watched Bridgerton yet?

Netflix announced on January 27 that it had become the most-watched original series in the platform's history: 82 million households watched in the first four weeks it was available. Considering the fact that Valentine's Day is right around the corner, the news couldn't be more fitting. After all, few Netflix series are more steeped in romance than Bridgerton, which focuses on upper-class families as young women are presented at court for the first time.

Bridgerton is not, strictly speaking, science fiction. But there's a lot to love in the titillating series that resonates with sci-fi shows.

For anyone hankering for a taste of tomorrow — with a bit of romance, as suits the season — here are the 11 best science fiction shows and movies available to stream on Netflix. As always, we'll give special focus to whatever's new, original, or leaving soon.

In the year 2092, environmental disasters have made Earth uninhabitable, so most of humanity spends their time in gritty spaceships out in space. Written and directed by Jo Sung-hee, this South Korean space opera feels reminiscent of Syfy shows like Dark Matter but with a much bigger budget.

A ragtag group of misfits who forage for junk in outer space accidentally discover a young girl who turns out to be some kind of android superweapon. Do they sell her off to the highest bidder to finally have enough money to live comfortably? Or do they contend with all the nefarious forces and protect their new friend with their lives?

Space Sweepers will sweep onto the Netflix library on February 5, 2021.

After directing Elf (2003) but before Iron Man (2008), visionary filmmaker Jon Favreau took on the science fiction equivalent of Jumanji. If that sounds too good to be true, then your childhood dreams have just become a reality.

Zathura is a hilarious and ridiculous romp with a premise just like Jumanji: A couple of kids find a magical board game that turns their life upside down, and the only way to make it stop is to finish the game. Except rather than bring the jungle to the real world, this board game transports an entire house into outer space. Perhaps the most fun part of Zathura is actors like Josh Hutcherson, Dax Shepard, and Kristen Stewart before they became household names.

Zathura: A Space Adventure kicks off on Netflix as of February 1, 2021.

After the genre-defining Batman trilogy that included The Dark Knight, acclaimed director Christopher Nolan delivered the iconic yet totally bizarre movie about a technology that allows people to enter dreams. A star-studded cast including Leonardo DiCaprio takes us through a mind-bending heist movie that explores the nature of consciousness in compelling ways.

If you're already a fan of sci-fi, then chances are you've already seen this seminal classic that's both a rock-solid heist movie and a compelling, cerebral bit of science fiction. But if you need a palate cleanser after the purposefully obtuse Tenet, then Inception may be the perfect thing to watch.

The dream that is Inception begins on Netflix on February 1, 2021.

It's a big month for Leo DiCaprio on Netflix, because landing on the platform the very same day as Inception is Shutter Island. A gritty and deeply psychological neo-noir mystery that'll make you paranoid of the paranormal, Shutter Island has one of the most notable twist endings in cinematic history. And because it's been more than a decade since it's release, you may have forgotten it already!

Two U.S. Marshals travel to a hospital for the criminally insane in 1954 to investigate the disappearance of a patient. But between a massive storm and combative hospital staff, they have a hard time solving the mystery. The conspiracy that ensues is enough to make anybody paranoid, but it's an unforgettable mystery.

Sad dad science fiction is a whole mood with movies like The Midnight Sky, Interstellar, A Quiet Place, and even Signs. But if you're looking for something a little more uplifting that involves some fantastical time travel mechanics, then look no further than the utterly charming About Time (2013) starring Domhnall Gleeson as Tim Lake, a young man who — like all the men in his family — can travel through time.

Don't confuse this movie with The Time Traveler's Wife (2009), in which Rachel McAdams also plays the love interest to a male time traveler. Tim uses his powers in predictably amusing and occasionally cringy ways, but the ultimate message about valuing the time we get to spend with those we love remains as potent as ever.

I'll be the first one to admit that Netflix's delightfully smutty period piece set in Regency-era London isn't really science fiction. However, Shonda Rhimes' Bridgerton has bold alternate history vibes at the corners of fantasy and sci-fi, particularly in its treatment of race. It examines London high society during "The Season," which is when young debutantes are presented at court.

The main focus here is on Daphne Bridgerton, the eldest daughter in the Bridgerton family, and her budding romance with the Duke of Hastings. The whole production is a masterclass in sexual tension and high society drama. Season 2 has already been ordered, and Netflix recently announced that Season 1 — which was released on December 25, 2020 — is already the platform's most-watched show ever.

Anyone who loved Bridgerton simply needs to watch Outlander, yet another gripping and romantic period piece that offers just enough of the fantastical to call it genre television. This time-traveling love story is rooted in Scottish folklore and history.

When Claire Randall (Caitriona Balfe), a married World War II nurse from 1946, is lost in time, she awakes in 1743. A stranger in a strange land, Claire falls in love with a strapping young Scottish warrior (Sam Heughan). Their romance is foiled by the evil Frank Randall, who just so happens to be the identical ancestor to her husband in 1946.

It's all based on the book series by Diana Gabaldon and developed for TV by Ronald D. Moore, best known for Battlestar Galactica. The show is full of drama ... and some pretty steamy romance scenes.

At the intersection of supernatural myths and science fiction is Invisible City, a new Netflix original from Carlos Saldanha, Brazilian director behind the Ice Age animated movies and Rio. In it, an environmental police officer discovers the hidden world of mythological entities from Brazilian folklore not long after enduring a personal tragedy ... but could it all be connected?

The series seems steeped in mystery and intrigue, and it just may be tinged with a touch of horror. We don't know a whole lot about it just yet, but it's one to keep an eye on.

Invisible City Season 1 will be released on February 5, 2021.

Netflix's latest anime won't be available until the very end of the month, but it's an otherworldly sci-fi to look forward to nonetheless. High-Rise Invasion brings the unhinged and gory death-game manga that began in 2019 into animation.

A young high-school student finds herself lost in an "abnormal space" seemingly in a pocket dimension where a sea of skyscrapers are connected by bridges. People in masks mercilessly kill any "normal" people they find wandering across the skyscape. The vibes here are very much so in line with something like The Purge mixed with Silent Hill, except it's inexplicably set amongst a bunch of skyscrapers.

This animated sci-fi anthology series from Deadpool director Tim Miller was done in collaboration with David Fincher. The episodes vary between five and 15 minutes and use different animation styles to tell stories within the realms of sci-fi, fantasy, horror, and comedy.

In one episode, three robots go sightseeing in a post-apocalyptic city long after humanity is gone. In another, Hitler dies in various ways across several alternate realities. The series is wildly entertaining and a visual spectacle, although a few episodes feel incredibly regressive. Season 2 has been in development for quite some time, so now’s the time to catch up before it's released — hopefully — sometime later this year.

Netflix’s beloved series of cautionary tales about the future dangers of emerging technologies, Black Mirror, dabbles somewhat often in romance. Though it dips into the realm of horror and satire, Black Mirror is consistent with one question: What can technology do to us when it’s taken to extremes? This Valentine's Day, why not revisit the superb and award-winning "San Junipero" episode?

Season 3, Episode 4 is set in a beach resort town called San Junipero, where a shy woman named Yorkie (Mackenzie Davis) meets the outgoing Kelly (Gugu Mbatha-Raw). It's the full-on '80s, so everyone's wearing flashy colors and living it up. As they begin to fall in loves, cracks in their intimacy begin to emerge just as cracks in the foundation of their reality also show up. I won't spoil the big twist here for those who haven't seen it. But even if you were turned off by Black Mirror's disgusting first episode and some of the other offputting plotlines, this episode is an uplifting and lovely experience that everybody should see.