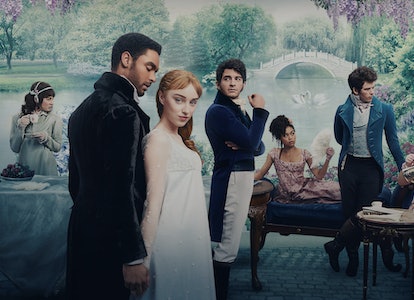 When Bridgerton premiered on Netflix over the holidays, the country was wrapped in a luxurious Regency-era ermine of escapism. Instead of focusing on our own lives, we could fully obsess over the slightest touch or meaningful gaze shared between two characters. The series was wildly popular and just got renewed for a second season. It became "appointment TV," a phenomenon not seen often in a post-Game of Thrones world. This is probably because the two shows share the same genre below the surface — high fantasy.

Yes, Bridgerton technically takes place in a historical era, but beside from that, it has a lot in common with Game of Thrones. Both are adaptations of books with cult followings, and both follow families fighting for power in a society very different from our own.

The comparison gets even more apt when you look closely at the characters. Daphne, who makes the best out of an arranged match, is just like Daenerys; Eloise, her spunky, independent sister is an obvious Arya figure; and Penelope, the redhead who just wants to be wooed is a dead-on early Sansa.

Categorizing Bridgerton is a difficult task. It's a romance, replete with genre tropes like an enemies-to-lovers plot and a fake relationship storyline. But it's also a period drama and a society story, using Lady Whistledown's letters as both a narration device and an easy way to spread gossip and scandal.

This kind of story was revolutionized in yet another hit book-to-screen adaptation — Gossip Girl. To borrow terminology from the fanfiction community, Bridgerton is a Gossip Girl Regency AU, or Alternate Universe.

It's this AU term that makes Bridgerton high fantasy. While the characters feel modern, the rules they must follow are completely foreign to 21st century viewers. While they do dance to modern music, it's the Vitamin String Quartet's cover of "Bad Guy," not Billie Eilish's original.

Because of the "alternate" part of the alternate universe, Bridgerton can play a little fast and loose with historical accuracy. The costumes may not hold up to a historian's critique, but who cares? The dresses are pretty and the society is scandalous.

Just like any work of high fantasy, the show weaves together multiple storylines, some of which received more resolution than others in the Season 1 finale. According to Netflix, Season 2 will focus on Daphne's eldest brother Anthony, but there will surely be room to focus on the huge reveal of Lady Whistledown's true identity.

The alternate universe may not seem like a fantasy, but the escapism and foreign nature of the society wouldn't be out of place in a sweeping fantasy epic.

The only things missing are the dragons, but with this unpredictable show, you never know what Lady Whistledown will dream up in Season 2.