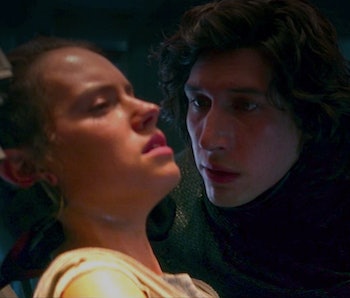 One thing Star Wars fans of every stripe seem to have an opinion on is whether Rey (Daisy Ridley) will hook up with Kylo Ren (Adam Driver) in Episode IX: The Rise of Skywalker. After all, the two are mirror images in the Force, and undeniably share some kind of emotional connection.

Kylo spent most of The Force Awakens chasing Rey, while Rey spent much of The Last Jedi learning about Kylo’s origins, culminating in her rejecting his offer to rule the galaxy together. The ship known as #Reylo has launched a million fan fics, with some arguing it encourages abusive behavior and others claiming a sci-fi pairing isn’t meant to be a manual for IRL behavior.

“It’s a very complex issue,” Ridley herself recently said of Reylo in an interview for Entertainment Weekly. “People talk about toxic relationships and whatever it is. It’s no joke.”

While that debate will likely persist even after The Rise of Skywalker hits theaters, we know the trilogy’s final installment will decide things one way or another. Will Kylo join Rey and her buddies, or will she succumb to the Dark side instead? And will they both make it through the final showdown with the Emperor alive? The possibilities have Reylo stans frothing, and in breathless anticipation of The Rise of Skywalker, we’re taking a flyover survey of the current state of Reylo fandom from somewhat plausible to totally canon-defying absurdity.

“The Rebel’s Last Stand” by how_do_i_turn_this_thing_off

Summary: This in-universe post-TLJ fic was inspired by a simple prompt: “Oh my gOD you know what I want?? I want Rey to be on the brink of death and I want Ben to run to her and kneel over her, crying and begging her not to die.”

He considered her a long moment, his arms solid around her, his torso warm though there was still that last inch between them. “Close your eyes,” he finally said. “Let me into your mind.”

“Will it hurt?” she asked, closing her eyes anyway.

“Breathe,” he ordered, and she felt that gentle press in the Force again, this time against her temples. “It’s not going to be pleasant. If you want me to stop–.”

“Yes,” he said after a moment of surprised silence, sounding pleased. “Yes, I guess you will.” The feeling of his energy in her temples, inside her head, seemed to expand, swallowing her as though she’d been submerged.

The Force. It was all around her, a tidal wave of energy. Pain. Panic. Fear, overwhelming, choking fear, crushing her until she had to gasp to breathe. She was him but she was outside of him as well, watching from two dimensions. What she saw in front of her she saw as though she were standing off to one side, but what she felt she felt as though Ben’s hands were hers, Ben’s will was hers, Ben’s feelings, a roar inside her and all around her until she couldn’t tell what was Ben and what was her and what was the Force inside them both.

This hurt/comfort dynamic is extremely popular in fan fiction, especially when a pairing involves a lot of hostility or angst. Reylo is full of this kind of thing, which makes fic about them healing each others’ wounds feel relevant. This fic also extends the Force-as-sex metaphor many fans picked up on in TLJ. It’s hard to ignore the moment when Rey asks Kylo to put on a shirt when they’re Force-connected. That’s some classic smut-fic banter right there.

“Why?” She said, confidently. She reached under her blanket to pull her underwear back up and stood up to face him. She walked over to him, letting his see her how she was, disheveled and half naked. “Why is this dangerous?”

“You don’t know the Dark side,” He said through a clenched jaw. “I wouldn’t stop if I started, Rey. It is different from the Jedi way. It is raw and untamed.” His voice was low and controlled, and it was doing things to her she couldn’t even explain.

“Did you see me? Did you feel me?” She asked, reaching a hand up to his chest, tracing the scar she had left him with. He shuddered under her touch. “I want to know, Kylo. Could you see or feel what I was thinking of?”

What we have here is a pre-sex conversation between a character with immense power and someone slightly less powerful. Smut connoisseurs may recognize this dynamic from the conversations Edward Cullen has with Bella Swan through the Twilight series, but particularly on their honeymoon. “I can’t have sex with you,” Kylo (aka, Edward) says. “Because I’m just so strong and passionate that I’ll hurt you.” It’s not particularly novel, but hey, it works. If stuff like this is up your street, start with the above fic.

Seized by a sudden desire, Ben couldn’t stop himself from venturing out toward her through the Force. He sensed her presence, just as always, and he skimmed carefully over the surface of her mind, careful not to press so hard as to alert her to his efforts. She was, indeed, asleep, and her mind was so blissfully open in her slumber. With a soft curse inside his head, Ben lamented that he wouldn’t be around to teach her how to secure her mind, even in her sleep. Of course, once he was gone, there wouldn’t be anyone left strong enough for her to guard against.

Her mind was… so entrancing… so beautiful. He wasn’t deep enough to discern any actual thoughts or dreams or impulses, but he could bask in the general feel of her, knowing he would be given no further chances. Pained by the heartbreak he always felt when he indulged in such intimate contemplations, he reluctantly withdrew, knowing his intrusion to be just that, to mention nothing of self-inflicted torture.

But as he drew his consciousness back, he became aware once more of the abiding silence. It was so absolute as to feel overwhelming, and Ben slowly became aware that it made him distinctly uncomfortable. It was another moment, however, before he could discern why.

(Extremely “now this is podracing!” voice) Now this is sexy Force-merging! It’s hard to imagine that Rian Johnson included Rey and Kylo’s half-naked conversations through the Force in his script without knowing, at least on some level, that he was tossing gasoline onto the Reylo fire. If there’s one thing fic writers and shippers love, it’s powerful visual metaphors for sex, and there are few better than psychically mind-melding with your crush. This particular fic is really well-written, and the author captures Ben’s struggle with the Dark side in a satisfying way.

“You are mine” by chrysalisjade

Ben reached out to her, tucking a loose strand of hair behind her ear. “Don’t be afraid, I feel it too.”

Rey gasped as she remembered the first time he had said that to her. When he was trying to reveal the hidden fragments of the map to Luke from her mind, she had felt something. A calling, a pull towards him so strong it was almost magnetic. It was an urge, a strong craving she was dying to satisfy. She couldn’t quite put her finger on it then, but now…

She leaned into his touch subconsciously, not even aware that she was doing it. Ben smiled earnestly at the feel of her weight pressing into his hand. He cupped her cheek, not wanting to let her go.

“I know why you’re drawn to me,” she stated. “It’s the call to the Light. Deep down you know it’s still in you. Let me help you.”

“You’re wrong,” he stated, leaning in towards her.

“We’ll see,” she breathed. She wrapped her hands around his neck and joined lips with him, full of yearning and longing. His arms snaked around the back of her head as he pressed her mouth deeper into his, leaning into her as she melted into him. He could taste her hot, wet mouth against his, and her kiss was soft and welcoming.

Nothing like your lover’s snakey arms and hot wet mouth, amirite? I chose this fic because it’s on the hornier side, which is what I anticipate many Reylo stans are hoping to read. You might notice upon clicking through to this fic’s AO3 link that the author has tagged it “reylotrash,” which is a cheeky way that hornball geek fans like to signify their feelings. Of course, you can ship a couple without being trash, but the means of delineating between these two states is blurry at best. (For instance, I’m Kylo trash, but not necessarily Reylo trash. And I’m definitely Loki!MCU trash, but I’m just a regular Captain American fan. Does that make sense? Doesn’t matter, baby, it’s fandom!)

Now let’s look at some zany #Reylo fic set in alternate universes, shall we?

Han Solo: Ben, you might want to delete that before your mother shows up

Han Solo: Or before Luke shows up

Look. I’m not even going to sugarcoat this one. This fic’s conceit is very simple: all the beloved Star Wars characters are alive in one timeline, and it just happens to be a timeline in which Ben Solo sends a picture of his dick meant for Rey to a group chat that comprises everyone from his father Han to Artoo. In trying to avoid spoilers, I won’t tell you exactly how Ben Solo gets over his humiliation, but I will hint that it involves Rey and a cold shower.

He doesn’t even look up from her phone. “Deleted it from your phone.”

“Don’t need it now. You have my number.”

“That seems a little a little one-sided.”

“Why would you do that?”

He does look up then. “I’m pretty sure I won the app.”

“Hurry Down the Chimney Tonight” by Azuwrite

“I… I stayed up to wait for you…” Rey let out in a feathery groan.

Ben smiled against her, lips rising to her ear, hot breaths causing a tsunami of tingles through her limbs. “So impatient,” he tsked, “so… naughty. ”

Anyway, I digress. If you’re a Reylo stan, or even Reylo trash, and you want to read a fic that’s as seasonally appropriate as it is ridiculously steamy, start here. In this fic, Kylo is somehow also Santa Claus, and he comes to Rey’s house to deliver presents, only to discover that she’s got one thing on her mind. And it’s not a gift card, folks.

To find out if Kylo and Rey are going to bone canonically, catch Star Wars: Rise of Skywalker when it hits theaters Thursday, December 19.