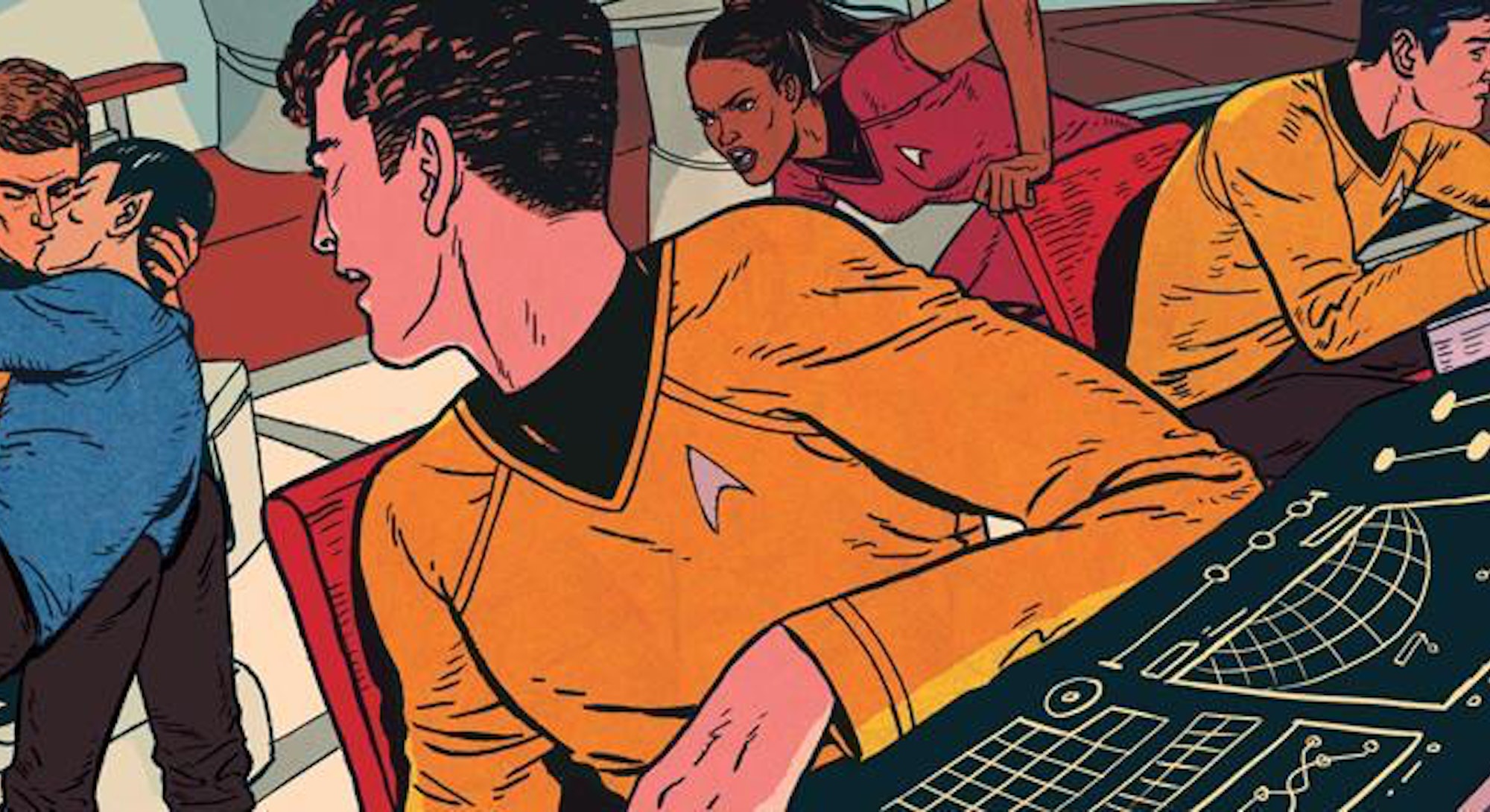 From the original Space Husbands to #GiveCaptainAmericaABoyfriend, slash is here, it’s queer, and it’s not going anywhere.

What is slash anyway?

Slash fiction is a fandom phenomenon that focuses on romantic and often sexual relationships between characters of the same sex. Pairings exist in just about any fandom you can think of, and a fair few that you never imagined.

Slash fiction has proliferated in the Internet age and can be found in any fanfic sharing site, such as LiveJournal or Archive of Our Own (AO3).

Fandom was born with science fiction as early the 1930s. When pulp serial writers became weary of critical fan letters, they began to publish those letters along with the fans’ addresses, in a misguided attempt to publicly shame them. Instead, it opened the door for fans to correspond directly and share their own work. Thus the fanzine was born.

Slash fiction is widely accepted to have originated with Kirk/Spock, lovingly called Space Husbands, in the Star Trek fandom as early as 1968. There is evidence that other pairings were popular among fans but lacked the organized fandom and distribution of fanfic to leave evidence. Fanlore cites The Man From U.N.C.L.E and Wild Wild West as a few of the TV shows from the 60s that may have inspired platonic shipping, but no firm evidence of slash exists.

It took a confluence of specific historical and cultural moments to produce Star Trek’s enduring popularity and fandom. It’s difficult to pinpoint exactly why it spawned such a fan culture, but one factor could be a spike in women’s interest in space and scifi fueled by the space race among women who were still denied actual careers or studies in the field. Renowned superfan Joan Winston (founder of the first Trekker convention) did not go to college because her father preferred to fund her brother’s education. Whatever the cause, women dominated the fan scene and continue to do so today.

Fan fiction at the time was distributed via zines. Romantic and slash fiction most often came from the second wave of Star Trek fans, who were drawn in by the buddy aspect of the show rather than it’s scifi roots and starting placing the characters in other settings or AUs. In a way, creators sowed the seeds of this pairing by consciously centering the show on the friendship between Kirk and Spock. Some other early slash pairings came from Starsky and Hutch and Dirty Harry.

The rise of slash has, with good reason, corresponded with increasingly widespread acceptance of homosexuality and the broader LGBT community. More than a few decades ago, it would not have been possible to disseminate due to censorship laws. While it’s fun to think that Victorian era readers might have shipped Holmes and Watson, there is no way of knowing.

The case of the Sherlockians

The Sherlock fandom is one of the oldest and most enduring fandoms. According to Centrumlumina’s comprehensive 2015 survey of AO3, Johnlock slash was the second most popular pairing. The fandom has certainly experienced a new influx of fans thanks to the 2009 film and, especially, the BBC series Sherlock and Benedict Cumberbatch’s strange androgynous allure.

Yet the source material is the oldest of any of the major fandoms. Arthur Conan Doyle’s character was incredibly popular with readers of the time, and has been the subject of academic and amateur analysis ever since. The many inconsistencies of the source material have actually increased fan enthusiasm for combing the canon and trying to make sense of it. In fact, the Sherlock fandom was the first to use the term canon, as early as 1911.

As for the overwhelming popularity of slash pairing Holmes/Watson, Sherlockians will tell you that the subtext is present in Doyle’s original work. In 1941, the (tongue-in-cheek) “Watson was a woman” theory emerged, pointing out the ways in which the pair behaved like, well, an old married couple. And well, as we all know, you don’t have to be hetero to be an old married couple.

Sherlockians have also been the first major fandom to break into traditionally published fanfic and erotica. This is made possible because the Holmes canon (with the exception of retirement age Holmes) is now public domain, but it proves the commercial appeal of quality fan fiction, even with the abundance of free online fics.

Why women are driving the movement

Fandom communities are very diverse but in terms of gender they skew heavily female-identifying. Why then, the fixation with M/M pairings?

For one, there are still a whole lot more male characters available to choose from. The dearth of F/F fiction certainly has to do with the fact that two or more prominent female characters in one show is still surprisingly hard to find. The current top fandom for F/F is Once Upon a Time and Buffy the Vampire Slayer remains one of the top F/F fandoms years after its run ended.

But the M/M fantasy runs deeper than mere convenience. It’s impossible to generalize what it means to everyone, but it is commonly a safe avenue for (often young) women to explore sexual desires. Slash fiction is shaping a new wave of sex positivity.

As Morgan Leigh Davies wrote, “when the players in your romantic drama are both men, or both women, the necessary societal complexities that manifest in male/female relationships need never come up.” Embodying a masculine character is a way to step out of the complex sexual politics that come with living as a female.

As prominant romance and slash author Elinor Gray explained to me, it also allows the reader the identify equally with either role in the romance, rather than feeling shoehorned into a particular gender role. It also has to do with rewriting the way masculinity is portrayed in a way that is more appealing to a female audience:

“One of the things I like a lot about M/M romance,” Gray says, “is reading or giving male characters a softness that we, as media consumers, don’t always get to experience or explore. Men, fictional or otherwise, aren’t necessarily encouraged to be gentle or tender or kiss soft places, but in M/M romance they totally are.”

Slash is here to stay

Part of what keeps slash enthusiasm alive is the possibility of seeing these pairings become canon. Fandom is driving the increase in queer representation in media and forcing creators to acknowledge them. BBC’s Sherlock has flirted with the possibility more openly than other adaptations. Kirk/Spock shippers have their hopes set on the upcoming TV series by Bryan Fuller. Xena femslashers were recently validated after twenty long years.

As long as creators continue to give us bland het romance in spades, fans will continue to rewrite the story.