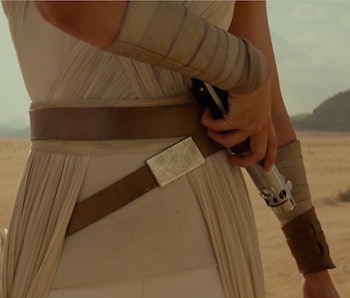 Kyber crystals are some of the rarest and most important gems in the Star Wars galaxy. As the power source of all lightsabers, they’ll be crucial in Star Wars: The Rise of Skywalker when Rey tries to rebuild the lightsaber that snapped in half during her showdown with Kylo Ren in The Last Jedi.

Trailers (and some leaked images of the movie’s climactic moment) suggest several iconic lightsabers could appear in Episode IX, but what if Lucasfilm is lying to us? At least one fan thinks the studio could be playing Jedi mind tricks in the specific lightsabers shown, and it could reveal a huge twist about one of the biggest lightsabers in the Skywalker saga.

Huge spoilers follow for The Rise of Skywalker, so turn back unless you want a supposedly vital plot point from late in the movie ruined for you.

Let’s back up for a minute.

Fixing your broken laser sword in Star Wars should be way more complicated than wrapping it in duct tape, even though the prop Rey uses in The Rise of Skywalker looks like her broken one with a new strap across the mended, fractured middle. A November 2018 episode of The Star Wars Show on YouTube confirmed that the “broken lightsaber” has a “broken kyber crystal at the center of the hilt.”

That complicates some leaked images from back in October in a huge way.

Some leaked images that hit the internet in October show Rey and Ben Solo standing side by side, and they’re both wielding blue lightsabers as they prepare to face Emperor Palpatine. (We’re not gonna link to them here, but if you want to find them online you probably can.)

Rey needs a new kyber crystal to fix this busted lightsaber, so where does she get it? Does she harvest it from Luke’s green lightsaber, which is still on Ahch-To with the Caretakers? Does Rey somehow find one of these exceedingly gems somewhere else, even though Ilum (the planet kyber crystals come from) was presumably destroyed when Starkiller Base exploded?

That’s where this new theory comes in. At least one fan on Reddit thinks The Rise of Skywalker’s marketing and leaks are hiding a big lightsaber twist that involves Luke’s iconic green weapon.

The redditor notes that “Luke’s lightsaber was blue in all of the promotional material for Return of the Jedi” but the final version obviously had his iconic green lightsaber instead. We know years later this is because production needed to differentiate the color from the blue skies of Tatooine, but Star Wars canon has evolved over time to incorporate green lightsabers into Jedi tradition.

If The Rise of Skywalker were to incorporate a green lightsaber — especially Luke’s green lightsaber — then it would resonate with Star Wars tradition in a great way. Could one of the two blue lightsabers wielded by Rey and Kylo against Emperor Palpatine in this movie actually be green?

This fan theorizes that “Leia’s blue lightsaber is actually Luke’s green lightsaber that J.J. [Abrams] is keeping blue until the final cut of the film to keep it from getting leaked.” Leia having any lightsaber at all in The Rise of Skywalker is a big deal, as shown in the “Celebrate” TV spot (featured below). But is this the repaired version of the Skywalker lightsaber Rey has? Did Leia repair it for Rey? Or is this another saber altogether?

In case all of that wasn’t confusing enough, here’s another question: Assuming Kylo Ren is redeemed and becomes Ben Solo again, what lightsaber is he wielding?

Lightsabers turn red when “bled” and forced to obey the Dark side users’ will, whereas a white kyber crystal will usually resonate with a Light side Force user and transform into a color, usually blue or green, that reveals an aspect of their personality. Colored lightsabers have been corrupted to red in Star Wars canon, and red lightsabers have been purified to other colors as well.

There’s also the possibility that after all these years, they somehow recover Obi-Wan Kenobi’s blue lightsaber left in the First Death Star at the end of A New Hope. Darth Vader presumably picked it up, so maybe Kylo Ren tracks it down at some point? The possibilities feel almost endless, but it definitely seems like we’ll see more than one “good” lightsaber before the Skywalker Saga is through.

My personal favorite theory? Rey builds a complex dual-core double-bladed lightsaber that detaches in the middle, and she just gives Ben Solo the other half after he sheds the Kylo Ren persona and tosses his red crossguard lightsaber aside.

Star Wars: The Rise of Skywalker will be released December 20, 2019.