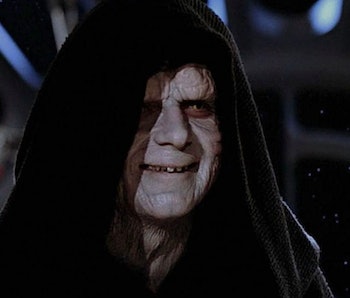 The First Order has always felt like the Empire 2.0, but it’s never been clear exactly how the two evil organizations connect. The answer may come in Star Wars: The Rise of Skywalker when the Emperor himself returns to the big screen, but before then, a new Star Wars video game may have spoiled the big reveal. One detail from Jedi: Fallen Order could reveal a direct connection between the Empire and the First Order that explains how Palpatine planned the entire thing all along.

Big spoilers follow for Jedi: Fallen Order and potentially for The Rise of Skywalker as well.

Hardcore Star Wars fans might already know the connections between Ilum, a planet that both the Jedi and the Empire mined for its kyber crystals, and Starkiller Base, the planet-sized Death Star from Star Wars: The Force Awakens. Kyber crystals are the mystical rocks used to channel Force-related energies. They power lightsabers and were also used as the energy source for the planet-destroying laser cannons of the First and Second Death Star, along with Starkiller Base.

Fans have theorized for years that Ilum and Starkiller Base are the same planet, and now it seems like they were correct.

During Jedi: Fallen Order, which takes place shortly after the Star Wars prequel trilogy, the Jedi padawan Cal Kestis visits Ilum to find a kyber crystal so he can build his own lightsaber. Viewed from orbit in the game, we can see that Ilum is heavily occupied by Imperial forces that are mining it for kyber. The implication here is that the mining process gradually transforms the planet into Starkiller Base over the half-century that follows. There’s still no canonical confirmation that this is the case, but it seems fairly obvious.

As one Reddit commenter pointed out, the removal of the planet’s belt “was necessary for the mining of kyber … and allowed for the installation of the infrastructure effectively turning Ilum into Starkiller Base.”

In theory, this could mean that Palpatine began the Starkiller Base project even before the end of the Clone Wars and the Death Star was actually just a prototype for the final planet-sized weapon. In other words, the First Order’s grand plan in The Force Awakens to use Starkiller Base as the superweapon that would give them dominion over the entire galaxy may have been Palpatine’s plan all along.

Has he been alive all this time, pulling the strings from the shadows, building up to a triumphant return in The Rise of Skywalker? Or did the First Order merely steal Palpatine’s plan after his death? It’s also possible that all of this is a coincidence and the First Order merely claimed a piece of free real estate years after Return of the Jedi.

We know that what remains of the Empire is in shambles by the time The Mandalorian takes place, but the Disney+ show already seems to be hinting at the origins of the First Order. However, if this theory is correct, then the line between Emperor Palpatine and the First Order could be even more direct than we thought.

Jedi: Fallen Order is out now, and Star Wars: The Rise of Skywalker will be released in theaters December 20, 2019.