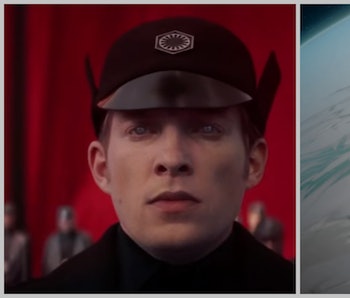 Starkiller Base is more powerful than either of the previous versions of the Death Stars, but if it used the same kyber crystal technology the First Order needed a tremendous stockpile of crystals to make that planet-killing weapon work. Now, the Star Wars Instagram account recently posted information about Starkiller Base that could suggest it was originally the planet Ilum, first seen in canon in The Clone Wars.

Over in a general discussion on the Star Wars Reddit page, fans are wondering if the March 7 post to the Star Wars Instagram suggests that Starkiller Base and Ilum are one in the same. Though Ilum was mentioned in some non-canon Star Wars material as far back as 1991’s comic series Dark Empire, the planet was finally made canon in 2012 The Clone Wars episode “The Gathering.” In the episode, Ahsoka takes a bunch of Jedi younglings to Ilum to get the kyber crystals for their lightsabers. At this point, Ilum was the main spot for these crystals, though that changed a little in Rogue One.

Probably the biggest game changer of Rogue One was the revelation that the Death Stars’ planet-killing “Superlaser,” was powered by kyber crystals, which sort of makes both Death Stars and the Starkiller Base like giant lightsabers in space. In Rogue One, the Empire was plundering the Jedi Temple on the moon of Jedha for these crystals. Back in October 2016, the fact that Jedha was a cold desert full of kyber crystals led many to believe it was the true origin of Starkiller Base. The Star Wars Instagram even posted a similar “Did You Know?” photo about Starkiller Base back then, too.

Ilum becoming Starkiller Base makes more sense than Jedha. While the Empire was moving crystals out of Jedha to make the Death Star, Starkiller Base was built into a planet. And because this post from the Star Wars Instagram mentions that the planet was “little known,” it stands to reason that it was Ilum. In The Clone Wars, it’s pretty clear that the Jedi wanted to keep Ilum a secret. But if Kylo Ren was formerly a Jedi training with Luke Skywalker, he could have easily figured out where Ilum was and how useful its resources might be to the First Order.

Because the continuity of Star Wars Rebels continues to dovetail with the most recent films, an appearance from Ilum could be imminent. Either that or The Last Jedi is gearing up for a flashback involving this kyber crystal-rich world when it debuts on December 15.