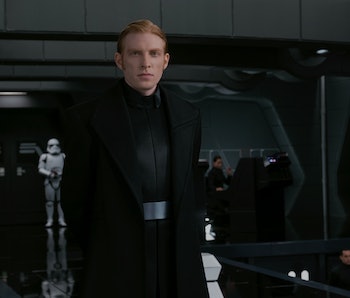 The First Order has always been a mystery in the Star Wars sequels. The new evil organization seemingly sprung into the world moments after the Empire’s collapse (kind of like how the Rebellion began pretty much immediately after the Republic crumbled in Return of the Jedi), but we have no idea how that happened. However, a new trailer for The Mandalorian could reveal how The First Order got its start ahead of the show’s premiere on November 12 and the release of Star Wars: The Rise of Skywalker in December.

Speculative spoilers for The Mandalorian and Star Wars: Episode IX ahead.

The Mandalorian trailer in question, which premiered on FX, opens on a longer version of the speech that Werner Herzog’s mysterious character gives to the Mandalorian. We’ve heard bits of the scene before, but this cut is a lot more revealing.

“I see nothing but chaos,” he says. “We must restore the natural order of things. Don’t you agree?”

During those lines, we see some images of Stormtroopers lined up and ready to attack. The camera then cuts to the Mandalorian, who seems unconvinced (it’s tough to tell through the mask) but will likely take the job anyway because that’s what bounty hunters do.

Based on this new footage (along with our previous speculation), it seems Herzog may be playing some low-level Empire leader on Tatooine who takes it upon himself to restore the Empire after Palpatine’s death. That’s no surprise that The Mandalorian will explore this story since the show takes place just a few years after Return of the Jedi and a couple of decades before The Force Awakens.

Of course, if you played Star Wars: Battlefront II you know that the game also hinted that the origins of the First Order, revealing that some Empire leaders put the plan into place just shortly after Palpatine fell. But how it all actually happened is a mystery, and it looks like The Mandalorian could finally answer those questions once and for all.

With Star Wars: The Rise of Skywalker also set to reintroduce Emperor Palpatine, a new faction of Sith Troopers, and probably a whole lot more, there might not be time to explain where the First Order came from. Thankfully, it seems The Mandalorian will answer those questions and help set up Episode IX in the process.

The Mandalorian premieres November 12 on Disney+. The Rise of Skywalker hits theaters on December 20.