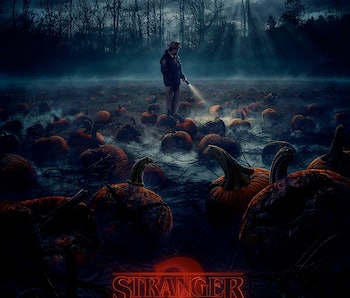 The genre of science fiction is a lot more than just casual spacefaring romps through galaxies near and far. It’s also about computerized simulations that we’re probably living in right now, and ominous men in rabbit costumes foretelling the end of the world. Unfortunately, it can also be even darker visions of the future than this.

Across this list of several items from Netflix’s sci-fi best, you’ll encounter more than a few dark futures meant to frighten you, tried and true exploration sci-fi classics, cautionary tales of more than one kind, and even props to everyone’s favorite Eggo-loving telekinetic.

Netflix has you covered with a motley assortment of sci-fi in the form of both movies and television shows. So here are the 11 best pieces of science fiction that Netflix has to offer right now for the next time you’re hankering for a taste of tomorrow:

There’s no better time to watch, or rewatch, Netflix’s wildly popular and totally awesome ‘80s nostalgia show about a group of kids dealing with an interdimensional monster invading their town. Season 2 drops on October 27, 2017. Though it inches towards mythical fantasy, Stranger Things represents some of Netflix’s best original programming.

You can only find Star Trek: Discovery on CBS All Access, but Netflix has an ample collection of the sci-fi TV juggernaut. Not only is there the original Star Trek from the late ’60s, but there’s also the animated series from the early ‘70s, along with The Next Generation, Voyager, Enterprise, and Deep Space Nine. Strong opinions among hardcore fans vary about which is best, but with such a massive franchise, how could you go wrong?

Syfy’s Dark Matter is the hidden gem of fun and easily accessible sci-fi TV on Netflix, and there’s no better time to get into it considering Season 3 hit the streaming platform in late September.

Trap a bunch of outlaws aboard a ship, wipe their memories while they’re all in cryosleep, and wake them all up at once. It makes for one hell of a start to a show. The drama continues, fueled by suspicion and the inevitable camaraderie that develops.

The show feels a lot like fan-favorite Firefly in that it features a motley crew with a “mission of the week” format, but the way Dark Matter delicately unravels the complicated backstory of each character is perfectly paced. Various, fun technologies are introduced along the way. There’s also a fun side-plot involving the development of superpowered individuals.

In Australian Aboriginal cultures, the “Cleverman” is a mythological figure described in this drama as “like the Pope of the Dreamtime … the conduit between the present and the Dreaming.” The show reimagines this role as something of a superhero that can heal people and see into the future while also connecting the real world to the spirit world. In Cleverman, humanoid creatures referred to as “hairies” are discovered and live as a persecuted lower class. It’s up to the Cleverman to make things right in this sci-fi dystopian action drama.

Though often regarded as a cult classic horror movie, Donnie Darko also dabbles in some pretty heady sci-fi focused on time travel. Jake Gyllenhaal plays a troubled young man haunted by a figure in a horrific rabbit suit that offers up some cryptic warnings of the coming apocalypse. Mixed up are hints of time travel, temporal vortexes, and a dizzying amount of weirdness.

The always-impressive Denzel Washington stars in Déjà Vu, in which he plays an ATF agent trying to capture the terrorist responsible for a ferry bombing that kills several hundred people. He uses experimental technology from a top-secret program to fold time four days into the past to monitor the criminal that’s tracking a woman that could give him away. Déjà Vu evolves into a literal race against time in an effort to prevent the bombing using the technology.

… or maybe just the first Matrix film. One of the earliest and perhaps all-time greatest creative ventures to come from the Wachowski siblings is The Matrix. When the original was released in 1999, The Matrix changed the landscape for cinematic action irrevocably. In it, a hacker named Neo discovers that he’s been living inside a simulation hundreds of years in the “future” that’s all orchestrated by the robotic A.I. that rebelled against their creators. After learning the “truth,” he emerges in the “real world” and works with the human resistance to ultimately discover that he’s the prophesized, reborn One that could save them all.