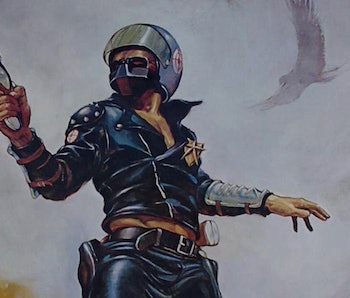 There is no action movie franchise more well-respected and revered than this one.

This petrol-soaked vision of a dystopian future has captivated audiences for over four decades and continues to have one of the most passionate and dedicated fanbases of any film franchise not set within the Marvel Cinematic Universe.

That’s evident in the overwhelmingly positive way that 2015’s Mad Max: Fury Road was received and in the ongoing interest in Miller’s planned, Anya Taylor-Joy-led Furiosa prequel film. But before Furiosa, Immortan Joe, or the Thunderdome, there was just Max. Amazon Prime users only have a few days left to see the film that started it all though, so here’s why you should carve out the time to watch 1979’s Mad Max.

At the heart of Mad Max is its unique dystopian future. While the film doesn’t quite dive as deep into the franchise’s nightmare world as its sequels do, it does a very good job at setting up and creating the franchise’s volatile, stark world. Shot entirely in Australia, the 1979 action film envisions a world where traditional society is collapsing and gangs are running rampant on the streets — terrorizing innocent people with their customized wild rides.

A lot of the film’s effectiveness has to do with its bare-bones, almost skeletal nature. Made on a notoriously small budget, the Mad Max crew didn’t have enough money to waste on expensive locations, intricate costume designs, or big visual effects sequences. However, instead of that hindering the film, it actually ends up helping it.

The way that everything, including the actors’ costumes, all feels strangely stitched together ultimately helps Mad Max to believably sell its vision of a world coming undone. The film’s stark, plain cinematography achieves a similar effect, as the bright sunlight of the Australian outdoors, the muted greens and yellows of the environments, and the boring gray of the pavement all combine to give the film a harsh, unvarnished look — one that perfectly suits its dystopian setting.

Part of the charm of Mad Max comes from the work of its largely Australian cast as well — particularly Mel Gibson as its titular police officer-turned-vigilante and Hugh Keays-Byrne as the savage Toecutter. Gibson landed the role of Max early on in his career, but his performance as the intimidating and vengeful character still remains one of his very best. Meanwhile, for his part, Keays-Byrne (who later returned to the franchise as Immortan Joe in Mad Max: Fury Road) brings an unhinged, terrifying quality to Toecutter that makes him the perfect counterpoint to Gibson’s stoic Max.

But the real reason to watch Mad Max is the same as it is for every installment in the franchise, and it’s George Miller’s direction. Miller made Mad Max with a wildly smaller budget than he did any of its sequels, but even despite those constrictions, his work on the film still proves that he’s, undeniably, one of the greatest action filmmakers to ever work in the medium.

In fact, the minimalist aesthetic of Mad Max only works to elevate and spotlight Miller’s talents that much more. By working with so little, Miller is forced to rely solely on the merits of his camera movement, camera placement, and editorial instincts — and the result is a smashing success.

Over the course of Mad Max’s 93-minute runtime, Miller somehow manages to never drag out a chase too long, end one too early, or cut around too much. Even the quick cutting style he applies to the moments just before a car crash or accident occurs — including the use of extreme close-ups on the victims’ bulging eyes — just adds another level of insanity and chaos to the film’s various action sequences.

Mad Max may not be quite as beloved online as some of its sequels are, but it’s still a strong cinematic accomplishment in its own right. So many of the ingredients that made Fury Road great and unique are present and on full display in Mad Max, and watching it, you can’t help but feel impressed by how much Miller and his collaborators were able to achieve in spite of their budgetary constraints.

The film doesn’t have nearly as many explosions or visual effects that so many other Hollywood action films do, and yet, it manages to be more thrilling than most of its other competitors. It’s still the sterling example of how to do an apocalyptic action film right.

Mad Max is available to stream on Amazon Prime until May 1.