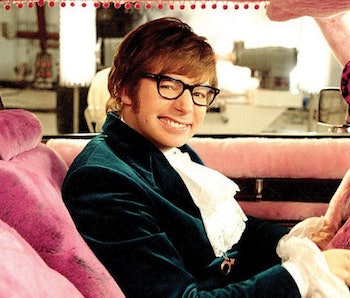 Every month, Netflix goes through a bit of a streaming library reset. What stays and what goes in its ever-growing list of films and TV shows is always a surprise. More often than not, subscribers aren’t aware of a movie’s availability until it’s nearly gone. That’s why it’s high time to watch the best spy spoof around before it leaves Netflix next month.

All three Austin Powers movies — Austin Powers: International Man of Mystery, The Spy Who Shagged Me, and Goldmember — are leaving Netflix on May 31. But it’s the trilogy’s final film that most deserves a watch before it’s gone for good.

Yes, it’s probably a very unpopular opinion, but Goldmember is arguably the best and most entertaining of the three. Here's why.

Parodying the James Bond movies Goldfinger and You Only Live Twice, Austin Powers in Goldmember sees Austin (Mike Myers) knighted for his services in finally capturing the nefarious Dr. Evil, who is plotting to melt the polar ice caps with the help of a tractor beam. Austin is later upset when he discovers that his dear old dad, Nigel Powers (the inimitable Michael Caine), didn’t bother coming to the ceremony.

For the first time, there’s a good reason for why he’s not there to support his son: Nigel’s been kidnapped by the disgusting villain Johan van der Smut, aka Goldmember, and taken to 1975. Austin teams up with FBI agent Foxxy Cleopatra (Beyoncé Knowles) to take Goldmember and Dr. Evil down, hilariously culminating in an Austin Powers film adaptation directed by Steven Spielberg.

The third film of any trilogy is usually the weakest of the bunch, when all modicum of dignity is thrown out the window in lieu of nonsensical shenanigans and a flimsy plot. These attributes are exactly what makes Goldmember good. It leans into its zaniness, clearly unconcerned that the plot makes little sense.

It amplifies what made the first two installments memorable, butters it up with even more ridiculous theatrics, celebrity cameos (Britney Spears, Tom Cruise, Gwyneth Paltrow), product placement (Preparation H, Subway), and excessive childish laughter from Seth Green’s Scott over the constant use of “on the hole.” The reveal that Dr. Evil and Austin are actually brothers, separated as babies, is just the icing on the cake of its flagrant absurdity.

Austin Powers in Goldmember is also the easiest to sit through upon rewatch. It’s bad, but in a good way. It mocks Austin’s daddy issues — a theme rampant in most films — and then parallels it to Scott’s inability to live up to Dr. Evil’s expectations of what a son should be. On top of all that, the film has the most ludicrous villain of the trilogy, giving it extra points.

Sure, the jokes don't always land, but the slapstick comedy is usually on point and Caine is perfect as Nigel. Ultimately, Goldmember understands that it’s a parody within a parody, even more than the first two films. That, if nothing else, makes it worth checking out.

Austin Powers in Goldmember is streaming on Netflix until May 31.