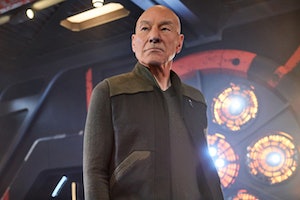 If you've already watched Tiger King multiple times you probably need a new streaming service. Netflix, Hulu, and Disney+ are all great, but there's a limit to how many times we can rewatch Avengers: Endgame.

So with that in mind, Inverse is rounding up every free streaming app available now. From CBS All Access to HBO, some of the best streaming services are flinging open their doors to give us a respite from coronavirus quarantine. Here are 10 options to choose from, and check back soon as we'll continue to update this article as more options open up.

Promo: Free, but only for some shows

Apple announced on April 10 that it's offering up a selection of its original shows from Apple TV+. The service previously offered up a free year-long trial for anyone who purchased a new Apple device, but now it's opening the platform up to everyone.

You can check out Apple TV+ by downloading the app or clicking this link (if you're in the U.S.) No subscription needed.

Promo: Free, for a limited time...

HBO announced on Thursday that it's opening up a massive library of over 500 hours of original programming to stream for free. The full list includes nine full shows (Sopranos, Veep, The Wire...), 10 documentaries and docuseries, and 20 movies (Pokémon Detective Pikachu! The Lego Movie 2!)

Top Pick: There's a lot of great options here, but if you're looking for a pure escape the best thing you can do is watch rich people suffer on Succession. Season 1 is a bit of a slow burn, but Season 2 is a masterpiece.

Promo: 30-day free trial upon sign-up with the code FREE30.

After watching a couple of British dramas, you’ll be hooked. This streaming service is American-based, but offers a plethora of series primarily from the United Kingdom, but also has movie and TV offerings from Ireland, Canada, Mexico, Australia, and Spain. Acorn TV usually offers a seven-day free trial, but during the quarantine and chill phases of our lives, the streamer is offering a 30-day free trial for new customers.

Top pick: No Offence hails from the creator of Shameless. A procedural crime drama with plenty of humor and mystery, the series follows a female team of Manchester cops — led by Dracula’s Joanna Scanlan — whose job is to find and arrest serial killers.

CBS was one of the first studios to launch a streaming service. CBS All Access started off with Star Trek: Discovery being its only original show back in 2018 and has grown ever since. Its library now includes The Good Fight, Jordan Peele’s The Twilight Zone reboot, and the Lucy Liu-starring drama called Why Women Kill. In addition to original shows, subscribers can also watch network favorites like NCIS and Big Brother. There’s also an option to watch shows live as they air on TV.

Top pick: Star Trek: Picard is currently the best show to binge on the platform. The series is a continuation of the wildly successful The Next Generation. Set immediately following the events of Star Trek: Nemesis, Jean-Luc Picard (Sir Patrick Stewart) must contend with Commander Data and the planet Romulus’ destruction. Filled with plenty of Easter eggs and connections to Star Trek: Discovery, the series has quickly become a fan-favorite and a great entry to the Star Trek universe.

Unlike HBO Now or other premium cable channels, Showtime offers an extended free trial. There's no need to have cable services to get it, either as the premium cable channel now has its own sign up and app, and comes as an add-on with streaming services like Amazon and Hulu. Showtime includes a mix of original programming, with series like Homeland and Dexter, as well as movies like 2004’s The Punisher, starring John Travolta. The biggest reason to get Showtime right now is because Hustlers will be available to watch on April 25 instead of in June.

With SXSW and the Cannes film festival canceled due to the coronavirus pandemic, Sundance Now brings the film festival experience straight to your TV. The streaming service is available as an add-on subscription with Amazon, Hulu and on its own. While the service boasts a number of exceptional films, including Frances Ha and Wuthering Heights, the streaming app also includes true crime series, British TV shows, and other dramas like the Canadian adaptation of Being Human.

Top pick: A Discovery of Witches. The oft-discussed British fantasy drama, based on the book series by Deborah Harkness, follows the story of a witch and a vampire who fall in love and is set in a world where they, along with demons, must work alongside humans to survive. The series is a bit of a cross between Starz's Outlander, HBO's True Blood, and multiple witch-centered dramas like Charmed, so there's a little bit of everything for everyone.

Shudder is the go-to streaming service for all things horror. With an extensive film library, horror movies and supernatural series have never been more easily accessible. From Poltergeist to Nicholas Cage’s Mandy, there’s no better time to try it out.

Top pick: A Girl Walks Home Alone at Night is incredible. Directed by Ana Lily Amirpour, the film is set in Iran and follows an unnamed vampire. Masterfully told, the film employs the use of shadows and black-and-white cinematography to tell its haunting and unique story.

Celebrated as the best streaming service for film enthusiasts, Criterion Channel boasts a collection of movies spanning decades and countries. From Alfred Hitchcock’s horror classics to Céline Sciamma’s Girlhood, Criterion is the best place to find the most notable independent, studio-produced, and international films. The best part of the service is that it spotlights directors and genres, with occasional guests like Guillermo del Toro there to guide the movie-going experience.

Top Pick: Stanley Kubrick's Dr. Strangelove. Released in 1964, the film's premise is about what would happen if the wrong person were to take charge of any given situation. Worst-case scenarios ensue, but everything is played for laughs.

Promo: Go to the Roku Channel and visit the Home Together — Special Offers row to get a 30-day free trial and 20 free premium networks all in one go.

In response to the coronavirus outbreak, the digital media and streaming player Roku launched the “Home Together.” The initiative offers a special extended free trial for new customers that includes access to Showtime, Epix, Hallmark, A&E Crime Central, Smithsonian, and Acorn TV. The offer is only limited time only, but it’s probably a more effective way to watch streaming apps without having to sign up for them separately.

Top Pick: There's a lot here, but you can't beat The Nanny, which is set to leave the service later this month.

Like Acorn TV, BritBox has a collection of films and TV series hailing from the UK. However, don't expect to find the same exact content. In fact, BritBox's library offers a variety of arguably better-known British series like Helen Mirren's Prime Suspect and Olivia Colman's comedy series Rev.

Top Pick: The Office. The original mockumentary series starring Ricky Gervais may have only run for two seasons — NBC's The Office ran for nine seasons — but the British comedy is the one that started it all and is worth the watch.

More like this
Entertainment
7 hours ago
We Finally Know Where Westworld Will be Available to Stream
By Dais Johnston
Culture
Jan. 25, 2023
30 years later, Star Trek is about to pay off a massive villain comeback
By Ryan Britt
Entertainment
Jan. 31, 2023
How Can You Stream Yellowjackets? Why Paramount+ With Showtime Isn't as Complicated as You Think
By Dais Johnston
LEARN SOMETHING NEW EVERY DAY.

This article was originally published on April 4, 2020