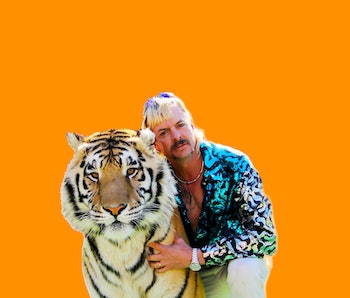 Wild animals, cult-like lifestyles, and attempted murder-for-hire are just some of the highlights of Tiger King, the Netflix docu-series about the truly bizarre world of big cat keepers that's was the most-viewed content on Netflix on March 29, according to the app's internal Top 10.

Aside from the feuds between big cat rescue shelters and breeders, the series poses a tough question that is near the center of the story, the answer to which colors the entire saga: Can a person actually tame a tiger?

The answer to whether it's possible to tame a tiger hinges on understanding the difference between training animals and domesticating them.

Animal domestication is a slow process that happens over countless generations of breeding. We know that it took thousands of years for wolves to become dogs, for example. We also know that the process led pet dogs to develop different behavior, brain function, and even muscle development to their wild peers.

Many of the animals we see as pets, farmyard fare, or even colleagues began the process of domestication thousands of years ago. It is hard to imagine what the ancestor to today's cow looked and behaved like, if purely because cows as a species have changed under human direction, and to suit human needs.

Essentially, wolves didn't become dogs in a day, and nor can a tiger go from wild animal to household cat in a couple of generations. In fact, there is some debate as to whether pet cats are even domesticated right now, despite the fact that we have been keeping them around for millennia.

In the case of Tiger King, the lions and tigers Joe Exotic keeps and breeds may fall into the "companionship" category, or perhaps more accurately, a fourth category: Entertainment.

For breeders, one major source of income is “cub petting,” and Tiger King is full of shots of smiling folks posing with tiger cubs. They seem harmless, like overgrown kittens.

But these animals are not domesticated — they are just young.

The United States Department of Agriculture allows people to interact with tiger cubs aged just 4 to 12 weeks. After that, they are considered too large and too dangerous for human interaction. Older big cats are expensive and difficult to maintain, which can lead to a never-ending cycle in which breeders keep making baby cats to pay for the older ones — or, as in some tragic cases shown in Tiger King, breeders may euthanize the older animals to cut costs.

As the docu-series shows, even experienced animal handlers run into issues with the wild creatures they care for. The big cats lunge, snap, and, in one dramatic scene, a zookeeper interviewed in the show loses an arm.

Adrienne Kruzer, a licensed veterinary technician, explains why keeping big cats as pets is a problem in The Spruce Pets.

“Tigers are large, strong, and dangerous cats. They have the ability to take down a 500-pound antelope, are strong swimmers, and are very territorial,” Kruzer explains.

“Although tiger cubs are small and cute, they will quickly grow up to be hundreds of pounds with several inch-long canine teeth and claws that you'd rather not get scratched by.”

And while Kruzer explains that it’s “problematic to consider keeping a tiger or any big cat as a pet,” they’re still enormously popular. Tiger pets “outnumber the wild species that remain,” she writes — a fact mentioned in Tiger King several times.

In the Netflix series, the subjects talk about big cats like they are an addiction. They talk about the moment they got hooked, when they acquired their first exotic animal. An interview with TV producer Rick Kirkham appears throughout the seven-episode series, wherein Kirkham about his arrangement to document Joe Exotic’s lifestyle. Kirkham memorably describes the powerful feeling that comes with being around the incredibly strong, wild animals.

A song by Exotic featured in the series includes this lyric of powerful testimony:

Wild species dwindling — But while breeders and collectors trade big cats, tigers in the wild are not doing so well.

Due to poaching and deforestation reducing their natural habitats, Sunda tigers, a species native to Southeast Asia, are seeing serious population decline.

Wildlife experts estimate that fewer than 400 of the species remain in the wild, as Inverse reported in February.

Conservation projects already underway to protect Sunda tigers include efforts to curb poaching, like setting stricter laws, and working with local law enforcement to enforce them.

As some of the characters in Tiger King suggest, the money people spend on buying, visiting, and petting tiger cubs could be better directed to conservation and anti-poaching projects to preserve the tigers we have in the wild, rather than expanding private, exotic-animal empires.

And we didn’t even touch on the murder, polygamy, and drug use. Just — go watch Tiger King.