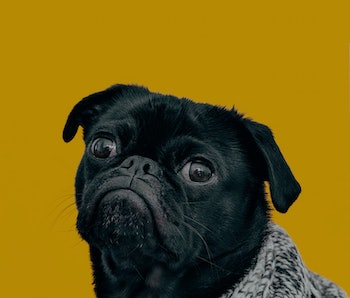 In 2014, scientists from the University of Portsmouth discovered an awkwardly adorable truth about which homeless dogs get adopted. The strays that were the best at raising their inner brows and widening their eyes found new homes more quickly than the dogs who couldn’t flash the classic puppy dog eyes. On Monday, a new study shows why this is no coincidence: Dogs evolved to have expressive eyebrows precisely because we’re so affected by puppy dog eyes.

In the journal Proceedings of the National Academy of Sciences, the team behind the new paper explains that these findings suggest expressive dog eyebrows are a result of humans’ unconscious preference, which stuck around because eyebrows help dogs communicate how they’re feeling to their owner. While scientists have known that dogs can manipulate our emotions with their expressions, the why is now more clear. It’s a product of rapid evolution, evidenced by the fact that wolves lack the muscle necessary to make the same infant-like faces.

“I must admit that I was very surprised to see the results myself, because the gross anatomy of muscles is normally very slow to change in evolution,” co-author and Howard University anatomist Rui Diogo, Ph.D., explains. “This happened very fast indeed, in just some dozens of thousands of years.”

The wolf is the domestic dog’s closest living relative, so it makes for a good point of comparison when it comes to understanding how we’ve changed our best friend. So, for this study, the scientists compared the facial anatomy of four wild gray wolves and six domestic dogs, as well as the differences in behavior expressed by nine wolves and 27 shelter dogs.

They discovered that, unlike gray wolves, almost all dogs have a muscle that pulls the lateral corner of their eyelids toward the ears. This muscle, called the levator anguli oculi medialis, is extremely thin — but it’s there. In wolves, there are only “scant muscle fibers,” not an actual muscle. The only species of dog without this muscle, which drives inner eyebrow movement, was the Siberian husky, a more ancient dog breed.

To figure out how dogs make use of this unique eyebrow muscle, the study’s authors exposed them to a human for two minutes and watched what they did. As hypothesized, dogs raised their inner eyebrows more frequently than wolves, and at a higher intensity.

“The findings suggest that expressive eyebrows in dogs may be a result of human unconscious preferences that influenced selection during domestication,” first author and University of Portsmouth researcher Juliane Kaminski, Ph.D., says. “When dogs make the movement, it seems to elicit a strong desire in humans to look after them. This would give dogs, that move their eyebrows more, a selective advantage over others and reinforce the ‘puppy dog eyes’ trait for future generations.”

That advantage underscores Kaminski’s 2014 work with the dogs who were up for adoption — when people see dogs who can move their eyebrows, it ignites a caring response. This is likely because larger eyes give animals a childlike appearance and mimic the facial movements we make when we’re sad.

Not only have humans selectively bred dogs to have these features, but dogs have also learned how to make use of them. In the study, the authors point out that dogs are more skillful in using human communicative cues than even our closest living relative, the chimpanzee. They establish eye contact with us when they can’t solve a problem alone, and they gesture to us when they want something. We might have been the influence behind dogs developing this muscle, but when a pup turns on the sad eyes, it’s we who become manipulated.

Domestication shaped wolves into dogs and transformed both their behavior and their anatomy. Here we show that, in only 33,000 y, domestication transformed the facial muscle anatomy of dogs specifically for facial communication with humans. Based on dissections of dog and wolf heads, we show that the levator anguli oculi medialis, a muscle responsible for raising the inner eyebrow intensely, is uniformly present in dogs but not in wolves. Behavioral data, collected from dogs and wolves, show that dogs produce the eyebrow movement significantly more often and with higher intensity than wolves do, with highest-intensity movements produced exclusively by dogs. Interestingly, this movement increases paedomorphism and resembles an expression that humans produce when sad, so its production in dogs may trigger a nurturing response in humans. We hypothesize that dogs with expressive eyebrows had a selection advantage and that “puppy dog eyes” are the result of selection based on humans’ preferences.