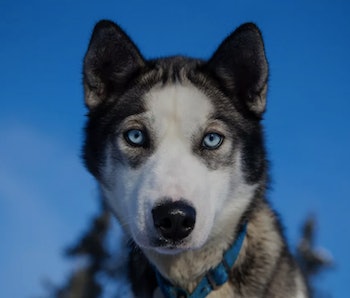 Siberian Huskies are very different than your golden retrievers and miniature schnauzers. Sure, they share a common ancestor — dogs split from wolves about 40,000 years ago — but Huskies, with their sled-pulling and prey-hunting abilities, conjure a certain renegade je ne sais quoi. But perhaps what sets these Arctic boys apart the most from their slobbery peers are their pale blue peepers, the science of which researchers are now beginning to unravel.

Scientists from Cornell University and the dog DNA analysis company Embark Veterinary, Inc. recently banded together to figure out why Siberian Huskies have blue eyes. In a study published Thursday in PLOS Genetics, they reveal that it very likely comes down to a DNA molecule called canine chromosome 18. The team determined that there’s a very strong association between a tandem duplication on canine chromosome 18, which is located near the ALX4 gene, and the development of blue eyes.

“We think that it is a strong functional candidate because it lies upstream of the Homeobox gene ALX4, which has been shown to play a role in eye development and pigmentation in mammals by other researchers,” Embark senior scientist Aaron Sams, Ph.D., tells Inverse. “Our hypothesis, which still needs to be tested, is that this duplication may alter expression of ALX4, which may lead to repression of genes involved in eye pigmentation.”

This study, the first consumer genomics study ever conducted on a non-human animal, involved the genetic data of 6,070 dogs who belong to Embark customers. While it’s been known that some genetic variants lead to blue eyes in species like Australian Shepherds and Dalmations — who sometimes have blue eyes or one blue and one brown eye — those variants are linked to the coloring of the dogs. For example, dogs with a merle pattern (mottled patches of color) or a piebald pattern (a mostly white dog with spots of colors) typically contain these gene variants. However, these variants haven’t been enough to explain why tri-colored Australian Shepherds and Siberian Huskies have blue eyes as well.

“It turns out that [the tri-colored Australian Shepherds and Siberian Huskies] carry the duplication that we have identified,” Sams explains. “So that was a fun mystery to solve!”

This study provides a preliminary look at what Embark can do with consumer dog data. While owners are typically interested in going the 23andMe-style route for dogs to figure out what breeds their mutts’ parents are or examine their pets for genetic health conditions, Sams says Embark’s overall goal is to “end preventable diseases in dogs.”

“The idea is that by providing a direct-to-consumer product that provides owners with useful and interesting information from DNA analyses, we can gather high-quality genotype data in addition to phenotypic and environmental information from dogs and their owners on an unprecedented scale,” Sams says. “With that data we can conduct studies like these to better understand the role of genetics and the environment in the development of diseases in dogs, thereby improving the lives of both dogs and their owners.”

Now that you’ve read that, watch this: