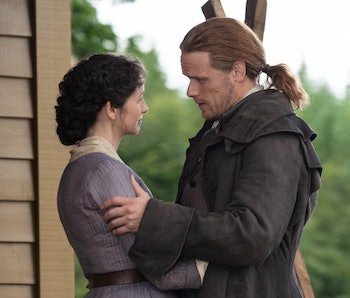 In Season 5’s “Perpetual Adoration,” Outlander took a sharp turn into sketchy and uncertain territory. Jamie has struggled with following through on his mission to find and capture Murtagh Fitzgibbons, doing all he can to postpone or throw a wrench in the questionable cause. However, his choices in episode 5 escalated the situation, with Jamie making a swift and deadly decision that changes the story's trajectory. It was a shocking turn, to say the least, and his actions may have major consequences for the remainder of Outlander Season 5.

“Perpetual Adoration” sees Jamie and his militia arrive at Hillsborough to reunite with Lieutenant Knox and his men. The idea was to combine forces to track down Murtagh, now that Jamie has rounded up enough men. Things take a strange turn after Knox informed Jamie that Governor Tryon had issued a full pardon for the Regulators. All except Murtagh, that is.

Since the pardon rendered the mission obsolete, Knox orders Jamie to return to Fraser’s Ridge, promising to take care of Murtagh on his own. Before leaving, Knox reveals his plans to draw Murtagh out of hiding: the recently acquired prisoner’s list from after the Battle of Culloden in Season 2.

There's one big problem: that list also has Jamie’s name on it.

Long story short, Knox learns Murtagh is Jamie’s godfather and calls him a traitor, threatening to reveal he’d fought in the Battle of Culloden alongside the wanted man. Knowing it was only a matter of time before he was done for, Jamie takes extreme action. Since leaking the information about his past threatens his position, his land, and the safety of his family, Jamie abruptly kills Knox and burns the prison documents. To cover up his actions, Jamie sets fire to Knox’s room so it looks like he died from smoke inhalation.

The twisted turn of events changes everything going forward. While Jamie's motives are clear, the man’s death won’t stop the hunt for Murtagh. After all, Governor Tryon wants to make an example of Jamie’s godfather. If someone were to find out Jamie was involved in Knox’s death or saw him escaping during the fire, Jamie would be labeled a traitor and murderer. He could lose his freedom, Fraser's Ridge, and even his life.

Knox isn’t a character in Diana Gabaldon’s Outlander books. However, he's shaped Jamie's storyline throughout Season 5, calling his loyalty to Murtagh and to Tryon into question. Now that Knox is dead, Jamie’s plans to protect himself and his family could backfire. Killing Knox doesn’t exactly protect Murtagh and it might do the exact opposite, putting him in even more danger.

Whatever the case, the twist further complicates an already grim season and there's no telling what Jamie's future now holds.