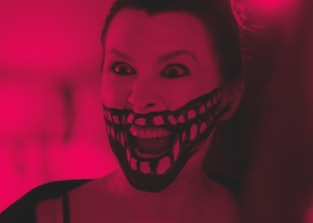 Bored of Netflix? Stream these 10 horror classics for free on Shudder

Things are scary right now, there's no two ways about it. With social isolation becoming the status quo, more people are reaching for comfort watches, but another mindless binge of Parks and Rec isn't everyone's idea of reassurance. For those of you craving something a little more intense for your self-isolation, there's good news. Horror streaming service Shudder has just announced a 30-day free trial if you use the code SHUTIN, just long enough to fill your days from home with some scares that are, thankfully, fictional.

And if you're overwhelmed by Shudder's extensive scary movie library, here are 10 recommendations, broken up into sub-genre categories for easy perusal.

Before The Favourite or The Lobster, there was Dogtooth. Greek director Yorgos Lanthimos helmed this 2009 film, which combines surreality and cabin fever with dark results. Dogtooth follows three young adults basically held prisoner in their own home by their parents, who instruct them they cannot leave "until the dogtooth falls out."

However, the innocent can't stay innocent forever. Lanthimos' distinct, stark imagery complements the matter-of-factness of the film, but beware: It's just as blunt about sexuality, so keep that in mind.

Park Chan-Wook is the master of Korean horror, and this is his masterpiece. With Bong Joon-Ho sweeping the Oscars with Parasite, now's the time to get into K-cinema, and there's no better place to start than Oldboy. Choi Min-sik stars as Oh Dae-su, who finds himself imprisoned in a hotel room for 15 years and then is suddenly released, only to find himself embroiled in a conspiracy when he tries to get revenge. If you enjoy this, check out the other parts of Park's "Vengeance Trilogy," Sympathy for Mr. Vengeance and Lady Vengeance, also available on Shudder.

Creative takes on the cat and mouse film.

Imagine if Home Alone and Die Hard and Rambo all combined into one movie. That's Deadly Games, released in France as Pére Noël Code 3615 in 1989, a whole year before Home Alone. Thomas, a bespectacled, bemulleted child tries to defend his house and his elderly grandfather from a disgruntled mall Santa using all sorts of complex traps and makeshift weapons. Joyeux Noël, toi sale animal.

Teenagers locked in a mall overnight and lethal security robots — what could go wrong? While Chopping Mall (also released as Killbots) is not exactly an arthouse masterpiece, its schlocky charm goes a long way with bad laser effects, a barely-there plot, and yes, a head explosion scene that will make you cheer. Whatever you want in a slasher flick, this has it, plus robots.

Where it all started. George Romero's Night of the Living Dead shaped a genre, creating a mold that would inform midnight movies for generations, and it's still looked upon as a holy text by horror directors today.

Not only does Night of the Living Dead stand as the archetype for all zombie movies, but it also has a Black actor in the lead role and confronts the unfortunately still relevant topic of racism in its final moments.

If you're not looking for "so bad it's good cinema," try this "so good it's good" one instead. Shudder has the 2016 remaster of this 1979 classic, a terrifying indie movie whose success speaks for itself. With an estimated $300,000 budget, it grossed about $12 million at the box office. Not too shabby.

Some creepy flicks you may have missed in the past few years.

Yep, that's right, it's Nicolas Cage, and he is at his Cage-iest in this visionary film by Panos Cosmatos. It doesn't take itself too seriously and it has some of the best use of color I've ever seen on film, but beware, this movie is a little style-over-substance.

However, between the passionate performance of Cage, the gorgeous neon lighting and shot composition, and the haunting score by Jóhann Jóhannsson (his last ever film due to his tragic death), you'll find yourself immersed in the experience and allow the plot to take a back seat.

This Japanese horror-comedy is one of those movies that is best left unspoiled. Seriously, even the trailer warns you're best going into this blind. Just know it's a hilarious meta comedy with a 37-minute-long first act all shot in one long cut, Birdman and 1917 style. It's a love letter to filmmaking. It's a testament to low-budget movies. It's a great watch for any horror movie buff.

A Girl Walks Home Alone at Night, Ana Lily Amirpour's directorial debut, is not only a great horror movie, it's also one of the best genre movies of the decade. Decadently shot and dripping with style, it follows an unnamed Girl as she skateboards around a fictionalized Iranian city known as "Bad City." The hitch? She's a vampire. Like Twilight if Twilight subverted every single cliché, this film will surely be looked back on as a classic.

Black Mirror: Bandersnatch's Alice Lowe wrote, directed, and starred in this 2017 horror-comedy, which filmed in under two weeks while she was eight months pregnant. Quite the feat, and the result is just as impressive.

Prevenge follows Ruth, a grieving widow who must prepare for the birth of her child, but her fetus demands she get revenge on those responsible. While reflecting on grief, motherhood, and pregnancy, it still manages to be hilarious. Look out for Gemma Whelan, known for playing Yara Greyjoy in Game of Thrones, as a fitness guru and murder victim.