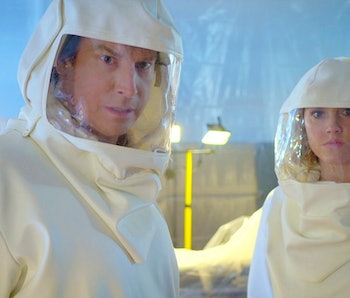 With the CDC recommending social distancing to prevent the spread of the COVID-19 coronavirus, now is the time to truly embrace the binge watch. However, you may want to think twice before renting Contagion on Amazon. While it may be marginally topical, it could cause undue panic or feed into anxiety already spurred on by the onslaught of information in our day-to-day lives.

Instead, consider these eight soothing (and diverting) TV episodes and movies to keep it mellow while you're laying low at home over the coming days. Whether it's comedy, documentary, or drama you're looking for, we've got you covered, across a variety of streaming platforms.

A crime procedural about math isn't the first show that springs to mind when you think of pandemics, but the third-ever episode used vector models to predict the spread of the Spanish Flu. In its examination of a real-life virus that killed millions in 1918, Numb3rs goes out of its way to show the complex infrastructure involved in epidemics.

A meningitis outbreak hits a dive meet, and the entire crowd at the pool piles into Princeton-Plainsboro Teaching Hospital to be tested for symptoms. Between filtering the 2500 attendees for any signs of the illness, Dr. House fixates on a 12-year-old diver who shows symptoms, but not ones that exactly line up with meningitis. Watching the systematic sorting and effective treatment of those exposed to the virus is a good reminder that there are public health systems in check.

Watch for: a mini The Dead Poets Society reunion as two of its stars, Sean Patrick Leonard and Dylan Kussman, appear in the episode.

This six-part docuseries can only be described as "eerily timed." It takes its viewers on a journey from the last flu epidemic (the one from that episode of Numb3rs) that hit in 1918, all the way to the minor outbreaks of swine flu and bird flu in recent years. Then it looks forward as to what the next pandemic could possibly be. (Looks like we have the answer to that question.)

It sounds scary, but it's comforting to see actual people looking for workable solutions that could eliminate influenza for good.

Watch for: Jake Glanville and Sarah Ives, trying to get funding for their one-shot flu vaccine.

A documentary on the 1918 Spanish Flu pandemic seems like the last thing you'd want to watch when you're anxious about the coronavirus The key here is perspective: that was over 100 years ago, medicine has advanced leaps and bounds since then, so we surely will survive this.

Keep this in mind when people say COVID-19 is "just a flu." The Spanish flu was just a flu as well. Don't minimize the risk, but don't panic either.

Watch for: interviews with actual survivors, quite the feat for a documentary made in 2010.

A spinoff of Adult Swim series Childrens Hospital, Medical Police follows two doctors from the Dr. Arthur Childrens Hospital as they get roped into a bioterrorism conspiracy, one that leads to TV talent competitions, skydiving, and waterslides. While it is about a very serious topic, the show is so saturated with silliness and absurdity there's no way it won't soothe your anxieties over its brief 10 episode run.

You may think Medical Police is a cult show, but compared to Garth Marenghi's Darkplace it's downright mainstream. This 2004 British meta-satire of 1980s medical procedures includes "retrospective interviews" with the cast, allowing for hilarious commentary. The show only ran for six episodes, but luckily episode 4 is everything silly about pandemic episodes on television: the cluelessness, the weird symptoms, and the hastily wrapped-up ending.

Watch for: some instant-classic one-liners, like "I know writers who use subtext, and they're all cowards" and "She was like a candle in the wind: unreliable."

The Decameron is the original pandemic entertainment. Written by 14th-century author Giovanni Boccaccio, it tells the story of 10 people quarantined during the Black Death epidemic, and the stories they tell each other to entertain themselves. The original novel contained 100 tales, usually involving sex, slapstick, life lessons, and farce. Italian filmmaker Pier Paolo Pasolini adapted a handful of them for the screen in this 1971 film.

Watch for: Pasolini himself appearing as the painter Giotto, linking the stories together.

Available on The Criterion Channel.

For those looking for a more accessible, contemporary take on Boccaccio's, The Little Hours is a 2017 take on a handful of stories from The Decameron, but beware: it's just as raunchy as the book intended.

Though it appears to be a period film about nuns, the rampant cursing, sex, nudity, witchcraft, and general immorality earned it a condemnation from The Catholic League. If you're going to entertain yourself during a pandemic, though, this modern retelling of a 700-year-old plague story should surely distract you.

Watch for: Alison Brie acting opposite her real-life husband Dave Franco, and Nick Offerman in a fetching bob.