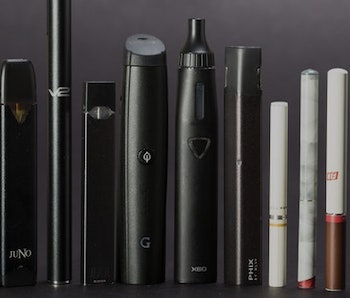 Welcome to Inverse Daily! I’m glad to have you here. So glad that I almost forgot about the monstrosity that is a Cheez-It Pizza Pocket. Leave pizza alone!

Today, we’ve got a beautiful mix of cosmic discoveries, wellness fact checks, and uh, checks notes, DIY vaping — so have fun and I’ll meet you down below.

Don’t forget: Our Women of Science Tarot Deck giveaway is open for the rest of this week. Enter to win here.

“That’s the dream: breathable, livable cities for everyone, and right now.”

There’s a lot going on in the world of vaping. Just this Monday New York Governor Andrew Cuomo announced an emergency order to ban flavored vape juices. Meanwhile, a week ago, the FDA revealed that President Donald Trump gave the agency the go to take flavored vaping products off the market. Michigan kicked it all off in September, when it became the first state to ban flavors completely.

But here’s the thing about the move to get rid of flavors: People will just mix up some vape juice themselves.

Sources from inside the thriving online community of DIY vape juice tell Emma Betuel that a “doomsday prepper” movement is growing as we inch closer to a vape flavorless world. One individual told Emma that they’ve “already bought several year’s worth of supplies, including the hardware, totaling about $300.” They say it’s a “small investment, but hopefully enough to ride out the storm.”

This community of DIYers try to look out for each other and point out what kinds of flavors are safe to inhale, but appear to share the same blindspot with e-cigarette companies. There’s a huge lack of research showing whether or not it’s safe to inhale certain food additives, while at least three flavoring chemicals are known to be toxic. Without guidelines, DIYers are left alone to trial and error, and whatever might emerge from that.

Head to Inverse to find out more.

Essential oils have been around for thousands of years. You’ve probably tried them out, whether it was by inhaling, rubbing, or ingestion. Often, whether it’s on Instagram or in a health food store, they’re touted as cure-alls — from autism to cancer, to ADHD and acne.

But Alexandra Pattillo reports that, despite countless testimonials backing up their health effects, there’s not enough science to support any of these claims. Furthermore, the FDA doesn’t regulate them as drugs so, technically, any medical claim is unlawful.

So if research is still catching up to the fad, what does that mean for potential users? Experts say there’s no need to toss out your oils just yet — there is some reason to believe essential oils can help out with things like anxiety, stress, and poor sleep. But when it comes to larger claims, it’s good to be cautious in choosing a high quality oil, do your research on risks, and maybe check with a doctor first.

On Friday, the iPhone 11 will finally be released into the hands of, presumably, people stoked to take glossy portrait-mode photos of their pets. The question for the rest of us is: Is it worth joining the masses and throwing down that cash?

An underlying theme among many reviews of Apple’s $699 phone is it might not be worth upgrading if your current iPhone works fine. In previous years, a new annual launch would mean groundbreaking features like way better graphics, the ability to record video, or a front-facing camera to call people.

Still, by all accounts, the new iPhone is pretty cool. It’s $50 cheaper than the iPhone XR it replaces, it has a new wide-angle camera, its A13 Bionic chip is faster than ever, and the battery lasts even longer. On the other hand, the A12 Bionic was already pretty speedy, the features in iOS 13 will come to older phones, and it retains the same 6.1-inch LCD screen as its predecessor.

As consumers hold onto their phones for longer and smartphones continue to offer the same basic features, a big question remains: With a 5G-enabled iPhone expected to launch next year, and an iOS launch that works on phones up to five years old, do buyers really need to make the jump to a new phone now?

Find out if the iPhone 11 is the right choice for you.

The toll of a troll

On Monday, world leaders will gather in New York City for the United Nations’ Climate Action Summit. They’re expected to explain exactly how their nations will reduce greenhouse gas emissions and contribute to a sustainable world. It’s a very big deal, so naturally it’s getting trolled.

According to a Twitter-bot tracking platform called Bot Sentinel, there was a major surge in bots tweeting about climate change two weeks ago after CNN’s climate town hall, and there’s been continued activity ever since. Sometimes these bots pose as conservatives and other times liberals, but one thing remains the same: They spew climate science denial.

And once these bots trick their way into getting enough followers, their creators are able to manipulate conversations by spreading false information and intimidating useful discussion. As Thor Benson points out, you’re less likely to publicly discuss climate change science if you’ll be automatically attacked by accounts when you do. Prior to the summit, a number of organizations are pushing to have the climate crisis at the forefront of the conversation. It remains to be seen how many of those conversations are botched by bots.

Learn about the connection between these bots here..

A small drop into Jupiter

Last month an amatuer astronomer named Ethan Chappel was peering through a telescope in his backyard when he caught a flash of something spectacular. As Chappel looked towards Jupiter he saw, on the lower, left side of the planet, a flash of light that lasted for precisely 1.5 seconds. Now, after analysis, the culprit behind the light has been revealed: a small, stony meteor that crashed right into the fifth planet from the sun.

Luckily for the world of astronomy, Chappel captured the whole thing on video. He examined the footage with an open source software called DeTeCt and some professional astronomers joined in the analysis. Ultimately, the team determined that the meteor was likely 12 to 16 meters in diameter and weighed 450 tons in mass. That’s small in the comic sense — but to ignite a light bright enough to be seen from Texas, it still released the amount of energy equivalent to an explosion of 240 kilotons of TNT.

Click here to see what happens when Jupiter gets hit.

Today, that’s the news that a drug historically used to treat an enlarged prostate could also be used to slow the progression of Parkinson’s disease, which existing treatments can’t do.

Thanks for reading, everyone!

As we move closer to Friday’s climate strike, I’m curious to know what you think: What do you think could be done better to mitigate the climate crisis? What do you want to see from your leaders? Let me know over at sarah.sloat@inverse.com.

In the meantime, I’ll be thinking about that time Inverse learned how gross the ISS is.