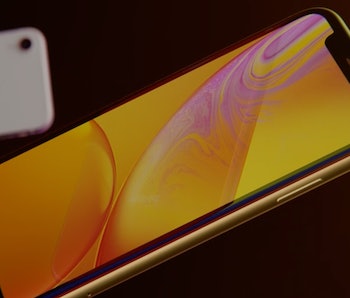 The iPhone XR reviews hit the web on Tuesday. and they’re overwhelmingly positive. Apple’s cheapest smartphone launch of this year went on pre-order last Friday, and reviewers are now getting to grips with the phone that costs $250 less than the iPhone XS. Pundits praised the high value for money, despite the lower quality screen and some missing features, declaring it a worthy upgrade for people in the market for a new iPhone.

“The iPhone XR is the iPhone for everyone,” Raymond Wong wrote in his review for Mashable, where he described it as “the Goldilocks of iPhones.” “It’s every bit as powerful as the iPhone XS and XS Max. The cameras take stunning photos. It comes in six vibrant colors. And it starts at $749, which is less than a Google Pixel 3 and not much more than a Samsung Galaxy S9.”

One of the major changes from the iPhone X is the removal of the second telephoto lens. The iPhone XR has the same wide angle lens as the XS with a very big f/1.8 aperture, and it uses advanced artificial intelligence to offer Portrait Mode with just one lens. Compared to the Google Pixel 3, however, Nilay Patel questioned features like Smart HDR in his The Verge review, as they tend to make scenes look unrealistic.

“Overall, I think most people who are in the market for an iPhone XR will be happy with its camera,” Patel wrote, in his review where he described the XR as a “no-brainer upgrade.” “It’s a significant update from previous iPhone cameras, and, like the XS, it makes the iPhone X look downright bad. But the Pixel 3 still produces winners more consistently, and I prefer the more contrasty, natural look of its photos. And I’d much rather have the Pixel 3’s wide-angle selfie lens than the telephoto lens on the XS. We’ll have to see if Apple’s aggressively flattened photos take over Instagram and push everyone else to change their looks.”

“After living with the iPhone XR for a week, I can safely say that most people (which might not include those of you reading Engadget) simply will not care about the dip in resolution,” Chriz Velazco wrote in his Engadget review. “It’s true that you can see some individual pixels if you press your nose right up against the glass. It’s also true that you can easily spot the difference between the XR and XS displays when zooming in on photos. In typical, everyday use, though, the difference is negligible. Yes, you can tell it’s different from a premium Apple display, and yes, it would’ve been nice if Apple just went with the industry standard 1080p. Even so, I’ve found this display to be good enough. And I seriously doubt the average person upgrading from an older iPhone will find much to complain about. Colors are bright and vivid, and viewing angles are still excellent.”

The display also drops the OLED technology found on the iPhone X and the subsequent XS and XS Max. This means blacks are less deep, as the screen can’t switch off individual pixels. LCD also requires a backlight, which makes the bezel thicker. Brian Chen, in his review for the New York Times, wrote that LCD “looks ever so slightly inferior to the OLED screens on the XS phones — but you would need to be a movie buff to notice the difference.”

“While the iPhone XR’s display is quite nice, it’s no OLED,” Lauren Goode wrote in her Wired review. “OLED is the pool of water you just can’t help but dip your toe into, approximately 80 times a day, or however many times a day you check your phone. On second thought, maybe LCD is not such a bad thing.”

The screen also drops 3D Touch, the pressure-sensitive display introduced with the iPhone 6S. The XR instead offers something called “Haptic Touch,” which essentially replaces the hard presses with long presses to complete most of the same tasks. Instead of hard pressing on the keyboard to move the cursor, for example, XR users instead long press on the spacebar. Mark Spoonauer wrote in his Tom’s Guide review that “I don’t think most iPhone owners will notice the difference between Haptic Touch and 3D Touch.”

The display, however, is surprisingly large compared to previous devices. The phone technically has a bigger screen diagonally than the iPhone 8 Plus, despite coming in a smaller package. Alex Cranz noted that in his Gizmodo review.

Overall, the phone’s price of $250 less than the iPhone XS swayed a lot of reviewers in their judgments. In his review for CNBC, Todd Haselton reasoned that most people simply won’t notice the missing features.

“I think the iPhone XR is the iPhone that most people should buy,” Jaselton wrote. “It gives you the best bang for your buck. I expect this to be a really big-seller for Apple, since it’s more affordable than the iPhone XS but with a lot of the same features.”