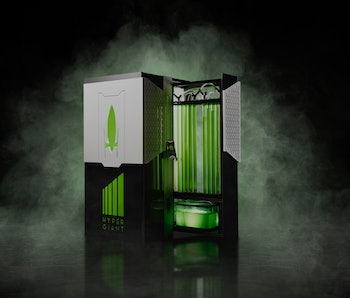 Algae could play a surprising role in the fight against climate change.

On Tuesday, A.I.-focused technology firm Hypergiant Industries announced a machine that uses the aquatic organisms to sequester carbon dioxide. Algae, the company claims, is “one of nature’s most efficient machines.” By pairing it with a machine learning system, its developers hope to make these talents even more effective.

That’s not all. The team claims the device, which measures three feet on each side and seven feet tall, can sequester as much carbon as a whole acre of trees — estimated somewhere around two tons.

“We’ve been thinking about climate change solutions in only a very narrow scope,” Ben Lamm, CEO of the Austin-based firm, tells Inverse. “Trees are part of the solution but there are so many other biological solutions that are useful. Algae is much more effective than trees at reducing carbon in the atmosphere, and can be used to create carbon negative fuels, plastics, textiles, food, fertilizer and much more.”

It’s not the only ambitious idea in the works at the six-division Hypergiant Industries. Its Galactic division is aiming to build a multi-planetary internet by using satellites as relays. Last month, it took the wraps off a prototype Iron Man-like helmet that could aid search and rescue teams. The company, founded last year, counts Bill Nye and astronaut Andy Allen among its advisory board members.

Hypergiant’s algae-powered bioreactor is the sort of idea that could be needed now more than ever. Despite a push to greener technologies, global annual carbon emissions rose in 2018 to hit an all-time high of 37.1 billion tonnes. That’s after two years of a relative plateau between 2014 and 2016. This has resulted in a global climate shift, where 2018 was the fourth-hottest year on record. Several countries, including the United Kingdom, have pledged to reach net-zero emissions by 2050.

Research has shown that restoring forests by an area the size of the United States could cut carbon dioxide in the atmosphere by a staggering 25 percent, reaching levels not seen for a century. While planting trees could play an important role in the pushback, alternative solutions like carbon capture and storage and new sequestering technologies could also help remove carbon from the atmosphere.

“One Eos Bioreactor sequesters the same amount of carbon from the atmosphere as an entire acre of trees,” Lamm says. “With enough Eos devices, we could make whole cities carbon-neutral or even negative, and at a rate that is so much faster than that of trees. That’s the dream: breathable, livable cities for everyone and right now.”

When the algae consumes carbon dioxide, it produces biomass. The company has suggested that this biomass could be used in a number of applications, like making oils or cosmetics. A smart city could take the biomass and use it for fuels. The machine is small enough to fit inside office buildings, and Lamm tells FastCompany that the initial prototype it’s currently operating can attach to a building’s HVAC system to clean the air inside.

From here, Hypergiant Industries plans to hand out the blueprints for the machines to hobbyist communities. The hope is that others will use the designs to make similar, smaller machines for residential units. The company plans to reveal details about how it will bring the product to market next year.

Hypergiant is not the only group looking into the sequestration process. Rob Mackenzie, professor of atmospheric science at the University of Birmingham, helped build an outdoor laboratory in 2017 to see how trees would respond to higher levels of carbon dioxide, like those expected in the future. The mature oak trees are circled with 80 feet masts that pump gas in the direction of the trees. In August, Mackenzie told the Reasons to be Cheerful podcast that in the first three seasons, the trees are in fact able to draw down extra carbon dioxide when offered.

While renewable energy and electrifying transport could help reduce emissions, trees and other techniques could also help maintain manageable levels of carbon in the air.

More like this
Innovation
Jan. 16, 2023
An ambitious plan could help repair one of California’s biggest ecological catastrophes
By The Conversation, Robert Glennon and Brent Haddad
Science
Jan. 24, 2023
The Doomsday Clock is now at 90 seconds to midnight — here's what that means
By Kiona Smith
Science
Jan. 23, 2023
Elephants could be key to saving the planet — here’s why
By Tara Yarlagadda
LEARN SOMETHING NEW EVERY DAY.
Related Tags
Share: