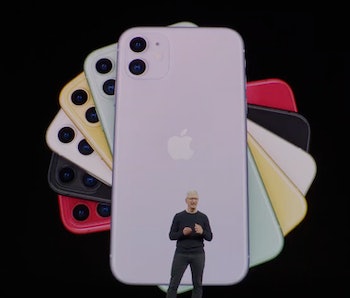 Good morning, everyone! I’m Sarah, and this is Inverse Daily.

Today also happens to be the second day of “palindrome week.” Until September 19, every date reads the same forward or backward. It’s the last palindrome week of the century, so get your kicks indulging in this fun fact while you can.

“It’s deeper than any level of relaxation you’ve ever experienced. And yet, your mind is awake inside and you’re not asleep.”

On Tuesday, the iPhone 11 made its much-anticipated debut — and we got to see which rumors were true and which were just hype.

The successor to the iPhone XR launched with a lower price at $699 and a new dual-camera setup. The iPhone 11 Pro and Pro Max also debuted as successors to the XS and XS Max. All three feature the new A13 chip, a U1 ultra wideband chip for indoor location, wifi 6, and even faster gigabit LTE.

The Apple Watch also got an update to the Series 5, with an always-on display that, for the first time, lets users look at the time without moving their wrist. Apple TV+ and Apple Arcade also got new release information, both priced at $4.99 per month. The watchOS 6, iOS 13, and macOS Catalina also got updates on their release dates.

Still, there were some curious omissions from the lineup. Bidirectional wireless charging didn’t make the iPhone 11, the Mac didn’t get a mention, and there was no sign of a tile tracker device. Eh, there’s always next year.

Learn more about your next big purchase here.

Take a stroll through your nearest health food store or pharmacy and you might find yourself lost in a sea of supplements. Whether it’s Ginkgo biloba for improving brain health or collagen for reducing wrinkles, supplements advertised as brain and body boosters have been embraced by the masses. The problem? There’s mixed evidence that any supplement actually works better than a little something called healthy eating.

However, new research has shined a light on the murky world of supplements and vitamins. This exhaustive analysis, the largest of its kind, found that while the majority of nutritional supplements don’t significantly improve mental health, some can serve as beneficial additional treatments for some mental disorders.

Find out more about the expanding world of supplement science.

Mounting evidence shows that eating meat contributes to the climate crisis, and the production of lab-grown meat isn’t much better for the planet, either. The good news is that eating plant-based “meat” could be a step towards a more sustainable future — and one where meat-lovers can still indulge in the flavors they crave.

If you’re among the one in three Americans who eat fast food on any given day but want to make the switch to faux meat, there’s good news. From Burger King to Kentucky Fried Chicken, fast food companies are beginning to include plant-based “meat” in their offerings. They’re not necessarily healthy options, but they are kinder on the planet.

For our fast-food lovers’ guide to plant-based eating, click over here.

On September 15, 2017, the Cassini space probe deliberately plunged into Saturn’s atmosphere — a dramatic finale for a nearly two-decade-long, game-changing mission. During its time exploring Saturn and its system, Cassini collected heaps of information, much of it waiting to be analyzed. On Monday, scientists announced in Nature the newest discovery brought to us by Cassini: Titan’s moons had an explosive birth, literally.

Titan is Saturn’s largest moon, and its polar lakes are filled with flammable greenhouse gases. Until recently, scientists thought these lakes of doom (their average temperature is a casual -290 degrees Fahrenheit) formed when methane melted the moon’s bedrock of water ice.

However, radar imagery gathered by Cassini led that hypothesis to be nixed and a new argument to emerge. The scientists propose warming temperatures on Titan caused nitrogen stored beneath its surface to explode, which in turn created craters that filled up with liquid gas. This means that what we’ve been calling “lakes” are actually more like “explosion craters.”

Learn why you won’t be swimming in Titan’s lakes during your space vacation.

Today, that’s Ireland’s plan to plant 440 million trees by 2040. The ambitious project was announced as part of the nation’s “climate action plan” and means a significant shift in the use of farming land in Ireland.

Thanks for reading, everyone! I’d also like to give a special shout-out to everyone who sent me their thoughtful takes on transcendental meditation. Nicole C. described TM as something that’s “not a big investment” but still provides “a lot of reward” while Michele M. explained that TM has kept her calm and grounded for the past 30 years. DeeDee D. reminded me that “not all meditation systems are equal,” but many forms “have the ability to change a person.”

Many others wrote in to similarly express their positive experience with different types of meditation — thank you! It’s always wonderful to hear about the first-person experiences that connect to our science reporting. Inverse Daily will be back tomorrow with more of that.

Until then, I’ll be thinking about that time Inverse learned why our faces evolved to look like butts.