What is Ted Lasso’s greatest gift? 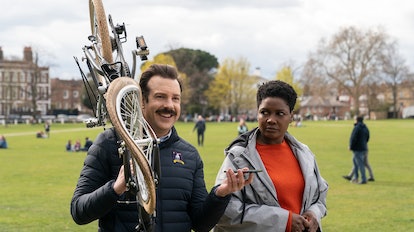 October is the best month of the year and I’ll hear no arguments against it at this time.

I’m Nick Lucchesi, and this is Inverse Daily. We’ve got four stories in this Monday edition — including an exploration of the Ted Lasso effect — that hopefully make you a little smarter about your world. Thanks for being with us.

This is an adapted version of the Inverse Daily newsletter for Monday, October 4, 2021. Subscribe for free and earn rewards for reading every day in your inbox. ✉️

Ted Lasso’s greatest gift comes off the pitch — Katie MacBride speaks to psychologists about the possible impact of Ted Lasso on the perception of therapy:

Mental health representation on TV isn’t always great. There are ridiculously quick fixes, sensationalized symptoms, and a general focus on drama (or comedy) over realism. While Dani Rojas was able to overcome the yips with one session, Ted is poised to be a much more complex —and realistic — case.

As Ted Lasso Season 2 nears its finale, two mental health professionals share their thoughts on the show’s portrayal of mental health struggles, treatment, and why it matters that one of the biggest shows of 2021 isn’t afraid to tackle those issues head-on.

Orbit Fab will put the first satellite “gas station” into geostationary orbit sometime in 2022 or 2023.

The American company announced that its satellite, called Tanker-002, will be hitching a ride on a SpaceX Falcon 9 rocket, before utilizing a curious trajectory around the dark side of the Moon to achieve a rarified orbit of more than 22,000 miles away.

Going around the back of the Moon is a nontraditional means of entering Geostationary orbit, which is defined by an altitude of 22,236 miles and matches the rotation of the Earth at just less than 2 miles per second. This results in the satellite remaining essentially motionless relative to a spot on the equator.

Two vitamins may treat an incurable brain disease — Claire Cameron reports on a study in the journal Science Translational Medicine, where researchers lay out the evidence for thiamine and biotin supplementation as a treatment for Huntington's disease:

Your thirties are supposed to be the time of your life.

It is also the stage of life most of us start to think about The Future, and in particular, our body and brain’s long-term health. But for people with a family history of Huntington’s disease, a severe and incurable form of neurodegeneration, there’s a glimpse at what the rest of their life might hold.

Huntington’s isn’t typical dementia. The early symptoms tend to manifest in a person’s thirties and forties, but they can begin even earlier.

Why Squid Game is so popular — Dais Johnston examines the Korean dystopian drama, which has gone from a little-known Netflix drop to a series rivaling Bridgerton:

Netflix is the definition of “spoiled for choice.” With countless titles and more added all the time, it’s a challenge to stand out amidst the masses of movies and tv shows available.

So how did Squid Game, a Korean series about a deadly series of childhood games, go from relative obscurity two weeks ago to become Netflix’s most popular series ever? The answer is a lot more complicated than you may think, spanning years and multiple countries.

More like this
Mind and Body
7.3.2022 1:30 PM
Why one unappealing emotion can make you happier in the long run
By Sarah Sloat
Mind and Body
6.27.2022 10:30 AM
What’s the best way to wash your face? Dermatologists explain the science of clean skin
By Katie MacBride
Science
6.28.2022 2:00 PM
Scientists think gut probiotics might help treat depression
By Steph Lee
Related Tags
Share: