Scientists reveal the true danger of eating too many carrots

“An orange tint to the skin isn't necessarily bad.” 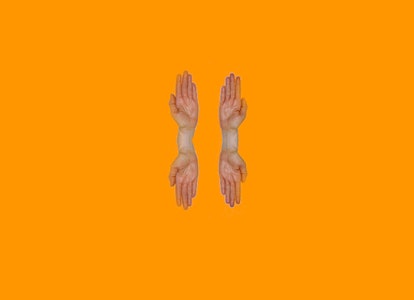 Our story begins with an iconic piece of television history: the day Arnold Perlstein turned orange.

It was October 18th, 1997 when The Magic Schoolbus episode “Goes Celluar” told wide-eyed millennial children that eating one too many orange snacks could make you look like a pumpkin.

With a myriad of orange foods readily available at the grocery store — ranging from orange cheese puffs to baby carrots — this threat can seem ever-present. Perlstein, for his part, turns orange from a snack that doesn’t even exist: Sea Wheedies.

If you thought turning orange from food was just a plot point in a fantastical children’s show, hold on to your seat. Scientists say it can actually happen.

Chu Hsiao is an MD-PhD candidate at the University of Florida who studies how a person’s life experiences can influence their genetic susceptibility to disease. She tells Inverse that while eating too many orange foods might not turn you a bright hue like Perlstein, they can have a shocking effect on your skin’s pigment.

Even more, it may be evidence of a worrying dietary habit.

Can eating too many carrots make your skin turn orange?

This condition might seem like something made up for a kids' show, but it’s very much real.

First identified in 1919, this orange-hued transformation is called carotenemia and can occur when humans ingest a large amount of food containing beta-carotene. Beta-carotene is a naturally occurring pigment responsible for the orange, yellow, and even red hues of different foods, including carrots, sweet potatoes, and pumpkin.

If eaten in moderation, beta-carotene can be an important source of vitamin A, which promotes healthy skin and eyes.

However, if beta-carotene-rich foods are eaten in excess the extra can make its way into our bloodstream, explains researchers from UC Santa Barbara.

You’re not likely to turn as orange as Arnold Perlstein did.

While it won’t turn our blood the color orange, this pigment will begin to deposit in thicker parts of our skin, like the heels of our feet or the palms of our hands.

“When skin is thicker, there are more layers,” Hsiao says.

Now read this: Biologists debunk an 80-year-old myth about carrots

This condition is most common in babies whose first solid foods might primarily consist of pureed carrots or squash but adults can also experience carotenemia. In adults, the pigment may be especially vibrant if you also have conditions like hypothyroidism that reduce your body's ability to process beta-carotene.

It’s also important to note that, like unfortunately much of medical research, these standard depictions of carotenemia are based on observations of white skin. This means that someone with darker skin may experience carotenemia differently, including seeing less vibrant orange pigment in their skin.

How many carrots does it take to turn orange?

According to a Cleveland Clinic article, dermatologist Melissa Piliang says that regularly eating between 20 to 50 milligrams of beta-carotene per day for several weeks could be enough to turn you orange. This is equivalent to between three and ten carrots a day.

“One medium carrot has about 4 milligrams of beta-carotene in it,” Piliang writes. “So if you’re eating 10 carrots a day for a few weeks you could develop it.”

There are also instances recorded in medical journals of people eating much more, Hsiao says.

For example, in a 2012 case study subtitled “Carrot man,” researchers describe a 48-year-old man who complained to his doctor of abdominal pain after ingesting 6 to 7 pounds of carrots per week as an attempt to lose weight. In addition to carotenemia, the man also experienced constipation and possibly vitamin A toxicity.

Examples of carotenemia on hands

Hsiao says it is also important to remember that it’s not only orange foods like carrots that can induce carotenemia — despite its name.

“It's not so direct as thinking ‘I ate something orange, I’ll turn orange,’” Hsiao explains. “Beta-carotene can be found in even leafy green vegetables.”

However, that doesn’t mean that orange skin is a symptom you should totally overlook.

One thing to consider if you see your skin turning orange or yellow is whether or not you actually have been increasing your beta-carotene intake. If you’ve been eating these orange foods in moderation, then this new skin pigment could be from a less benign source, such as jaundice or liver disorders. If you suspect that one of these conditions may be the true culprit, it’s important to consult your doctor.

Likewise, while excess beta-carotene itself may not be dangerous, Piliang says that it could be evidence of an overly restrictive diet. Cutting out major food groups or feeling fearful of eating foods other than orange vegetables could be signs of an eating disorder like anorexia or orthorexia.

While orange vegetables are a great source of fiber and nutrients, they are only part of a fully balanced and nourishing diet.

How to reverse carotenemia

Instead, the simplest way to clear up your skin's pigment is to reduce the amount of beta-carotene you consume. The pigment may not disappear overnight, but as you diversify your diet again it will slowly fade away over a few weeks.

But depending on which scientists you ask, an orange or yellow-hued glow from eating more vegetables might not be a bad thing — to a certain extent. Hsiao brings up a 2012 paper that simulated the effect of extra vegetable servings on people of different races and skin tones. Researchers found that a “golden” glow from the extra vegetables was actually seen as more attractive.

Now read this: Is reheating coffee bad for you? A scientist reveals the pros and cons

More like this
Mind and Body
6.25.2022 3:00 PM
What makes eggs organic? A USDA expert cracks open the complicated answer
By Elana Spivack
Mind and Body
6.15.2022 7:51 PM
A single gene could stump a deadly parasitic infection
By Allison Parshall
Science
6.23.2022 6:44 PM
Scientists discovered the biggest bacteria ever, and it’s the size of an eyelash
By Allison Parshall
Related Tags
Share: