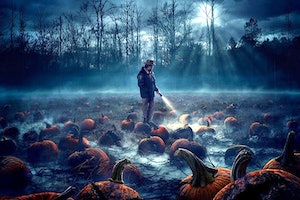 Are you ready for Netflix & Chills 2021 this October? Netflix is once again asking you to snuggle up indoors to stream all sorts of spooky TV shows and movies, both new and old. Witches and ghouls are fun and all, but what about spooky science fiction?

September brought us action-packed movies like Kate and Green Lantern, including the epic return of the Jaws movies. But now is the time for even more fear, which means vampires count as science fiction this month. In addition to vampires, we’ve got zombies, androids, demons, aliens, and giant naked monster people that eat regular-sized people (don’t worry, that last one’s in an anime).

If you’re hankering for a taste of tomorrow — or thirsty for sci-fi horror — consider streaming these 11 shows and movies... if you dare. As always, we pay special attention to what’s new, original, or leaving Netflix soon. This time around, however, we’ll lean into whatever feels right for the season.

Sci-fi movies on Netflix in October 2021

Remember that movie Collateral from 2004 where Tom Cruise plays an assassin who hires Jamie Foxx’s character to drive him around LA one night in a taxi? Netflix’s toothy new horror movie puts a titillating and vampiric twist on that premise. In Night Teeth, a supposedly “quirky” college student named Benny moonlights as a chauffeur and drives two mysterious women to various parties in Los Angeles. But there’s a catch.

You guessed it: Those two women are vampires — and so are Megan Fox and Sydney Sweeney! Benny is thrust into a covert conflict between competing vampire covens who like to party, but there are also protectors of the human world thrown into the mix as well. Night Teeth won’t be out until later in the month, and while it’s technically contemporary vampire horror, the vibes are enough to warrant its place on this list.

Unlike so many hulking bruisers in Hollywood, Dave Bautista is effortlessly charismatic, whether he’s playing Drax in the Marvel Cinematic Universe or gunning down zombies in Sin City.

Davey B. stars in Army of the Dead, a Zack Snyder film that hit Netflix back in May. It’s a high octane Ocean’s 11 with big guns, bigger personalities, and the biggest horde of zombies you’ve ever seen. Las Vegas has fallen and remains quarantined following an outbreak. Dave Bautista's Scott Ward leads a group of mercenaries on a mission to reclaim a bunch of money for one of the casino bosses. If they can survive, they might become rich.

Army of the Dead is ambitious, long (148 minutes), and totally worth it for a bombastic and brainless good time. If you haven’t seen this one yet and you like zombies, then October is the time to do it. (As an added bonus, a prequel film called Army of Thieves hits Netflix on October 29.)

Like so many anime, Violet Evergarden fuses several genres. The end result is a stunning and startling piece of steampunk science fiction about a young woman struggling to gain a sense of autonomy. The titular heroine had been an obedient weapon, but once the fight was over, she became an “Auto Memory Doll,” which is essentially a ghostwriter.

Yeah, it’s sort of all over the place, but if you can get down with the puzzling geopolitics at play, you’ll relish in the beautiful tenderness.

The first season of the anime sees Violet gain fame as a thriving Auto Memory Doll while she reflects on her troubled past. Violet Evergarden: The Movie picks up some times later with Violet still struggling to define her identity and reunite with people she thought lost. Bittersweet with stunning animation, Violet Evergarden is one of Netflix’s best anime series, and the movie concludes her story in spectacular fashion.

Violet Evergarden: The Movie will be released on October 13, 2021.

Would you risk your life in a deadly game to win a massive fortune? That’s the question asked by the South Korean survival drama series Squid Game, in which 465 people risk their lives playing children’s games for the chance at 45.6 billion Korean won (around $38.6 million).

Games like “Red Light, Green Light” appear with gruesome results for the losers. Instead of hurting one’s childish ego, losing means certain demise. The overall execution here feels a bit like Hunger Games meets Saw and The Purge in a twisted dystopia, but it’s hard not to be enraptured by the fierce competition. Visceral action, strange circumstances, and haunting costumes all make Squid Game the perfectly eerie October watch.

There’s a reason why Netflix’s app boasts it as the #1 most-watched series (at least on my profile anyway). Variety reported in late September that Squid Game may wind up being the platform’s most-watched series ever. Don’t you want to be able to tell your friends you watched it first?

Into the Night is a terrifying Belgian apocalyptic sci-fi series in which our beloved Sun turns hostile. IRL, the star naturally flips its polarity about every 11 years, except in this universe, this shift causes the Sun to generate tons of electromagnetic radiation instead. Therefore, during the new “daytime,” the radiation alters organic particles so drastically that it’ll annihilate any exposed human being.

Season 1 follows the passengers of a hijacked plane trying to outrun the daytime, and the recently released Season 2 sees a natural continuation of the same drama: How do you survive when you have to forever stay during the night? We won’t spoil the significant shift between seasons, but it’s a doozy.

Into the Night Season 2 was only just released in early September, and a submarine-set spin-off is in the works for next year. So this is a budding franchise worth getting into sooner rather than later.

In this mystery that dabbles in interdimensional beings, the three Locke siblings return to their ancestral home of Keyhouse after their father’s murder only to find it full of magical keys with various powers. What they awaken, however, is a horrible creature from... somewhere else. Locke & Key has some sinister Narnia vibes that make it more dark fantasy. Still, the keys themselves all feel sci-fi — especially when they unlock doors that lead to extradimensional spaces.

Netflix bills this series as “a coming-of-age mystery about love, loss, and the unshakable bonds that define family.” Locke & Key handles such heavy themes rather well, and the same goes for its approach to various horror tropes. It’s just a shame that uneven pacing and some boring plot threads hold it back. All things considered, this good but maybe not great series does deliver a spooky and satisfying watch.

Liz Ortecho returns to her hometown of Roswell, New Mexico after a decade away. Almost immediately, she discovers that her high school crush is an alien. They rekindle some seriously — and literally — electric chemistry for what becomes a sizzling romance first and science fiction drama second. Sadly, the truth behind the mysterious demise of Liz’s sister years prior threatens to destroy their blossoming interspecies romance.

Roswell, New Mexico is the story’s second TV adaptation of the young adult book series called Roswell High. While this iteration doesn’t do enough to differentiate itself from its predecessor, it’s still solid B-tier content from The CW. Riverdale fans who are into aliens might love it. The CW execs are also fans. Not only does Season 3 land on Netflix at the end of the month, but a fourth season is also in the works.

Attack on Titan brilliantly marries the zombie and kaiju subgenres of horror in a bizarre steampunk-ish reality where giant naked humanoids (called Titans) terrorize the regular people so much they built enormous walls to keep them out.

This wildly entertaining and horribly graphic anime series follows young Eren Yaeger, who lost both parents as a boy and enlists in the military to get revenge against the Titans. Like so many anime before it, Attack on Titan’s protagonist is indeed very special: During a dramatic battle, he discovers the ability to transform himself into a Titan powerful enough to turn the tide in the neverending conflict.

The first season is positively electrifying, exploring Eren’s trauma and introducing us to a compelling supporting cast. As the story evolves, we uncover dramatic conspiracies about the truth behind the world that I won’t spoil here. Attack on Titan draws a lot of inspiration from Neon Genesis Evangelion, particularly in its use of an emotionally fragile lead character.

Netflix’s beloved sci-fi horror darling Stranger Things is great all year round, but October is always the perfect time to watch Season 2 in particular, which begins in the days leading up to Halloween.

In case you didn’t know (or don’t remember), Stranger Things follows a group of D&D nerds in the ’80s who freak out after their Wizard goes missing. Party balance is essential, so while they investigate, they uncover supernatural mysteries in their quaint small town of Hawkins, Indiana. They meet a powerful telekinetic girl and discover that local military experiments ripped a hole into a terrifying dimensional plane the boys call The Upside Down.

Horrible Lovecraftian monsters have emerged in the show’s three seasons, and things are getting even more interesting in the upcoming Season 4 — which just received a new trailer in September. It’s slated for release sometime in 2022, but now’s the perfect time to brush up on the first three seasons.

This animated sci-fi anthology series from Deadpool director Tim Miller is produced in collaboration with David Fincher. The episodes vary between five and 15 minutes and use different animation styles to tell stories within the realms of sci-fi, fantasy, horror, and comedy.

In one episode, three robots go sightseeing in a post-apocalyptic city long after humanity is gone. In another, Hitler dies in various ways across several alternate realities. The series is wildly entertaining and a visual spectacle, although a few episodes feel incredibly regressive. Season 2 was released in May 2021, delivering terrifying and compelling worlds.

Netflix’s beloved series of cautionary tales about the future dangers of emerging technologies, Black Mirror, is always scary and unsettling. Black Mirror does this through the lens of horror, sci-fi, and satire in equal measure. It’s an anthology exploring a myriad of different characters and concepts, making it possible for all sorts of immensely skilled actors to dip in and out.

Many of the show’s episodes are frightening, so much so that there are entire roundups of the 15 scariest episodes from across the show’s five seasons. Watch any of the 22 episodes, though, and you’ll either groan in disgust or cover your eyes in abject horror. There’s a reason why Black Mirror remains one of Netflix’s longest-running and most widely praised originals.