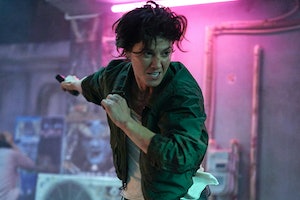 Netflix’s August lineup included excellent additions like Deep Blue Sea and Space Cowboys, but September really kicks things up a notch as we head into autumn.

There’s a mix of must-see classics like Blade Runner alongside lovably bad superhero flicks like Green Lantern. And if you like sharks, know that the entire Jaws catalog is swimming its way onto Netflix later in the month.

For anyone looking to indulge in some science fiction this September, consider these 11 shows and movies. We pay special attention to what’s new, original, or leaving Netflix soon. But on some level, it’s all stuff that’s important to watch in a timely fashion.

A criminal operative has less than 24 hours to exact revenge on her enemies before an obscure poison kills her, and along the way on this hyper-violent adventure, the titular Kate bonds with the daughter of a previous mark that she killed. The premise is almost identical to Jason Statham’s Crank (2006), except this movie follows a female assassin instead of a high-end deliveryman. The aesthetic is very neon cyberpunk, and while this is more of a realistic action film rather than science fiction, it’s close enough.

Like Gunpowder Milkshake before it, Kate is definitely going for some John Wick vibes with perhaps a touch of Logan as this dying assassin begrudgingly looks after a youngster. If you enjoyed Mary Elizabeth Winstead’s unhinged performance as Helena in Birds of Prey, then Kate is sure to be a real treat.

Kate will be released on Netflix on September 10.

10. Scott Pilgrim vs. the World

Based on Bryan Lee O'Malley’s graphic novel series, the movie follows Michael Cera as Scott Pilgrim, a slacker musician who must battle the seven evil exes of his cool new girlfriend Ramona Flowers played by Mary Elizabeth Winstead. (Yes! The very same actress in Kate.) Set in the vibrant Canadian city of Toronto, Scott Pilgrim vs. the World uses has a power punk vibe and comic book visuals. It also uses real bands like Beck and Metric. Actress Brie Larson even performs the vocals for a special version of Metric’s excellent “Black Sheep” (seen above).

Scott Pilgrim is light on the sci-fi elements, but they’re definitely there, albeit closer to magical realism. In the graphic novel, Ramona travels through subspace! So we’ll allow it.

Scott Pilgrim vs. the World will be removed from the Netflix library on September 15.

Is there any film more important to science fiction than Blade Runner? Like 1984 long before it, Blade Runner paints a startling, dark vision of the future — 2019 — that in retrospect feels bleak but also prescient.

Ridley Scott's cyberpunk masterpiece was originally released in 1982 with Harrison Ford starring as Rick Deckard, a former policeman tasked with tracking down bioengineered humanoids known as Replicants. This futuristic noir tale stacks overlapping mysteries atop each other, making you question the nature of humanity itself.

For anyone who hasn't seen Blade Runner yet, the "Final Cut" version is the 25th-anniversary version recut by Ridley Scott and released in 2007. It deepens the mysteries with new sequences without overexplaining, which was a complaint some had about the original cut.

Writer-director Neill Blomkamp seemed like a visionary after the success of District 9 in 2009. Set in South Africa, it was a humane story of a refugee crisis — despite the fact that all of the refugees were literal aliens. Despite a star-studded cast, his second follow-up Chappie struggles as a mere cult classic. Blomkamp was once attached to an Alien sequel but theorized that after Ridley Scott saw Chappie, he canceled the project. While it’s not that bad, the film does struggle in some areas.

Chappie follows a police robot in the future who gains artificial intelligence and is taken in by gangsters. The film’s overall message comes across as a bit muddled due to some strange plotting and an uneven amount of focus given to some of the characters. Perhaps the greatest sin of all is that Chappie himself comes across as a bit unlikable. Still, Chappie feels like an important moment in cinematic history worth seeing if you like Blomkamp’s work — or emotional robots.

Chappie arrives on Netflix on September 1.

In the Deadpool 2 post-credits scene, Deadpool shoots Ryan Reynolds in the head while the movie star gazes lovingly at Green Lantern’s script. (To be fair, Ryan Reynolds plays all of these characters, so it’s less weird than it sounds.) Reynolds did famously say he was “unhirable” after the 2011 film.

Aren’t you curious why?

Reynolds plays Hal Jordan, a rowdy test pilot who is selected to receive a magical cosmic ring from the Green Lantern Corps that gives him the ability to channel his willpower into the creation and manipulation of physical constructs. Meanwhile, a malevolent being known as Parallax makes its way towards Earth, threatening all of humanity. The film has some enjoyable parts to it thanks to the charm of its leading man and inventive constructs, but there are so many much better superhero movies out there.

The way aliens look in Mars Attacks! is totally absurd, so it should come as no surprise that we’re looking at the work of Tim Burton.

In this 1996 cult classic, a fleet of Martian spacecraft descend upon Earth, and after what seems like a miscommunication, they begin a full-on planetary invasion. Mars Attacks! has a bewildering number of recognizable actors in it, many of whom play bit parts before getting dismembered and/or killed by the Martians. Like Airplane or Animal House, Mars Attacks! is a full-on spoof that may be too ridiculous for some. But if you want to see something that lampoons the schlocky sci-fi stories of yesteryear, this is it.

The Martians will attack when Mars Attacks! invades Netflix on September 1.

In this lovable slapstick comedy, Eddie Murphy plays two versions of himself: the portly scientist Sherman Klump and his fit and confident alter-ego Buddy Love. After he’s terribly embarrassed while on a date, Sherman creates and takes an experimental formula that temporarily reconstructs his DNA, changing his personality and causing him to shed 250 pounds in seconds.

This very silly comedy of errors is all fun and games until Buddy gets other plans to try and erase Sherman entirely. The science is complete nonsense, but at a brisk 96 minutes, The Nutty Professor is worth it for getting able to watch Eddie Murphy in his prime — and while playing every single member of Sherman’s extended family.

The Nutty Professor transforms onto Netflix on September 1.

I have a real soft spot for Deep Blue Sea, but we have to give credit where credit is due: Jaws is the OG when it comes to shark horror movies. Some odd 46 years later, the original Jaws is still an incredible achievement in visual storytelling and practical effects. The fact that all four official Jaws movies are coming to Netflix in the middle of the month is inconsequential. The other three don’t hold a candle to the first — mainly because writer Peter Benchley and director Steven Spielberg weren’t involved.

You probably know how this goes: A man-eating shark plagues a summer resort town in peak summer, and the police chief teams up with a shark hunter and a marine biologist to take it down. It endured a famously troubled production with prop malfunctions and script rewrites mid-production, but the final product is one of the best films of all time.

If you want to reschedule shark week and have some kind of marathon, late September is the perfect time for it.

Jaws 1-3 and Jaws: The Revenge will swim onto Netflix on September 16.

It’s taken a long time for CBS to realize that Netflix still has a LOT of Star Trek shows and movies. Sure enough, their time has finally come to an end on the platform. The following shows are leaving Netflix at the end of the month:

ViacomCBS, which owns the rights to the franchise at large, is probably looking to consolidate all of Star Trek into Paramount+, the streaming service that has retroactively absorbed CBS All Access and the platform where Star Trek: Discovery and Picard are available. While Star Trek is arguably much less mainstream than Star Wars, it still boasts a devoted fanbase thanks to decades of solid TV programming.

Star Trek: The Next Generation and Star Trek: Deep Space Nine should theoretically remain on Netflix for a while longer, but for anybody who doesn’t have Paramount+, now’s the time to get in your Star Trek viewing.

Almost everything Star Trek is leaving the Netflix galaxy on September 30.

While you wait anxiously for Netflix’s live-action Cowboy Bebop, you can watch the original series over on Hulu. If you dig the overall grungy aesthetic of a fully colonized Solar System in an anime series, however, then a surprising option is the Netflix original series Carole & Tuesday.

In a dystopian future where computer programs can manufacture hit songs at the push of a button, two star-crossed young women form a charming musical partnership on a partially terraformed Mars. Carole is an orphaned refugee from Earth who plays the piano and bounces between jobs. Tuesday is the daughter of an affluent politician with a fancy Gibson acoustic guitar. Their rags to riches story is proof that genuine heart and human passion will always triumph over technology’s attempts to replicate them. And the music is genuinely great!

Carole & Tuesday is light on the sci-fi but it’s undeniably set in the distant future.

Don’t sleep on watching one of the greatest and most influential anime series of all time.

All 26 original Neon Genesis Evangelion episodes, along with The End of Evangelion film and the bonus extended episode EVANGELION: DEATH (TRUE)² are available on Netflix. Evangelion: 3.0+1.0 Thrice Upon a Time concluded the series with its release on Amazon Prime in August, but this is the series that started it all back in the ‘90s — and it holds up really well almost a quarter of a century later. (Much has been said in recent weeks about the release of Blu-ray editions!)

This complex sci-fi universe grapples with heady philosophical and existential concepts in familiar mecha anime trappings: a group of high schoolers must pilot giant robots to fight monstrosities, but it takes an enormous toll on them mentally and emotionally. Neon Genesis Evangelion tweaks the mecha and slice-of-life genres to explore how religion influences culture, particularly in a society on the brink of apocalypse. Perhaps more importantly, this hugely influential sci-fi epic established tropes you’ll recognize from across anime and even live-action sci-fi.