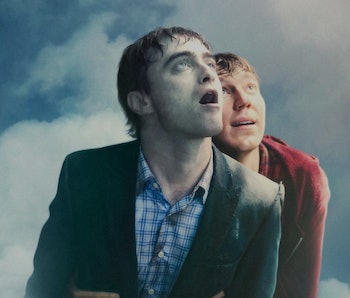 The new film Swiss Army Man is as wonderful as it is demented, and in a world where sequels and reboots are the norm, it’s also refreshing and completely unique. In directors Daniel Scheinert and Daniel Kwan’s feature debut, Hank (Paul Dano), a castaway who’s about to literally be at the end of his rope, is stopped when he sees a besuited body (played by Daniel Radcliffe) wash up on shore. Hank embraces the corpse, which he names Manny, and soon enough, begins riding its surprisingly powerful farts across the ocean. From there, the movie becomes a crazily surreal adventure about the unlikeliest of friendships and survival.

Upon its premiere at Sundance, the film was quickly labelled as the Daniel Radcliffe farting corpse movie. And though it’s so much more than that, we figured we’d take this opportunity to showcase some of the other scenes from movie history in which people break some serious wind.

You may feel like you’re too cool to laugh at Mike Myers doing his Austin Powers “Yeah baby!” bits now, but if you re-watch at the fart scene in the first Austin Powers movie and not crack up, it means you’re a hopeless, soulless, cynical snob. “How dare you break wind before me?” I’m sorry, baby, I didnt know it was your turn is one of the dumbest, wittiest lines of the ‘90s. Myers would return to the fart schtick with his other Austin Powers character Fat Bastard, but by the time the third film in the series, Goldmember, all the funny in the farts had run out.

The only Best Picture winner with a halfway decent fart or two in it, this scene from straight shooter filmmaker Kevin Costner’s western drama epic Dances With Wolves is hilarious both because of Costner’s zero charisma performance as curmudgeonly Lt. John J. Dunbar, as well as its droll “Were it not for my companion I believe I would be having the time of my life” voiceover. More Oscar winners need farts, and that’s a fact.

The inimitable comedy trio of David Zucker, Jim Abrahams and Jerry Zucker (better known as their collaborative abbreviation: ZAZ) were the masters of the spoof, and they parlayed their short-lived but still-legendary cop send-up Police Squad! into the Naked Gun series, which also starred Leslie Nielsen. His bumbling character Detective Frank Drebin couldn’t go an entire movie without passing some sort of gas, and the best example of this is in the series first entry. It isn’t the first time ZAZ let some loose on-screen, however. There’s also a great fart gag in their 1980 classic, Airplane.

Before he won an Oscar, Adam McKay made award-winning high-low comedies. The man has directed a long list of amazing scenes, including this fantastic fart sequence in the 2008 Will Ferrell and John C. Reilly buddy comedy Step Brothers. It remains arguably his best movie, if not the best McKay movie featuring tastable job interview farting.

Like The Naked Gun before it, the adventure of John Cho and Kal Penn’s pair of stoner best friends has had a surprising longevity. They escaped from Guantanamo Bay in 2008 and had a Christmas celebration in 2011, but it all started in 2004 when all they wanted to do was find some sweet, sweet White Castle to satiate their munchies. Like the series itself, the farting scene in question subverts a lot of expectations, mainly by having a pair of women fess up to the flatulence by playing “Battleshit” as our hapless pair has to witness it in all it’s stinky glory.

How do you interrupt the greatest comedic monologue in cinema history? Well, by breaking wind. Comedian Rodney Dangerfield’s turn in the absolute classic Caddyshack is as legendary as his country club dinnertime rant. It works mostly because it’s Dangerfield doing his normal “no respect” schtick, with the fart in question loosening up his stuffed-shirt dining guests.

Blame Canada. Trey Parker and Matt Stone’s epic South Park movie stirred up a lot of controversy for the vulgar subject matter and the fact that it’s an incredible musical. This foul-mouthed number, featuring flatulent Canadian comedians Terrance and Phillip is a precursor to the pair’s hilariously crass Broadway smash The Book of Mormon. But the scene the cartoon kids watch in the movie within a movie here, the appropriately named Asses of Fire, gives a whole new meaning to the word “scatting.”

Eddie Murphy is responsible for some of the most searingly funny stand-up comedy of the 1980s, and he’s also literally the man behind the one of the best fart scenes of the 1990s. Murphy’s movie career basically tanked after The Nutty Professor, but wow, what a way to go out. Everything about the scenes at the Klump family dinner table (featuring Murphy playing every character except Jamal Mixon as Ernie Klump, Jr.) is pure chaotic comedy madness that challenges you to not laugh at it.

Mel Brooks is the king of comedy both highbrow and low, and this infamous scene from Blazing Saddles straddles the edge of both. While plenty of scenes of Brooks’s satirization of the Hollywood myth-making of the American western are incredible, its this one that stands out. Perfect in its execution, there’s nothing funnier than the manliest cowboys sitting by a roaring fire in the prairie somewhere just unabashedly ripping farts without any acknowledgment of it. Consider that mythological character shattered.

The smelliest and foulest piece de resistance, Dumb and Dumber takes the cake (cow pie?) as the best fart scene to ever ripped through movie screens — and there’s more than one. Jim Carrey’s character Lloyd’s fart joke setup into its fart punchline is cinematic genius because you don’t even see the passed gas, you only see the riotous illuminated faces of the people inhabiting what we find out is Carrey’s character’s ski-lodge dream. But back in reality is everyones brown nightmare.

Carrey slipped Jeff Daniel’s dopey character Harry some laxatives because he was making the moves on the girl he had his eye on, and when Harry shows up for a nice romantic evening, all hell (and his bowels) breaks loose. The sound design, Daniels’s physicality, and the utter absurdity of it all is truly the best fart or farts to ever smell up the movies.