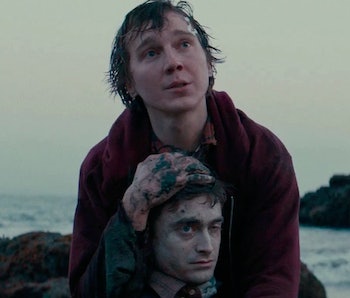 Since its premiere at Sundance in January, Swiss Army Man has been largely known as the movie in which Daniel Radcliffe plays a farting corpse. And while that is no doubt an accurate and important detail, it is hardly the only transgressive — and strangely beautiful — element of directors Daniel Scheinert and Daniel Kwan’s feature debut.

Perhaps even more radical than a flatulent co-lead in rigor mortis was the decision to score the entire film based on, perhaps, the most annoying song of all time: “Cotton Eye Joe,” the malignant earworm by Swedish novelty electronic band Rednex, a staple for bad wedding DJs and aural terrorists in the ‘90s.

“We were at the Sundance Labs and I remember one morning, Dan [Kwan] came up to me and was like, ‘Hey, what if the whole movie was just scored by the worst song?’” Scheinert remembered gleefully during a conversation with Inverse in Manhattan on Monday. “And then we had a debate about what to use. For a while we wanted to use, ‘With Arms Wide Open’ by Creed. We thought, what if that’s the song he can’t get out of his head? It was that and ‘Cotton Eye Joe’ that we were weighing.”

It was a battle of options very worthy of being considered the absolutely worst song to ever get stuck in one’s head, which is the fate inflicted upon Hank, the desperate, suicidal man stuck on a desert island played by a very convincing Paul Dano. But the sheer annoyance factor of the Swedish electronic-country band’s song wound up winning out, and it was aided by the fact that “Cotton Eye Joe” is a legitimately awful song – for reasons beyond its high-pitched yammering and noxious fiddle riffs.

In fact, the history of “Cotton Eye Joe” is murky, as is the case with most songs that came out of the folk and hymnal traditions of the antebellum South. Its origins are unclear, but it’s been covered and rejiggered many times over the last 200 years, but for the most part, Scheinert nails its original spirit: The song was a racist tune that utilizes awful, racist stereotypes about black people, who were slaves in America when it was initially written.

Swiss Army Man certainly is not endorsing the context or content of the song. The movie’s composers, the band Manchester Orchestra, stretches and twists and remakes the old folk tune into something beautiful, haunting, ethereal, and often inspiring; it’s a perfect for a song meant to be sung entirely in a lonely character’s head. And it’s all done without instruments.

And importantly, the use of the song, even in all its transformed beauty, is not meant to be any sort of ironic statement, or a self-imposed creative challenge somehow conquered. As the directors point out, the use of “Cotton Eye Joe” actually fits in with one of the movie’s overarching themes: Rediscovery and reclamation through recycling.

“The whole movie is taking things we hate and things we want to throw away and elevate them into something wonderful,” Kwan said. “Terrible songs that get stuck in your head get stuck in your head for a reason. There’s something catchy about it, and something that sticks, and we just wanted to use that in the music as well as the trash that they build props out of, or the fact that the whole film is scatological but also philosophical.”

Swiss Army Man hits theaters in New York and LA on Friday, and expands nationwide after that.